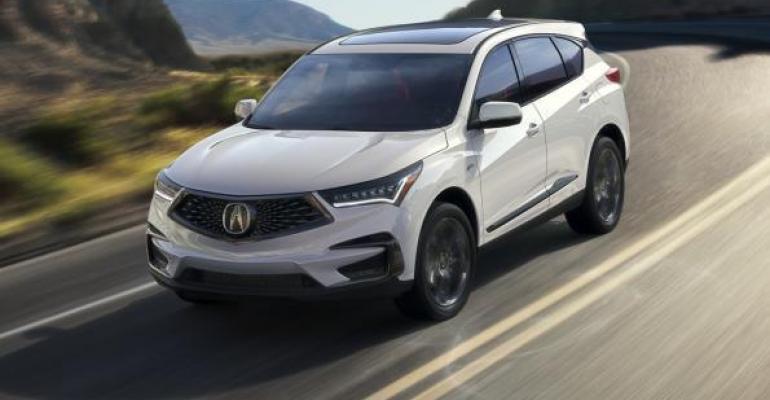 Third-gen RDX on sale next month in U.S.
Industry News

Competing CUVs such as the Audi Q5, BMW X3, Mercedes GLC and Volvo XC60 were benchmarked for the third generation of Acura’s compact luxury utility vehicle.

WHISTLER, BC, Canada – Acura hopes to woo buyers of the Audi Q5, BMW X3, Mercedes GLC and Volvo XC60 to its third-gen RDX.

“Those four brands really resonate with (luxury buyers we surveyed) as sort of the benchmarks, or what they consider to be the exciting vehicles,” Gary Robinson, senior manager-product planning for American Honda, tells media here at a ’19 RDX preview.

“So we set our sights very directly on these four competitors. And we think we built a vehicle that cannot just compete with them, but offer something unique and better than what they offer the market today.”

To best those four European-brand CUVs, Acura says it dialed up the performance and styling of the RDX, admitting the outgoing second-gen model lacks those “emotional” attributes the Audi, BMW, Mercedes and Volvo CUVs have in spades.

Honda’s 10-speed automatic transmission, debuting last year in the Odyssey minivan and also used in the refreshed Acura RLX sedan, is installed in the RDX, with Frey noting there now is a more responsive downshift pattern compared with the ’18 RDX’s 6-speed automatic.

Acura surveyed customers and found they wanted faster downshifting during highway passing, when torque is needed quickly. Frey says the new 10-speed will downshift from 10th gear to sixth gear to the passing gear of fourth 750 milliseconds faster than the outgoing RDX’s 6-speed auto goes from sixth to fourth to its passing gear of third.

To amp up the look of the RDX, the vehicle was Acura’s first ground-up redesign influenced by the brand’s Precision Crafted exterior and interior concepts.

From Acura’s signature diamond pentagon grille flow sculpted hood lines, says RDX exterior designer Randall Smock. The CUV’s profile is “wheel- and fender-centric” to hint at the engine under the hood, while a diving character line bisects both fenders and extends rearward to frame the rear taillights.

Acura also aimed to improve the premium qualities of the RDX. Officials here say it did this by lengthening the vehicle’s wheelbase to increase passenger space, as well as by using real wood and metal trim in the interior.

Robinson tells WardsAuto the performance credentials of the new RDX, as well as Acura’s heavy marketing of the NSX sports car, should help get performance-focused European CUV buyers to consider an Acura.

“I think when we say we care about performance, hopefully they’re more inclined to believe that and at least give (the new RDX) a chance,” he says in an interview.

Acura is mid-pack in Wards Intelligence data’s Middle Luxury CUV segment, with 15,326 RDXs sold through April in the U.S.

The sales leader among C-platform middle luxury CUVs is the GLC, with 22,113 deliveries in the year’s first four months. The Q5 also outsells the RDX, with 19,305 sold in the January-April period.

Acura acknowledges fellow Japanese luxury brands Lexus and Infiniti’s respective small CUVs, the NX and the QX50, likely will be cross-shopped heavily against the RDX.

Whereas there were just a few players in the segment when Acura launched the RDX in 2006, the group now is packed, and popular. Robinson notes one in four luxury vehicles sold in the U.S. today is a compact CUV.