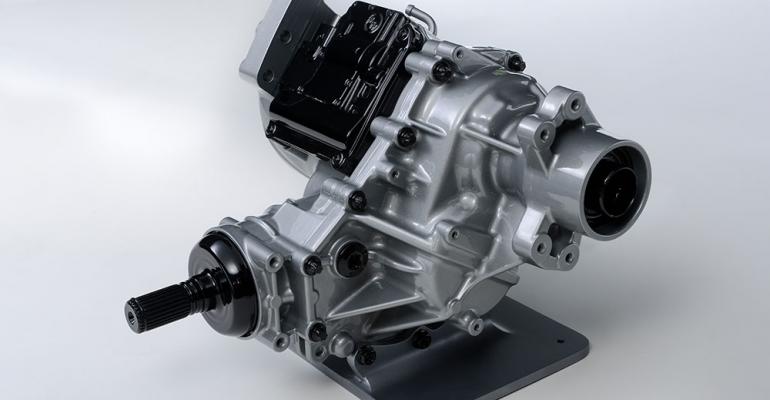 The EcoTrac system eliminates up to 80% of AWD parasitic drag by disconnecting most of the friction-producing driveline parts when it is not necessary to have all four wheels engaged.

DETROIT – SUVs and CUVs that offer good fuel economy and also are seriously capable offroad are rare birds, but the new all-wheel-drive Jeep Cherokee is managing to wear both hats convincingly.

According to Fueleconomy.gov, 4-cyl., AWD versions of the Cherokee get up to 28 mpg (8.4 L/100 km) on the highway and V-6s slightly less. There are competitors in the segment with better mileage, but they would not last long following the Cherokee down the boulder-strewn Rubicon Trail.

The Cherokee’s first-of-its-kind 9-speed automatic transmission gets much of the credit for the truck’s efficiency, but another piece of new technology, American Axle & Manufacturing’s EcoTrac Disconnecting All Wheel Drive system, also deserves recognition for improving efficiency.

The EcoTrac system eliminates up to 80% of AWD parasitic drag by disconnecting most of the friction-producing driveline parts when it is not necessary to have all four wheels engaged. And it tries to keep the system in 2-wheel FWD mode as much as possible.

This carefully controlled transmission of power to each wheel translates to a fuel-economy improvement of up to 3 mpg (1.3 km/L) on front-wheel AWD systems, says Philip Guys, AAM vice president-engineering and development.

“We set out to address one of the significant issues of the traditional FWD-based AWD products where they have a clutch system bolted onto the back drive and the gearbox in front and the driveshaft rotates with the transmission and the rear axle rotates with the rear wheels,” Guys says.

“We are taking all those parasitic losses out of the system when AWD functionality is not needed,” Guys says.

When driving conditions require the traction and stability that AWD provides, the system can seamlessly engage the rear wheels in 500 milliseconds or less, Guy says.

The rear wheels will engage even sooner if the system is placed in drive modes designed for mud or snow, paying a slight penalty in fuel economy. The EcoTrac system also slips into a faster-reacting mode if sensors detect outside temperatures are below freezing or the windshield wipers are operating, indicating slippery conditions.

AAM also has developed a 2-speed version that uses additional planetary gear sets in the front and the rear that provide low-range capability for maximum traction off road. This creeper drive is a key selling point for the Trailhawk, the version of the Cherokee aimed at serious offroading enthusiasts.

EcoTrac represents a major expansion by AAM beyond its bread-and-butter products of axles for rear-wheel-drive pickups and SUVs. It invested $100 million and hired 500 workers to produce the system at its plant in Three Rivers, MI. There are five patents on the system and nine more are under review.

However, the system is not without competition. The Range Rover Evoque is expected to debut soon with a disconnecting AWD system made by another supplier based on a different design.

AAM officials decline to comment on production volume or future customers, but a spokesman says it is likely EcoTrac will find its way on related Chrysler platforms and on platforms from other automakers. EcoTrac is designed to be scalable and can accommodate both larger and smaller powertrains, Guys says.

The exclusivity agreement with Chrysler for the single-speed version has expired and AAM is lining up new customers. Chrysler still has exclusive rights for the 2-speed version for “a couple more years,” a spokesman says.