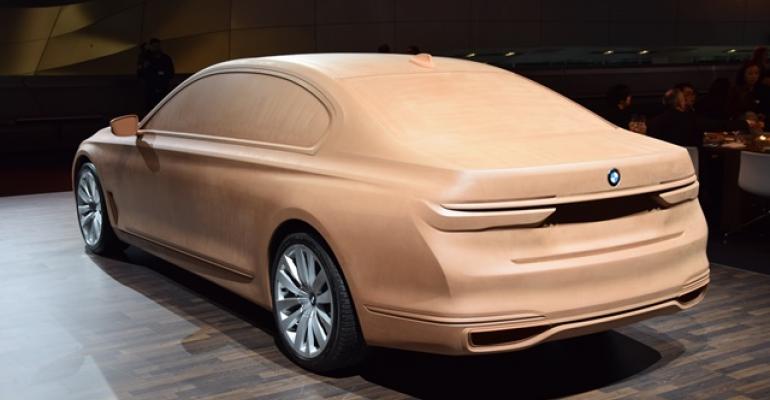 Is This 7 BMW’s Lucky Number?

The 7-Series represents BMW&rsquo;s flagship car, but it never has led its segment in U.S. sales. Since its U.S. arrival in 1980, it has trailed at various times the Mercedes S-Class, Lexus LS and Jaguar XJ.&nbsp;

MUNICH – It’s been five years since BMW had a serious chance to do what it had never done before: achieve the No.1 sales position in the Upper Luxury car segment.

The U.S. economy still was feeling the effects of a devastating recession in 2010, the first full year in the market for the new 7-Series, and deep-pocketed consumers were slow to crack open their wallets for vehicles with 6-figure price tags. If the recovery was about to begin, BMW was happy to lead the way with the 7-Series.

Still, despite having the freshest entry in the segment, BMW’s 7-Series finished 2010 trailing both the Lexus LS and Mercedes S-Class in the U.S.

That year, BMW sold 12,253 7-Series sedans, and it had never been closer to the No.1 sales position in the Upper Luxury segment, according to WardsAuto data. The next four years, the flagship would trail the S-Class and, in 2013 and 2014, the Tesla Model S.

As important as the 7-Series is, its sales lagged behind the Jaguar XJ from 1980 to 1990. That’s about the time Lexus launched the LS, and it generally trounced the 7-Series for the next 18 years.

But the true nemesis for the 7-Series is the S-Class, a sedan that benefited from a big head start. It was No.1 through the 1980s, then trailed the LS for much of the next two decades.

BMW has tried with each new iteration of the 7-Series to challenge the S-Class, but there are only three years when the Bavarians prevailed over Stuttgart in U.S. showrooms: 1997, 1998 and 2002.

It was a few years later that Mercedes drove the knife a little deeper with the introduction of the CLS, a premium 4-door with a handsome coupe-like profile. Its first year in the market, 2005, netted nearly 15,000 units.

The segment got even more crowded in 2009 when Porsche came along with the 4-door Panamera. The car has been a success.

Against this backdrop, Audi had been sticking to its low-volume knitting with the lovable A8, but Ingolstadt took a radical step in 2011 by rolling out the A7, a coupe-like hatchback with excellent driving dynamics and drop-dead good looks inside and out.

But the real shakeup in the sector came last year with the all-new S-Class, featuring advanced technologies not even available in ultra-luxury cruisers from Bentley and Rolls-Royce, for a fraction of the price.

With a spectacular and dramatically lit interior, the S-Class racked up 25,276 deliveries in 2014, outpacing the No.2 7-Series nearly 3-to-1, according to WardsAuto data. The S-Class also won a Ward’s 10 Best Interiors award in 2014.

BMW executives are reluctant to predict sales of the new 7-Series, which has a significantly improved interior and may continue the tradition of excellent ride and handling.

But the conservative exterior styling of the car unveiled here this week suggests the product planners saw no need to radically change direction with the 7-Series.

It’s possible the car’s core audience once again may consist of consumers who value innovative powertrains and driving dynamics above all else, and that might be perfectly fine with the Bavarians.