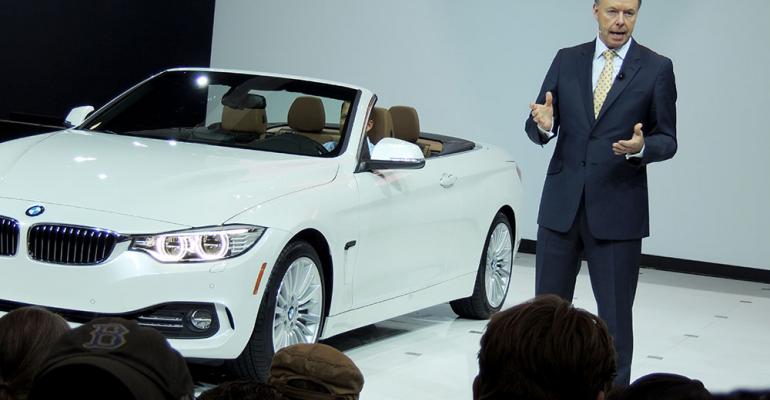 The 4-Series coupe is a new nameplate, which means WardsAuto will count it separately from the 3-Series. Subtracting coupe sales from the 3-Series tally will open the door to Mercedes&rsquo; C-Class becoming America&rsquo;s best-selling luxury car.

LOS ANGELES – As the new BMW 4-Series coupe arrives now in U.S. showrooms, it poses a statistical quandary that could upset the automaker’s claim of having the best-selling luxury car in the U.S.

Since 2000, the 3-Series has held that crown, according to WardsAuto data. Through October, BMW has sold 89,834 3-Series cars, including coupe, convertible, sedan and wagon body styles. The auto maker has said coupes make up 18% of 3-Series volume.

The 4-Series is a new nameplate, which means WardsAuto will count it separately from the 3-Series. Subtract 18% from the current sales tally through October, and 3-Series deliveries would fall to 73,664 units. Meanwhile, rival Mercedes-Benz has sold 73,144 C-Class cars, also of varying body styles, including coupes.

So both vehicles would stand within 500 units of claiming the title as best-selling luxury car. A new C-Class arrives next year and can count on an increase in demand, potentially giving it the title of top luxury seller.

Ian Robertson, BMW board member in charge of sales and marketing, says the automaker considers the 3-Series and 4-Series to be in the same family of products. “We intend to maintain our position as the strongest player in this segment. We invented it,” he tells WardsAuto after the automaker’s press conference here unveiling the 4-Series convertible.

Robertson remains hopeful when asked if he believes the 3-Series can outsell the C-Class in 2014 without 4-Series coupes in the mix.

“We are in the sixth generation of 3-Series. It’s had enormous success. Sales this year are up 26% on last year,” he says. “As they say, the story doesn’t end here because more cars are in the pipeline, too.”

For instance, BMW has added another 3-Series body style, the Gran Turismo, with a liftgate.

The automaker debuts several vehicles here, including the X4 Concept, a broad-shouldered variant of the X3 CUV. The X4 will be assembled in Spartanburg, SC, and goes on sale in 2014.

Robertson likens the X4 body style, with its high seating position, to that of the larger X6, which has recorded 200,000 sales worldwide since its introduction five years ago. He says very few X6 customers traded in an X5, a more conventional luxury CUV that has been re-engineered for this year.

“Mainly, they came from other brands,” he says of X6 customers. “I think with X4, we’ll also bring people into the group as well. It will be a conquest car in a lot of respects.”

Also unwrapped here is the production version of the eagerly awaited i8, which BMW considers the world’s first plug-in hybrid 2+2 super car.

With its dramatic styling, dihedral doors, low profile and lightweight carbon-fiber structure, the i8 goes on sale in spring with a base price of $135,700 and is capable of a 0-60 mph (97 km/h) sprint in 4.4 seconds.

The pricing places the i3 reasonably close to other EVs from mainstream brands, such as the Ford Focus and Chevrolet Volt. For the first time, BMW in a sense will be competing with non-luxury brands in the EV space.

“One thing you find is the costs of electrification are quite expensive,” Robertson says. “The players in the segment at the moment are not the usual competitors, because the price point pushes them towards where we are.”

Despite the pricing, BMW insists the i3 will be profitable. Robertson expects the EV will be warmly received.

“Everyone who’s driven the car is excited by the way it handles, the way it performs,” he says. “I think we will see customers who maybe don’t even buy motor cars coming in and being interested in the i products.”

He refers to central London, where EVs are not assessed a congestion charge, and Amsterdam, where EVs are granted free parking in addition to free charging. “That’s why we decided to have i3 as an urban vehicle with a shorter wheelbase and a tight turning circle.”

Most i3 buyers likely will come from outside the brand, Robertson says. “If I look at the incoming orders, we are sitting on 9,000-10,000 orders now. We don’t know a lot of these customers. This is what we wanted.”