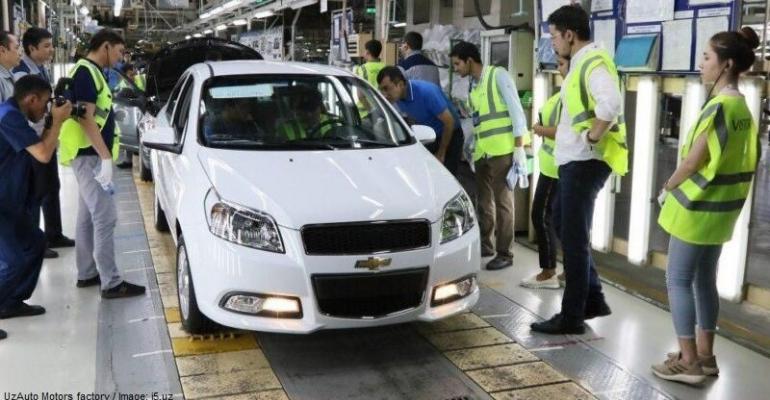 The automaker says the Chevrolet Tracker crossover is expected to be one of the first new models to be manufactured at the Uzbek plant. Trackers currently in the market are imported to Uzbekistan from China, priced at $15,800.

Uzbek UzAvtoMotors, a former General Motors-Uzbekistan joint venture, is preparing to launch production of new Chevrolet models based on the modular GEM platform for the Russian market, according to the company and local media reports.

Uzbek media report the project will be financed by a €150 million (US$183 million) loan from Credit Suisse. The Asaka plant has a new welding shop with capacity to produce up to 60,000 car bodies per year. Capacity will be expanded, but for now the Asaka plant assembles Chevrolet Spark and Cobalt and Ravon Nexia models.

UzAvtoMotors says the Chevrolet Tracker crossover is expected to be one of the first new models to be manufactured at the plant. Trackers currently in the market are imported to Uzbekistan from China, priced at UZS167 million ($15,800).

The Russian Autoreview car magazine reports that in addition to Tracker, the company is considering producing the Trailblazer CUV and Onix sedan at the Asaka plant.

UzAvtoMotors says it sees strong demand for CUVs among Russia consumers, as well as potential to bring B-size CUVs and sedans to the Russian market.

The delivery of Chevrolet cars from Uzbekistan to Russia likely will continue through the territory of Kazakhstan to bypass certain customs duties.

Total investment in the new vehicle launches amounts to $500 million, which includes transferring to Asaka equipment and machinery from Korea to localize production of more than 200 components.