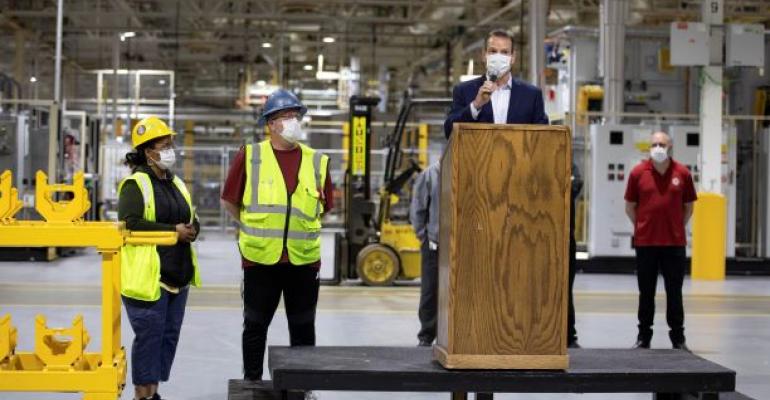 The UAW, which is facing the loss of jobs held by union members as the industry moves away from vehicles with internal-combustion engines, is pressing automakers such as General Motors and Ford for additional work and investment at plants in the U.S.

Facing increasing pressure from the UAW over the jobs tied to battery-electric vehicles, Ford is expanding production of EV components at a factory in suburban Detroit.

The Van Dyke Transmission Plant, in a nod to the advanced technology it will produce, will now be called the Van Dyke Electric Powertrain Center as it prepares to produce electric motors and electric transaxles for hybrid and fully electric vehicles such as the ’22 F-150 Lightning pickup truck.

“The advanced technology we are using at the Van Dyke Electric Powertrain Center is taking us to the next level for Ford’s electric future,” says John Savona, Ford vice president-manufacturing and labor affairs. “The electric transformation we are making now is going to allow us to scale quickly as customer interest grows for our new electric vehicles.”

Ford’s eMotor electric motor is expected to be at full production this summer, with one unit to come off the line every 75 seconds. The automaker says the eMotor can go into a hybrid transmission or into the eTrans electric transmission for a fully electric vehicle. The eTrans is expected to launch early next year.

The Van Dyke plant has 1,050 employees and CEO Jim Farley says Ford’s plans to vertically integrate into the automaker’s EV operations will lead to the creation of more jobs at the factory north of Detroit.

The UAW, which is facing the loss of jobs held by union members as the industry moves away from vehicles with internal-combustion engines, is pressing automakers such as General Motors and Ford for additional work and investment at plants in the U.S.

Union President Rory Gamble praises a bill drafted by U.S. Sen. Debbie Stabenow, D-MI, that would provide extra tax credits to anyone purchasing an EV built in the U.S. with union labor.

“Future jobs in America will be protected for decades to come through provisions that tie key consumer rebates for electric vehicles to good-paying union auto jobs,” he says.

The bill would maintain the $7,500 consumer credit for EVs but add, for the next five years, a $2,500 bonus for autos assembled in the U.S. and another $2,500 for meeting certain labor standards.

The Ford Mustang Mach-E CUV is assembled in Mexico, and the UAW recently slammed Ford over plans to build another EV there.

Gerald Kariem, the UAW vice president in charge of the union’s Ford Dept., notes the automaker’s announcement of a joint venture with SK Innovation to build EV batteries should open the door to more union jobs.

“UAW members believe that Ford has a moral obligation, regardless of any joint venture arrangement, to ensure that the battery jobs that replace gas-engine and transmission jobs are the same good-paying union jobs that have fueled this American economy for generations,” Kariem (pictured below, left) says in a statement. 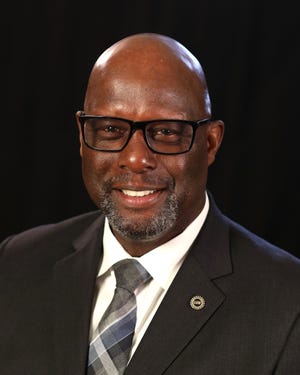 “UAW members deserve for these jobs of the future to be the good-paying union jobs that President Biden has called for repeatedly,” he says. “And in fact, the president reminded us again of that charge to corporate America at his (recent) Ford Rouge facility visit.

“Technological changes have always been an integral part of the auto industry but those changes, which seek to improve all of our lives, should not diminish the lives of hard-working American men and women,” Kariem says.

Meanwhile, the UAW is pressuring GM over union representation in battery plants operated by its Ultium joint venture with South Korea’s LG Energy Solution. GM now says it will welcome the UAW in the joint-venture plants, one under construction in Ohio and another planned in Tennessee.

In a statement, GM says it is willing and ready to work with the UAW in the new battery plants.

“As we deliver on our plans to create an all-electric future, GM will build on a long history of supporting unions to promote safety, quality, training and well-paying jobs for American workers,” GM says.

“Both GM and Ultium Cells LLC respect workers’ right to unionize and the efforts of the UAW to organize battery cell manufacturing workers in Ohio and Tennessee at our joint venture sites. When fully operational, these American battery facilities will employ more than 2,300 workers. We believe the UAW, given their historic and constructive relationship in the automotive industry, would be well positioned to represent the workforce,” the statement says.