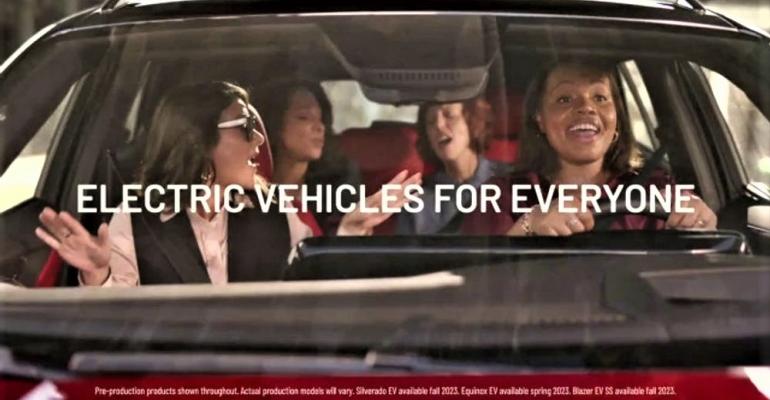 Chevrolet has the most-seen single automotive spot for the second week in a row, according to iSpot.tv.

Chevrolet’s ad highlighting its fleet of electric vehicles takes first place for TV ad impressions for the second week in a row, per data from iSpot.tv.

Impressions for the ad had a 37.8% week-over-week increase, driven in part by airings during MLB games as well as an uptick in NFL airings. According to an iSpot Ace Metrix survey, the ad had the highest Brand Match rating in the ranking: 82%, referring to the percentage of surveyed viewers who remembered it was a Chevrolet ad after watching it.

Subaru also retains its chart position from last week, again taking second place with a spot promoting the brand’s “National Make a Dog’s Day” initiative. The Voice and college football were among the programming during which the ad appeared.

Jeep owns two spots on the ranking, with combined impressions totaling over 371 million.

Its third-place ad for the Grand Wagoneer evokes a relaxed, ethereal feel with music from Ruelle. Estimated ad spend nearly doubled for this spot compared to last week, with impressions up 40% week-over-week. The fourth-place spot from Jeep highlights the new Grand Cherokee in adventuresome locations, declaring that it’s “made for what you’re made of.”

Sports and news programming were top drivers of impression counts for both Jeep ads.

Dodge rounds out the ranking with a departure from the other commercials: Instead of sweeping location shots, the spot goes high-octane with real footage from real people. Viewers responded well, with 27% citing the visual scenes as the single best thing about the ad, per Ace Metrix survey respondents.

3. Jeep: Discover Sound That Can Truly Move You

4. Jeep: Adventure Days: Made for What You Are Made Of

5. Dodge: The Real Brotherhood of Muscle