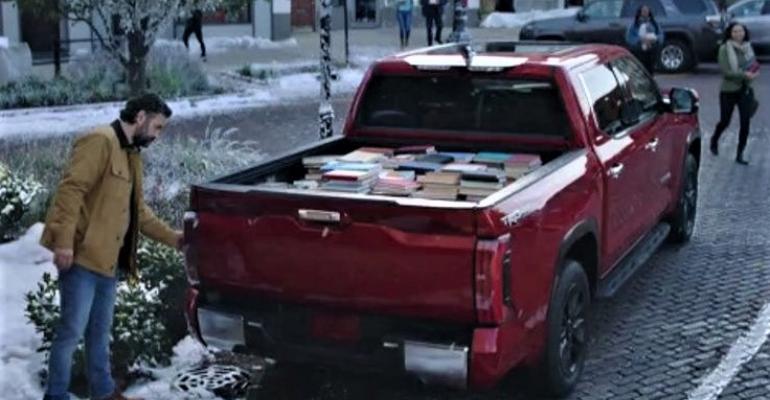 Toyota's No.1 ad for the week of Dec. 13, about restocking a small-town bookstore, features music from Kacey Musgraves.

A Toyota ad debuts atop iSpot.tv's weekly ranking of the most-viewed automotive commercials — the ads that have generated the highest number of impressions across national broadcast and cable TV airings.

The automaker's No.1 ad for the week of Dec. 13, about restocking a small-town bookstore, features music from Kacey Musgraves. According to iSpot’s Ace Metrix survey data, viewers found the message inspiring, with 37% of respondents selecting it as the single best thing about the ad (well above the 10% industry average).

The Toyota spot also scored 12.8% higher than the industry norm for likability, 9.5% higher for attention and 7.9% higher for watchability.

The other newcomer to the list is Chevrolet’s “Holiday Ride.” While third in overall impressions, the ad ranks first for estimated spend, at $7.2 million. That outlay helped increase the estimated national ad spend of all five ads on this week’s list by 35% over the previous week, totaling $17.5 million.

Nearly half of that (48%) was directed at NFL football. But only three of the ads on the list contributed to that football-focused total, with “Holiday Ride” doing the heavy lifting at an estimated $6 million.

Lincoln’s “Unexpected” slips to second from its top position the week prior, and Subaru retains both fourth and fifth, as well as the title of fan favorite. Both ads focus on Subaru’s corporate giving efforts, which according to Ace Metrix data continue to resonate well with viewers.

Of the two, “Give Back Anthem” retains a slight edge, scoring 16% higher than the industry norm for likability, while 51% of viewers named the message the single best thing about the ad. “The Largest Impact” tracks closely, however, with a likability score 14.7% above the industry norm.