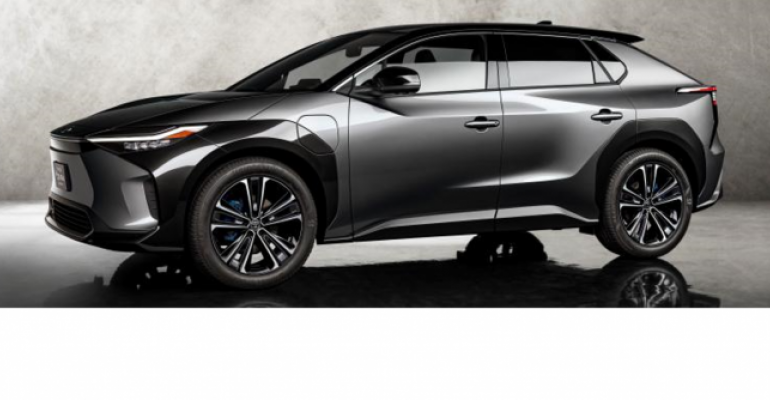 The automaker expects to add 70 production lines by 2030 to bring battery capacity to 200 GWh annually, but BEV volume will account for only about 25% of Toyota’s electrified-vehicle mix.

Toyota says it will invest big in battery technology and capacity over the next decade, but its views on full battery-electric vehicles remain conservative.

The Japanese automaker is earmarking ¥1.5 trillion ($14 billion) for development of next-gen batteries and production tooling between now and 2030. About two-thirds of that outlay will be for new capacity, which Toyota says will be located around the world so that batteries will be made where they are needed to support local vehicle production. The remaining ¥500 billion ($4.5 billion) will be spent on R&D, including development of futuristic solid-state batteries.

The investment will take Toyota battery capacity to at least 200 GWh by 2030, but officials note during a media backgrounder webcast today that that number could go higher depending on where BEV demand settles. To get to that 200 GWh-plus number, Toyota estimates it will need 70 new production lines by 2030.

For now, Toyota is aiming to sell 8 million electrified vehicles annually by 2030. But unlike some automakers that are planning more aggressive shifts to BEVs by 2030-2035, Toyota says only 25% of that figure – 2 million units – will be BEVs or fuel-cell electric vehicles.

In continuing to take a wait-and-see attitude on how the market will accept BEVs, Masahiko Maeda, chief technology officer, notes government policy, incentives and vehicle use-cases will continue to play a big role in how quickly and widely BEVs are adopted in each market around the world. He notes that in the U.S., use of fullsize pickups for towing makes it difficult to electrify.

“A fully electrified lineup is not in our plan,” he says.

The automaker says it is looking to improve battery performance and cut costs, but notes it seeks a balance to ensure safety, indirectly alluding to issues with BEV battery fires that have impacted some of its competitors, including General Motors. Targeted for 2025 is a 30% improvement in power and efficiency and corresponding 30% reduction in both size and cost. Maeda says Toyota will undertake much of the development in-house, pointing to the automaker’s leadership to date on battery patents. By 2030, Toyota wants to cut battery costs 50%.

As for more radical solid-state technology, which is aimed at longer life, faster charging and higher density (longer range) through the use of a solid, rather than liquid, electrolyte, Toyota says development continues but hurdles remain. Officials say they are working to find the right electrolyte material, because so far in testing solid-state batteries show faster wear than conventional lithium-ions.

The plan still is to have a solid-state battery on the road in the second half of the decade, but Toyota will debut the technology first in a conventional hybrid vehicle. In sticking with an emphasis on hybrids, the automaker notes that three hybrids equal the carbon-dioxide reduction of a single BEV.

“Because we can provide hybrids at comparably affordable prices…hybrids are an effective way to reduce CO2,” Maeda says, adding the 18.1 million HEVs Toyota has sold equals 5.5 million BEVs, but required the equivalent of only 260,000 BEV batteries.