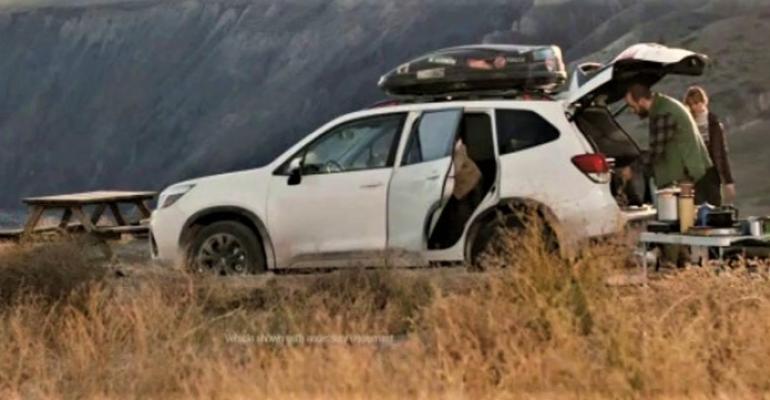 The two highest-ranked commercials promote the Subaru Forester and Outback.

Subaru boasts the top two positions in iSpot.tv’s latest ranking of the most-viewed automotive commercials – the ads that have generated the most impressions across national broadcast and cable TV airings.

Hyundai has the third-ranked ad for the week of March 29, followed by two Jeep spots.

Subaru’s first-place commercial takes a trip down memory lane as a family recounts the special moments they’ve enjoyed as Forester owners. Per an iSpot Ace Metrix survey, this ad performed above the norm for the auto industry in terms of watchability and likability, with viewers considering it “soothing” and “heartwarming.”

Of the survey respondents, 16% considered the message to be the single best thing about the spot.

Instead of starring humans, the No.2 ad (also from Subaru) features a four-legged family on a journey in their Outback, with the narrator proclaiming the model is “dog tested, dog approved.” According to Ace Metrix, this commercial performed above the auto industry norm for multiple factors, including watchability, attention, likability and relevance. Viewers thought it was “cute” and “memorable,” with 45% citing the characters as the single best thing.

Brand recognition for Subaru came in at 90% (meaning viewers overwhelmingly remembered it was a Subaru ad after watching it).

The No.4 ad from Jeep takes an adventurous theme and highlights multiple models in action, stating “freedom has no limits.” According to Ace Metrix, this ad performed above the norm for the auto industry for relevance, desire and likability, with viewers considering it “cinematic.”

Jeep’s fifth-place commercial focuses on the ’21 Grand Cherokee, which, the ad says, is the “longest-lasting 4x4 SUV brand.”

1. Subaru: For All You Love

5. Jeep: Only Things That Matter