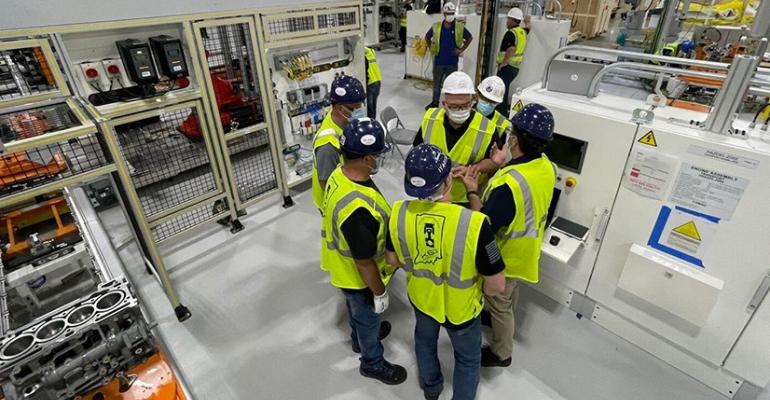 The new battery plant is part of Stellantis’ broad push into electrification under the Dare Forward plan the automaker outlined in March. Construction is to begin soon, and operations should begin in first-quarter 2025.

Stellantis and Samsung SDI plan to invest up to $3 billion in a new battery plant in Kokomo, IN, which has long built transmissions and engines used in Jeep, Ram, Dodge and Chrysler vehicles.

A UAW study notes jobs in engine and transmission plants are at risk as the industry moves toward electrified vehicles. For now, however, the union is banking on battery-production jobs going to UAW members.

Cindy Estrada, director of the UAW’s Stellantis Dept., says: “We are excited about today’s announcement and the company’s decision to locate this new battery plant in Kokomo, Indiana. We look forward to negotiating an agreement with Stellantis that brings this new plant under our master agreement with traditional wages and benefits.”

The new battery plant is part of Stellantis’ broad push into electrification under the Dare Forward plan the automaker outlined in March, Stewart says. Construction is to begin soon, and operations should begin in first-quarter 2025.

The Kokomo plant expects to have initial annual production capacity of 23 gigawatt-hours, with plans to increase to 33 GWh in the next few years. Total capacity would increase further as demand for Stellantis electric vehicles rises.

Yoonho Choi, chief executive officer of Samsung SDI, says Stellantis and officials from the City of Kokomo and State of Indiana helped clear the way for the new investment for the company’s first battery plant in the U.S.

“We have secured a solid foothold in a rapidly growing North American EV market through the joint venture with Stellantis. We will make sincere efforts to bring satisfaction to the market with top-class quality products in the future, and we will contribute towards meeting the climate change target,” Choi says.

In March, Stellantis outlined plans for building a new battery plant in partnership with LG Energy in Windsor, ON, Canada. The Kokomo factory will be the automaker’s second battery plant in North America and will supply a range of Jeep, Ram, Dodge and Chrysler BEVs now on the drawing board.

Stellantis has said it expects to have 25 BEVs on the road by 2030.

“Just under one year ago, we committed to an aggressive electrification strategy anchored by five gigafactories between Europe and North America,” Stellantis CEO Carlos Tavares says in a statement accompanying the announcement of the plant in Kokomo.