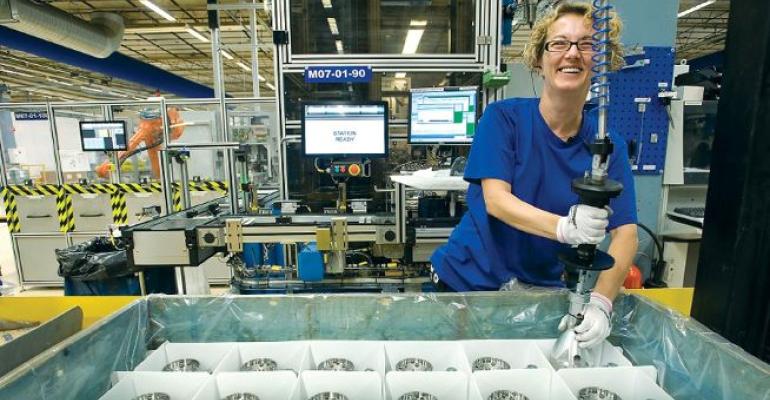 BorgWarner acquired the electronics and power electronics business of what was the old Delphi Corp. in October 2020. The Delphi name disappeared but the acquisition gave BorgWarner a foothold in the electric-vehicle business.

BorgWarner, long one of the auto industry’s top suppliers of parts for internal-combustion engines, is preparing to divide into two distinct companies through a tax-free spin-off of its fuel systems and aftermarket segments into a separate, publicly traded company.

The spin-off should be complete by the end of 2023, according to BorgWarner, which acquired the electronics and power electronics business of what was the old Delphi Corp., then known as Delphi Technologies, in October 2020. The Delphi name disappeared but the acquisition gave BorgWarner a foothold in the electric-vehicle business.

Alexis P. Michas, non-executive chairman of the BorgWarner board of directors, says the intended separation advances BorgWarner’s “electrification journey” while the new company pursues growth opportunities in alternative fuels, such as hydrogen, and in the aftermarket.

Following completion of the division, BorgWarner would consist of the current company’s e-Propulsion & Drivetrain and Air Management segments. It says it will be a market leader in EV propulsion, with an enhanced focus on the development and commercialization of EV technologies.

With continued execution of its electrification growth initiatives, the company believes it will achieve or exceed its stated target of 25% of revenue from EVs by 2025.

With Fuel Systems growing faster than the market and the aftermarket expected to benefit from favorable long-term trends, the new, spun-off company will be well-positioned for success as a stand-alone public corporation, says Frédéric B. Lissalde, BorgWarner president and CEO.

Through the first nine months of 2022, the Fuel Systems segment generated revenue of about $1.7 billion and segment-adjusted operating margin of 11.3%, while the Aftermarket segment generated revenue of just under $1 billion and segment-adjusted operating margin of 14.5%. The midpoint of the company’s guidance provided Oct. 27 included about $3.3 billion in revenue, after considering inter-segment eliminations from the fuel systems and aftermarket segments for the full 2022 fiscal year.