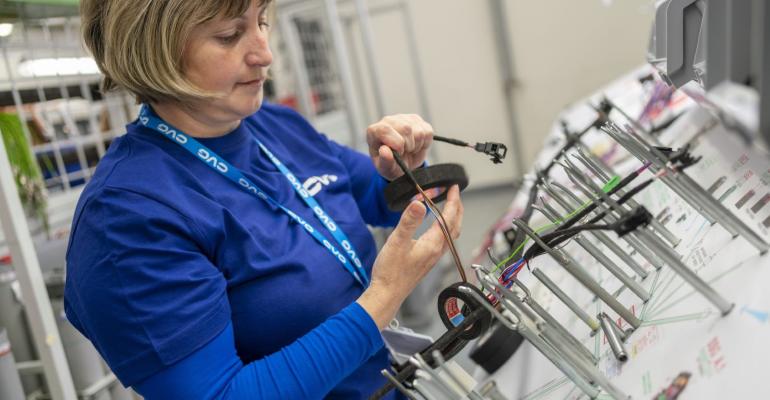 Suppliers in the Czech Republic are stepping into the breach to maintain stocks of the vital components in new Škoda vehicles. The Volkswagen Group subsidiary says it also is securing additional production capacities in Morocco and other countries.

Škoda has managed to offset one of the main automotive challenges during the Russian invasion of Ukraine by partially relocating cable harness production.

Cable harnesses are crucial components that form the electric and electronic architecture of vehicles. They typically are complex labor-intensive assemblies.

Before the war, Ukraine had become one of the major production hubs of cable harnesses for the automaker. Now suppliers in the Czech Republic are stepping into the breach to maintain stocks of the vital components in new vehicles.

The Volkswagen Group subsidiary says it also is securing additional production capacities in Morocco and other countries. The aim of the measures is to safeguard the company against potential further supply bottlenecks and disruptions to the supply chain in the future. The arrangements will allow for current production volumes to be doubled if necessary.

Owing to the war-related shortage of cable harnesses, Škoda had been forced to suspend production of the battery-electric Enyaq iV for eight weeks from the beginning of March. In response, the automaker in collaboration with cable manufacturer PEKM Kabeltechnik managed to relocate part of the cable harness production to Mladá Boleslav within five weeks of the war’s start. PEKM built the necessary production equipment in assembly halls provided by Škoda and manufacturing was gradually ramped up from the beginning of April. The production facilities are staffed by 35 women employees, brought in from the Ukrainian plant in Lviv, who are now training new employees. Cable-harness production for the Octavia, Kodiaq, Karoq and Superb model series will start in the coming weeks at Škoda’s headquarters.

Škoda has secured additional capacity from Kromberg & Schubert at the Moroccan plant in Kenitra near Rabat. In addition, that supplier has increased the number of cable harnesses manufactured at its Ukrainian plant in Zhytomyr.

Škoda also plans to double the production of high-voltage cable harnesses required to charge electric vehicles. From the end of June, these will be manufactured in Romania. From September onwards, production from the plant in Khmelnyskyj, Ukraine, will be doubled after consultation within the VW Group. Cable harnesses for the Octavia and Superb models will then also be produced in Tangier, Morocco.

Karsten Schnake, board member for purchasing at Škoda, says: “With great dedication, we managed to resume production in Ukraine within a short period and also significantly increase manufacturing capacities. At the same time, I can assure our Ukrainian partners that we are and will remain fully committed to them. They have our utmost respect for continuing to supply us as the circumstances permit.”