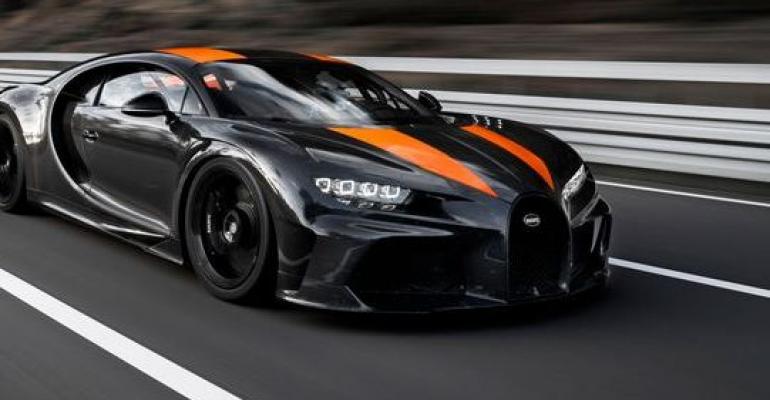 Combustion-powered Chiron could give way to electrified Bugattis.
Industry News

The Croatian electric supercar specialist reportedly is in advanced talks with Volkswagen and stakeholder Porsche to acquire the 111-year-old brand.

Volkswagen is considering a sale of Bugatti Automobiles to Rimac Automobili as part of a consolidation of volume production car operations at the German automaker, and Porsche looks set to play an integral role in the deal.

The proposed sale, although not officially confirmed, was the main topic at a recent Volkswagen supervisory board meeting, according to Germany’s Manager Magazin, which says Volkswagen Chairman Herbert Diess hopes to conclude contract signings by the end of 2020.

To enable Rimac to finance the purchase of Bugatti, Volkswagen-owned Porsche is expected to boost its current 15.5% shareholding in the Croatian-based electric supercar specialist to as much as 49%.

The increased Porsche shareholding in Rimac would enable Volkswagen to remain active in future decision-making at Bugatti, says one insider who told Wards talks between Volkswagen and Rimac are ongoing, with final decisions on the complex three-way purchase yet to be made.

Under a condition of the sale said to be proposed by Volkswagen, Bugatti would switch its focus from traditional combustion engines to electric-powered supercar production using electric driveline and battery know-how developed by Rimac for its 1,914-hp C_Two supercar.

The purchase by Rimac of Bugatti and the increased shareholding of Porsche would be dependent on the agreement of a number of current stakeholders, including Xiangyang, China-based battery specialist Camel Group and Hong Kong-based China Dynamics, sources suggest.

Rimac, headquartered in Syeta Nedelja near Zagreb, Croatia, was established in 2009 by Mate Rimac.

Under Diess, Volkswagen is undergoing a major reorganization with a focus on electric mobility and a renewed focus on volume production. The future of its upper luxury car brands, including Bugatti, Lamborghini and Bentley, as well as motorcycle manufacturer Ducati and Italian-based design studio ItalDesign, are all said to be under scrutiny as the company seeks to cut costs as it looks to fund the electric-vehicle plans of its volume brands Volkswagen, Audi, SEAT and Skoda as well as an extension of Porsche’s electric-car operations in cooperation with Rimac.