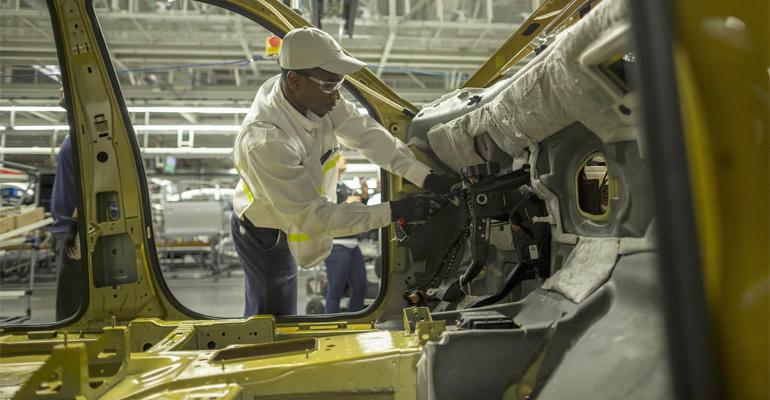 Volkswagen
VW lost eight weeks of vehicle production at its plant in Chattanooga, TN, due to COVID-19.
Industry News

“Yes, it was ragged. Yes, chaotic. Yes, we had to do things like put parts on airplanes” to keep assembly lines running, VW’s Scott Keogh says. In the face of COVID-19, VW’s U.S. sales were down 10% from 2019, compared to 15% for the industry overall, he says.

“I’m quite impressed with how 2020 turned out,” Keogh says in a conference call. “The expectation was, it was going to be far more severe.”

Largely due to coronavirus business shutdowns, for the full year the VW brand’s U.S. sales of 325,784 vehicles in 2020 were 10% lower than the previous year. That’s slightly better than an estimated sales decline for the whole U.S. industry of about 15% for 2020, to about 14.5 million, Keogh says.

Duncan Movassaghi, chief sales and marketing officer, says part of the VW brand’s sales increase in late 2020 was because deliveries were unusually low in late 2019 for the VW Passat during model-year changeover.

“We weren’t getting that in the prior-year period. We ran out, and we hadn’t launched the new model,” he says.

“Yes, it was ragged. Yes, chaotic. Yes, we had to do things like put parts on airplanes” to keep assembly lines running, which raises costs, Keogh says. But taking everything into account, he says the outcome for VW and for the industry is much better than anyone expected back in March or April.

Still, VW’s forecast for 2021 U.S. light-vehicle sales is on the conservative side, at 15.6 million, in line with projections from Wards Intelligence/LMC Automotive. Toyota Motor North America forecasts 16 million sales in 2021.

Keogh says VW’s forecast still represents a sales increase of more than 1 million units over 2020, which isn’t bad. Keogh says he’s “not naïve” about the coronavirus or high unemployment.

On the positive side for 2021, Keogh says interest rates remain low and consumer savings are on the increase. “I think the disposable income is there” to support higher 2021 auto sales, he says.