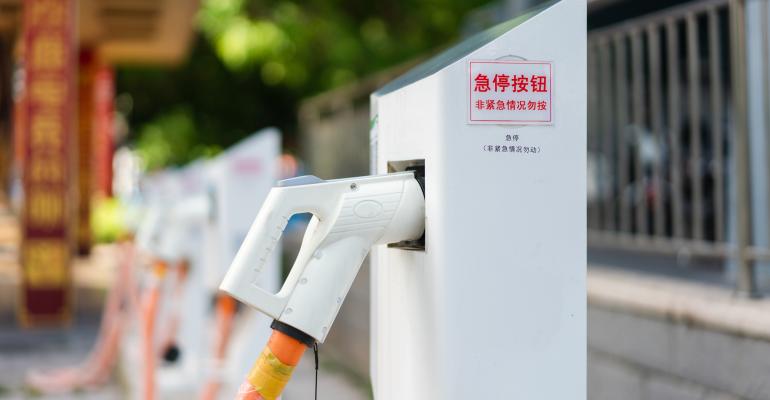 China will beat its EV target two years ahead of schedule despite economic dips from COVID-19.

ANN ARBOR, MI – China will reach and surpass its goal of New Energy Vehicles (NEVs) making up 20% of all new-vehicle sales by 2025, two years ahead of schedule.

That’s thanks to government incentives that have persisted through this year’s COVID-19 lockdowns, as well as enthusiasm for the zero-emission vehicles by Chinese consumers wanting to tackle the country’s air pollution any way they can.

Indeed, experts predict that NEV sales in China will jump to between 5 million and 6 million cars this year, taking 25%-30% of the domestic auto market.. Analysts of China’s market discussed the trends at the 15th annual Automotive Futures' Inside China Automotive Conference here.

Air quality in China has been the motivating factor,­ for both the government and consumers, for the surge in NEV sales. Long before COVID-19, it became common in China to see citizens wearing masks outdoors to filter airborne particulates, as well as protect against viruses.

Air quality remains a top public health issue. It is so bad that Beijing has at times campaigned against public spitting, a nuisance issue stemming from people in public expectorating the air pollution caught in their lungs and throats. Too, the country sometimes sends planes aloft over Beijing and other cities to release stimulants into clouds that can make it rain to alleviate poor air quality. Leave a car parked in Beijing for a few hours, and on many a day there will be a layer of soot on the car.

Chinese President Xi Jinping’s NEV target looked in question earlier this year when all auto sales in China dipped in the spring as a result of multiple lockdowns to cope with COVID-19 surges. But those pauses in sales have not deterred Chinese buyers from buying electric when the lockdowns lifted. With state incentives remaining steady and new companies emerging on the scene to increase competition and hold prices down, Chinese car buyers are handily beating the rest of the world in battery-electric-vehicle sales.

“There is no question that the government is very focused on being a leader in electric vehicles globally,” says Scott Kennedy, senior adviser and trustee chair in Chinese Business and Economics at the Center for Strategic and International Studies. And the country is playing to its strength as it controls 60% of the world's capacity for processing raw lithium products into battery-grade chemicals, Kennedy says.

China has set a goal of NEVs comprising 40% of the vehicles sold in the country by 2030. By 2025, the government aims to have in place charging infrastructure to meet the needs of more than 20 million cars. China has installed about 4 million charging units so far, double the number reported by the government a year ago. And the rate of increase is expected to climb faster in the next two years.

Eight years ago, when Xi stated his target for NEV sales, while increasing electricity derived from cleaner renewable energy, he said the development of the NEV market would be the only way his country could transform “from a big automobile country to an automobile power.”

Additionally, he has made pledges to his country to work on cleaning up the air. A series of emission targets has been established, which largely follow European Union standards. China in 2020 established “China 6,” for example, which puts China at the top of the list of countries with the most challenging and stringent vehicle emissions standards.

The toughening standards impact both passenger vehicles and heavy-duty commercial vehicles. If accomplished, thousands of tons of toxic pollutants such as particulate matter and oxides of nitrogen will be taken out of China’s air each year.

Chronic Obstructive Pulmonary Disease (COPD) is felt widely in China, with smoking and air pollution the major causes of the disease. Additionally, the economic burden of the disease is high.

China also is looking to reduce its dependence on coal to fire its power plants but winding down coal takes much longer to accomplish than getting consumers to opt for BEVs. While the country’s use of coal to fire its power plants stands at about 65% (compared with less than 25% in the U.S.), electricity generated from renewable sources increased from 17.6% of the total in 2008 to 27.3% in 2020, according to numbers furnished by the Chinese government. Progress is slow but is being made.

NEV policy support has spiked from $245 billion spent by the government between 2009 and 2017 to $80 billion in 2021 alone, as well as $105 billion in suspended sales tax for new NEV vehicles certified by the government for the exemption. The government is expected to extend that incentive through 2023 to accelerate NEV penetration even further.

Sales incentives are just one factor. Analysts point to genuine interest in EVs on the part of the Chinese car-buying public as a means of doing something within their control to improve air quality and thus quality of life.

“Additionally, there is a great trend of consumer nationalism happening in China,” says Professor Ye Wu, associate dean of Tsinghua University in Beijing, which is going to make it tougher for Western automakers to capitalize on the NEV surge.

As economic prosperity flows to more households in China, the automotive car-parc is seeing the effect. China’s total vehicle stock has boomed since 2000, topping 300 million in 2021. That’s a 15% annual growth rate. It is now the world’s leading market for new vehicles.

China is not just relying on new BEVs, or its focus on increasing renewables for achieving cleaner air. As part of the China 6 measures, the country also is requiring that gasoline-powered internal-combustion-engine vehicles limit particulate air pollution as well. This has led to wider adoption of gasoline particulate filters (GPFs).

Hybrids, too, seen as low-emission vehicles, are getting GPFs as their frequent stop/start cycles spew particulates with every engine start. And standards will get tougher when China’s “6a” is replaced by “6b” in July 2023 with emissions limits lower than European equivalents.

China’s overall policy goals around zero-emission mobility and renewable energy are touted domestically as “Beautiful China” by 2035, and carbon neutrality by 2060.