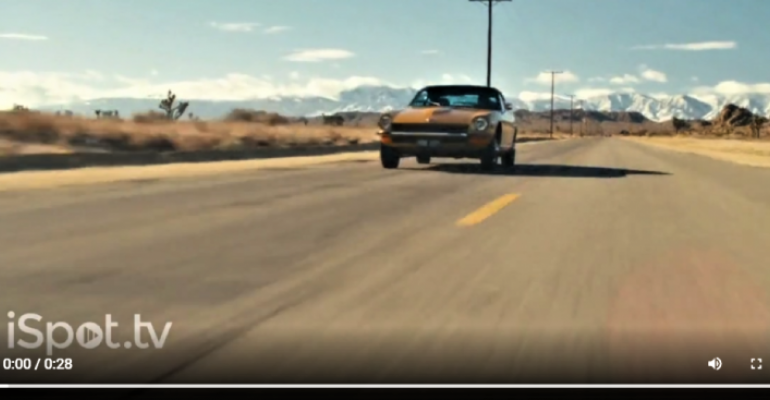 Ace Metrix Creative Assessment data from iSpot shows that over the past 90 days, the Nissan spot was deemed 4.9% more watchable by survey respondents than the norm for automotive ads, perhaps explaining why the automaker has stuck with it.

Nissan continues its reign at the top of iSpot.tv’s ranking of the most-viewed automotive commercials – the ads that have generated the highest number of impressions across national broadcast and cable TV airings.

Claiming the No.1 spot for the week of May 24 and for the fifth time in the past six weeks, is

Nissan’s Brie Larson campaign detailing the type of car people deserve (spoiler: not a dull one). Ace Metrix Creative Assessment data from iSpot shows that over the past 90 days, the spot was deemed 4.9% more watchable by survey respondents than the norm for automotive ads, perhaps explaining why Nissan’s stuck with it.

Another potential reason? The brand was recognized by 97% of respondents (meaning they remembered it was a Nissan ad after watching it).

Subaru continued to revisit long-running creative last week, giving plenty of play to its dog-focused Forester spot, and it’s easy to see why. According to Ace Metrix data, the ad had 23.8% higher attention than the norm for auto ads in the past 90 days and was 29.8% more likeable. The characters (all dogs) were dubbed the single best thing about the spot by 44% of survey respondents, and “cute” was the top reaction.

Kia’s third-place ad for the new Carnival minivan emphasizes versatility, along with key features such as increased towing capacity and blindspot monitoring. iSpot data shows nearly 44% of the spot’s TV ad impressions from last week came during NBA Playoff games alone, and over 60% came from sports-related shows. The visual scenes (including a dynamic desert environment) were seen as the single best thing about the ad by 33% of survey respondents.

Along with the aforementioned Forester ad, Subaru also continued airing its wedding-themed 2021 Crosstrek spot. Ace Metrix data shows the spot was 5.9% more likeable than the norm for automotive ads in the past 90 days and earned 3.4% higher attention. Subaru opted for a significant emphasis on primetime impressions for the ad, with about 43% coming during that time period, per iSpot.

Honda’s outdoor-focused spot for its SUV lineup scored well in terms of brand recognition (84% of survey respondents identified Honda, per Ace Metrix), and was 4.2% more likeable than the norm for automotive brands across the past 90 days. One survey respondent noted: “I liked the ad and it looks fun. I did not know Honda was so rugged” – a good sign for an ad that actively attempted to get the point across about vehicle durability.

5. Honda: Rise to the Challenge