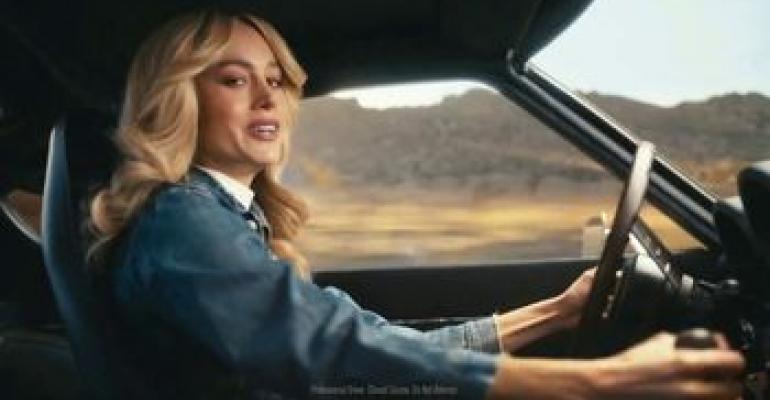 The Nissan spot prescribing exactly the sort of car people deserve was No.1 for the week of May 31, holding the top spot for a third straight week and six of the past seven.

Nissan and actress Brie Larson maintain their dominance of iSpot.tv’s ranking of the most-viewed automotive commercials – the ads that have generated the highest number of impressions across national broadcast and cable TV airings.

The Nissan spot prescribing exactly the sort of car people deserve was No.1 for the week of May 31, holding the top spot for a third straight week and six of the past seven. Ace Metrix Creative Assessment data from iSpot shows that since May 1, the commercial was deemed 12.1% more effective by survey respondents than the norm for automotive ads.

The spot’s been everywhere since its debut in April, but last week it got a fresh boost of TV ad impressions from shows including SportsCenter and Law & Order: Special Victims Unit.

At No.2, Toyota’s positivity-themed ad earned 3.6% higher attention than the norm for auto ads since May 1, per Ace Metrix. Nearly 11% of TV ad impressions for the spot came from NBA Playoffs airings across both ABC and ESPN. Ace Metrix data shows 18% of survey respondents found the encouraging message to be the single best thing about the ad.

Subaru shows up twice among the top five commercials for May 31-June 6. The first is a safety-focused ad for the Outback, which, according to Ace Metrix data, earned 16.9% higher attention than the norm for auto ads since May 1 – and was 7.4% more likeable. According to 27% of survey respondents, the single best thing about the ad is the message (about Outback’s safety features and how they protect the people most important to customers).

The second Subaru spot is focused on the brand’s pet adoption events and its related donations. Over 20.3% of TV ad impressions for the ad came during movies, according to iSpot, while 19.9% were during reality TV programming and another 13.2% were during drama and action shows.

Cadillac’s Lyriq ad returns to the top five most-seen automotive ad rankings with its informative creative on the electric vehicle. Ace Metrix data shows the commercial conveyed information 12.9% better than the norm for auto brands and garnered 3.4% more attention. Said one survey respondent: “The car is beautiful and sells itself by the way it looks.”