Planning for the new Grand Cherokee assembly plant began in 2019, when a $1.6 billion investment was announced for a retooled generally assembly hall and body shop, as well as an all-new five-story paint shop.

A treasured piece of Detroit’s automotive history has a new lease on life, as the Mack Avenue plant owned by Stellantis starts shipping this month the first salable units of the fifth-generation 2021 Jeep Grand Cherokee.

Customer orders are being accepted for the long-wheelbase three-row Grand Cherokee, which will be followed by a two-row version and plug-in hybrid variant.

All three vehicles will come from the plant now named Detroit Assembly Complex – Mack, which is adjacent to Jefferson North, the assembly home for the previous-generation Grand Cherokee.

The Mack Avenue location on Detroit’s east side began as Michigan Stamping Co. in 1916, then was purchased by Briggs Manufacturing in 1920. Briggs was one of Detroit’s largest coachbuilders back then and the Mack site was one of 10 Detroit locations where Briggs made bodies for Ford, Chrysler, Packard, Oldsmobile and others.

Chrysler purchased the Mack location and all other U.S. body building operations from Briggs in 1953, a year after founder Walter Briggs died, and Chrysler – in its various iterations over the years – has held the property ever since.

After extensive cleanup at the site, a “New Mack” plant was built to produce the Dodge Viper from 1991 to 1995, before the two-seat muscle car moved a few miles away to Conner Avenue Assembly Plant.

Planning for the new Grand Cherokee assembly plant began in 2019, when a $1.6 billion investment was announced for a refurbished and retooled generally assembly hall and body shop, as well as an all-new five-story paint shop with 124 robots.

Nearly 3,900 employees – most of them new hires – work at the plant on three shifts, and more than half are Detroit residents. It takes 36 hours to produce the new Grand Cherokee L. Plans call for the two-row Grand Cherokee and PHEV to be assembled on the same line as the long-wheelbase model.

Most of the plant’s component suppliers are located within 10 miles (16 km) of the Mack site, which will receive 770 inbound trucks daily and send out finished vehicles on 95 railcars daily. 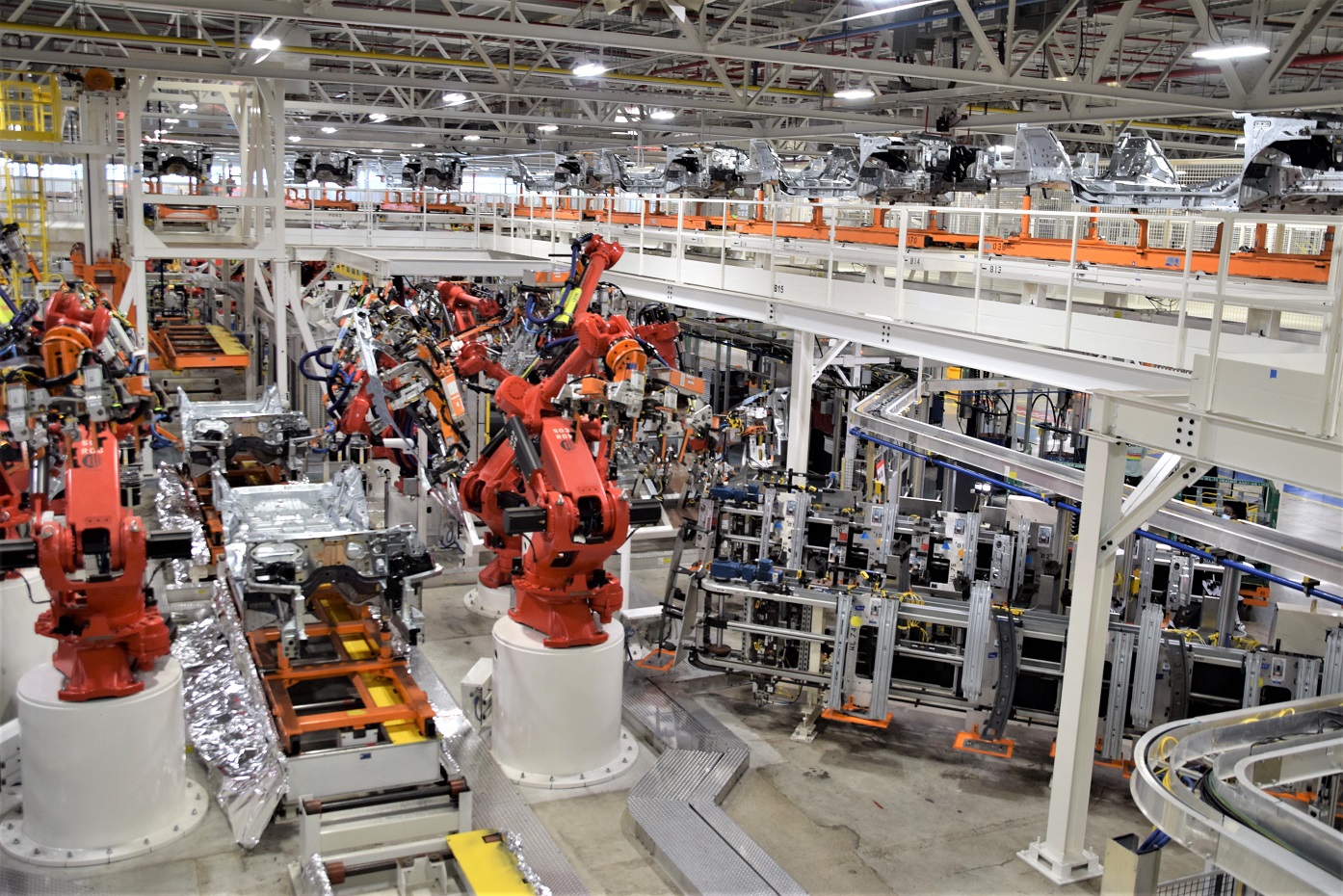 Bodies move along overhead conveyor (upper right) before rotating and lowering so robots can weld on body structure and roof (lower left).