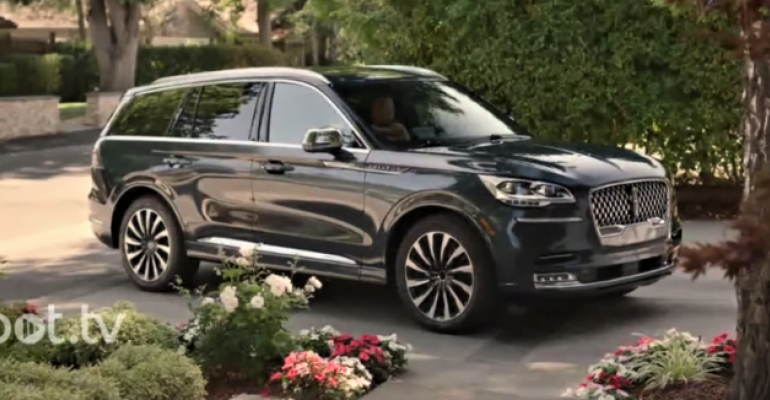 Lincoln’s “Where Does the Stress Go?” spot continues to dominate with the most impressions, backed by the highest estimated national spend, which increased to $5.4 million.

Lincoln remains No.1 in iSpot.tv’s weekly ranking of the most-viewed automotive commercials – the ads that have generated the highest number of impressions across national broadcast and cable TV airings.

Three new ads make their debut on the list for the week of Oct. 4, with Nissan, BMW and Cadillac all adding fresh creative.

But Lincoln’s “Where Does the Stress Go?” spot continues to dominate with the most impressions, backed by the highest estimated national spend, which increased to $5.4 million. That’s more than twice that of any other ad on the list, and half of that total was dedicated to NFL programming.

Debuting at No.2 is Nissan’s “Hollywood Story.” Major League Baseball delivered the most impressions for this ad, which features actress Brie Larson making another appearance as the company spokesperson backed by the Guns N’ Roses hit “Welcome to the Jungle.” According to iSpot’s Ace Metrix survey data, viewers find the spot 6.3% more likable than the industry norm. “I like that it had a woman driving. I don’t think I’ve ever seen a woman driving in a car ad,” said one respondent.

Subaru’s “Go Further” rises a notch to third, driven by a near-doubling of its estimated national spend, which – unlike the other ads – didn’t target sports programming. Rather, the strategy focused more on primetime network series, led by The Voice, Chicago Fire and Survivor. In terms of likeability, the spot gives the Nissan ad a run for its money, scoring 9.6% above the industry norm, as well as 6.1% above the norm for watchability.

Cadillac rounds out the list with “AKG,” featuring Regina King touting the new Lyriq BEV. While college football delivered the most impressions, The Today Show placed a strong second with a fraction of the estimated national spend. Viewers found the ad 7.3% more likeable than the industry norm, and rated it 7.1% higher for desirability, according to Ace Metrix.