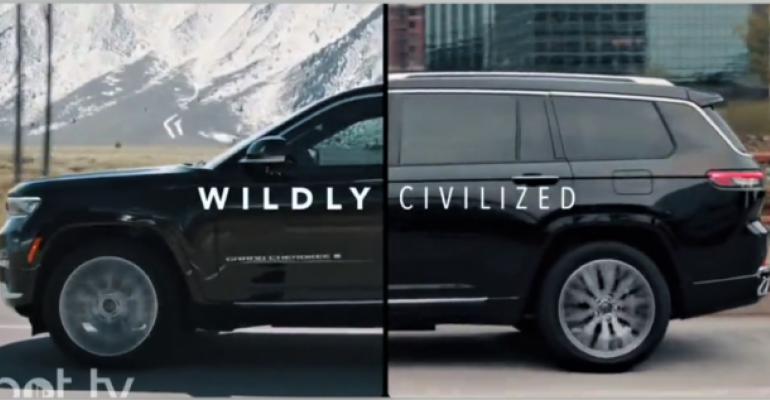 The No.1 ad for the week of July 12, entitled “Wildly Civilized,” promotes the Jeep Grand Cherokee midsize SUV.

For the third week in a row, Jeep retains the pole position among iSpot.tv’s ranking of the most-watched automotive commercials – the ads that have generated the highest number of impressions across national broadcast and cable TV airings.

The No.1 ad for the week of July 12, entitled “Wildly Civilized,” promotes the Jeep Grand Cherokee midsize SUV. The ad also leads the pack in estimated TV spend, at $2.5 million. According to Ace Metrix Creative Assessment survey data from iSpot, the commercial’s creative elements elevated viewer attention to 6.2% above the norm for auto ads in the last 90 days, and proved 6.4% more likeable.

Following as a close second (assisted by an estimated $2.3 million spend on the week) is a new ad from Nissan to support its Pathfinder SUV. With a run-time of 15 seconds, the spot gets right to the point backed by the guitar riff from “Salute Your Solution” by Jack White’s The Raconteurs. The product itself was named the single best thing about the ad by 23% of Ace Metrix survey respondents.

Toyota’s dust-donut competition among its fleet of pickups spins into third place. Featuring a mix of male and female drivers, the spot lifted attention 0.3% above the norm for automotive ads in the past 90 days, according to Ace Metrix. Survey respondents found the visual scenes to be the single best thing, with “exciting” rated as the top emotion around the commercial.

Lincoln remains in fourth with its ocean-themed ad for the Nautilus CUV. The brand spent a nearly equal amount airing the spot on both Fox News and HGTV, but Fox News delivered the goods on TV ad impressions with nearly 30% of the total versus 13.5% from HGTV.

Ram’s summer clearance spot, in fifth place, garnered 4.1% more attention than the norm for automotive ads in the past 90 days, while proving 6.3% more likeable as well. Ace Metrix survey respondents found the ad to be cinematic and nostalgic.

4. Lincoln Motor Company: Summer Is a State of Mind