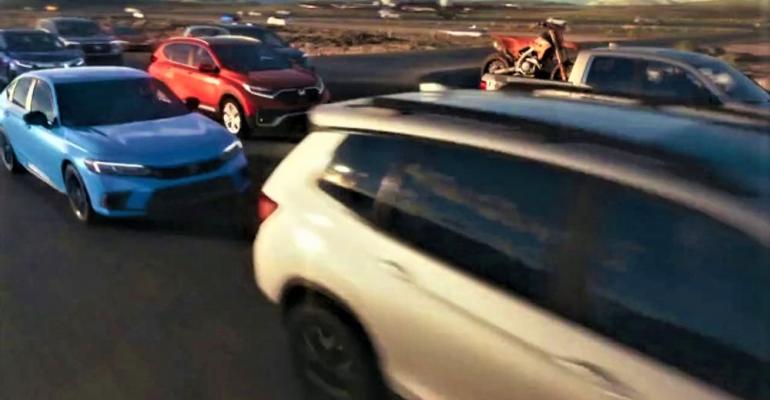 As has been the case during this NFL season, the vast bulk of Honda’s impressions and budget centered on the sport. The ad drew the most impressions – 70 million – from NFL programming.

Honda’s “The Origin of Determination” spot reclaims the No.1 position in iSpot.tv’s ranking of the most-viewed automotive commercials – the ads that have generated the most impressions across national broadcast and cable TV airings.

The commercial’s 215 million-plus impressions during the week of Nov. 8 were made possible by an estimated spend of over $5 million, making Honda the week’s highest spender on auto ads as well.

As has been the case during this NFL season, the vast bulk of Honda’s impressions and budget centered on the sport. The ad drew the most impressions – 70 million – from NFL programming, and the estimated $3.6 million Honda spent on placing it in football broadcasts was also the highest in the list.

Ranking second is Nissan’s “From Dealer To Driveway.” While falling just short of the lead in impressions (only 5 million fewer than Honda), it won the week as the fan favorite with the highest overall score in terms of iSpot’s Ace Metrix survey data. Viewers ranked the ad particularly high in the “desire” category, at 4% higher than industry norms.

Among the other ads on this week’s list, two stand out for different reasons. Ram Trucks’ “The Nice List” is notable for having the second-highest estimated national spend of $4.7 million, also led by $3.25 million on NFL games, but followed closely by another $800,000 on college football.

Meanwhile Jeep’s fifth-place “American Flag” ad gave Nissan a run for its money in the fan-reaction category according to Ace Metrix data, taking the top scores in the categories of “attention,” “likeability” and “watchability.” The ad’s patriotic message stood out far and above that of other automotive ads, with 20% of viewers rating it the “single best thing” about the spot – a response 75% better than most car ad messages receive.