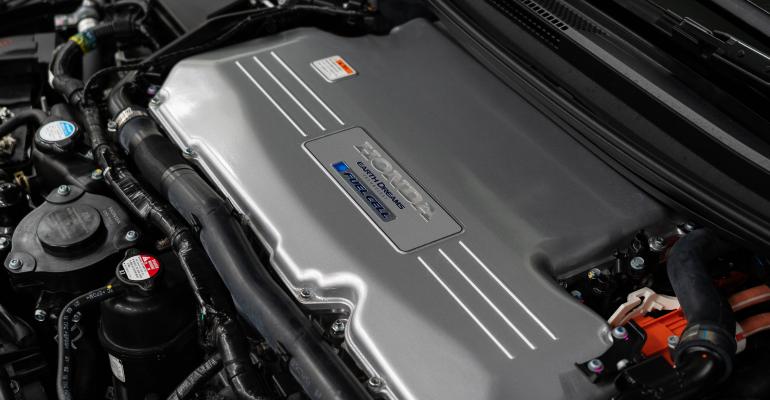 Honda says it will launch a plug-in fuel-cell-electric-vehicle (FCEV) version of the newly redesigned CR-V in 2024.

Anticipating a small-volume beginning, Honda will manufacture the FCEV in Ohio at its Performance Manufacturing Center where it has built limited-volume performance vehicles such as the Acura NSX.

The CR-V-based FCEV marks North America’s first production vehicle to combine a plug-in feature with FCEV technology in one model, which enables the driver to charge the onboard battery to deliver EV driving around town with the flexibility of fast hydrogen refueling for longer trips.

Honda says it will provide more technical details on the vehicle closer to introduction. But it’s worth looking at competitor Stellantis for clues, as the French-American automaker’s Opel unit introduced a similar approach in 2021.

Opel has a plug-in fuel-cell commercial van, Opel Vivaro-e HYDROGEN, with 250 miles (400 km) of range. That vehicle, like Honda’s, uses compressed hydrogen, the tanks of which can be refilled in a few minutes, as well as a battery that can be recharged to provide power for 30 miles (50 km) of driving.

The Opel Vivaro-e with its 45-kW fuel cell is capable of generating enough power for continuous highway driving, while the 10.5-kWh lithium-ion battery located under the front seats provides dynamic peak power when required ­– for example, at start-up and under acceleration. Since the battery covers power needs in such situations, the fuel cell can run at optimum operating conditions. The battery also enables regenerative braking, while the plug-in capability offers the opportunity to recharge the battery externally if necessary – for example, at a charging station, providing 30 miles of pure battery-electric range if the hydrogen is depleted.

The practicality of the vehicle depends on infrastructure that has not only hydrogen refueling stations, but fast-charging EV stations as well.

While that infrastructure scenario may sound like a California-only market, the U.S. government is investing billions in building out fast-chargers and hydrogen hubs in multiple states to support the expansion of EVs and the ramp-up of both fuel-cell heavy trucks and stationary fuel-cell generators. Those investments, not subject to changing politics in Washington as the investment is part of the Inflation Reduction Act passed in August, has automakers and suppliers stepping up hydrogen fuel-cell investments.

“The Inflation Reduction Act is the ‘magic wand’ we have been waiting for (to rapidly advance EV adoption), says Leilani Gonzalez, policy director at the Zero Emission Transportation Assn.

Honda has established a target to sell only zero-emission vehicles by 2040 and to be carbon-neutral by 2050. “As we accelerate our plan to produce Honda battery EVs in the United States, we also will begin low-volume production of fuel-cell electric vehicles there to further explore their great potential as part of a sustainable transportation future,” says Gary Robinson, vice president of Auto Planning & Strategy for American Honda Motor Co.

Most, but not all, automakers are ramping up a fuel-cell strategy to go along with an EV strategy. The two are entirely compatible as EVs generally are being designed to accommodate either battery packs or hydrogen tanks without changes to the vehicle architectures. Thus, more small-scale fuel-cell plug-in hybrids are likely on the way with an eye toward taking advantage of the wider availability of hydrogen as hydrogen hubs are built.

There is a big policy initiative at the federal level, as well as in California, to convert diesel trucks to hydrogen power over the next 15 years to substantially reduce reliance on diesel fuel for heavy trucks, stationary generators and marine applications.

Eventually, passenger cars can benefit from the infrastructure building out to support those applications.