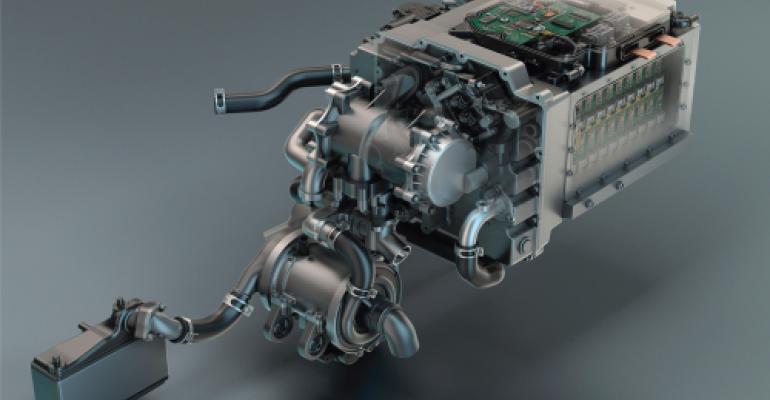 GM and Nel ASA team to scale up green hydrogen production for a projected coming expansion of a hydrogen economy.

DETROIT, MI - General Motors is joining with Hydrogen US, a Nel ASA subsidiary, to advance the industrialization of Nel’s PEM electrolyzer platform.

Nel has an excellent reputation and track record for hydrogen technology. It was, for example, the first company to establish an automated alkaline electrolyzer production line. The joint-venture with GM is meant to produce Nel’s proton exchange membrane electrolyzer on a larger scale.

“Nel has some of the most promising electrolyzer technology to help develop clean hydrogen infrastructure, and we believe our HYDROTEC fuel cell IP can help them get closer to scale.”

The timing is not coincidental. The U.S. government, in the Inflation Reduction Act signed into law in August, allocates $8 billion to establish hydrogen hubs in strategic locations across the country. The aim of this provision is to speed the conversion of the heavy truck fleet operating in North America from diesel to hydrogen power, as well as the advancement of stationery hydrogen power for commercial buildings and housing developments.

According to the Department of Energy website, eligible projects include those that “demonstrate the production, processing, delivery, storage and end-use of clean hydrogen.”

The two companies are chasing government support for that goal. A coalition of seven Midwest states (IL, IN, KY, MI, MN, OH, and WI), dubbed the Midwest Hydrogen Coalition (M-H2), announced an intention to get a share of the funding to advance four hydrogen hubs that would reside somewhere within the group’s states. New Mexico has teamed with Colorado, Utah and Wyoming for a similar coalition effort.

Most of the hydrogen produced today is byproduct of fossil-fuel production, chiefly natural gas. Electricity – from the grid or from renewable sources such as wind, solar, geothermal or biomass – is also used to produce hydrogen, but not at a scale that is desirable.

Hydrogen demand sits at an estimated 10 million tons per year in the U.S., with about 55% used in oil and gas refining processes and another 35% used in ammonia and methanol production. Ammonia and methanol plants are a logical first wave of conversion to green hydrogen generated from wind, solar and geo-thermal sources.

“Expanded use of hydrogen energy is undoubtedly going to come in part from fossil-fuel powered electricity, but the goal has to be to ‘green’ as much electricity as possible from renewables…otherwise we may just as well burn the fossil fuels to power electricity rather than use it to produce a larger supply of hydrogen,” says Paul Eremenko, co-founder and CEO of Universal Hydrogen. The company is based in New Mexico and is developing a turbo-prop passenger plane that runs on hydrogen.

New Mexico, Utah, Wyoming and Colorado represent a seemingly ideal location for a hub. New Mexico has an average of 310 days of sunshine; Utah 226; Colorado 300; and Wyoming 208 days.

Of all the automakers, GM has been the most bullish on hydrogen, not only as a mobility fuel, but for stationery power for commercial buildings and residential housing. As far back as the 1990s, GM envisioned hydrogen-powered trucks and stationery generators that could be GM-branded.

GM is developing and commercializing both Ultium battery and HYDROTECH hydrogen fuel-cell systems technologies. The development and commercialization of these technologies is opening new potential businesses for GM as the U.S. and European hydrogen economy starts to expand into aerospace, trucking, locomotive and power generation.

The idea behind the alliance with Nel is to take GM’s fuel-cell technology and scale it up on Nel’s PEM platform to position itself as the leader in green hydrogen generation among automakers. The automaker has fuel-cell development sites in Michigan, New York, California, Washington, D.C., Hawaii and Germany.

GM views an opportunity to do for hydrogen what Tesla has done for BEVs. Tesla established an energy generation and storage business in 2015, launching a range of home batteries, which could be charged using solar power, providing a backup to the main grid. In addition, Tesla has developed a series of solar panels and full solar roofing.

There is a view that with the advancement of BEV light vehicles and hydrogen-powered heavy trucks, there will be less revenue in future coming from parts and service. Charting a future in energy generation and storage for multiple industries can more than make up for the loss of business revenues coming from internal-combustion-powered mobility.