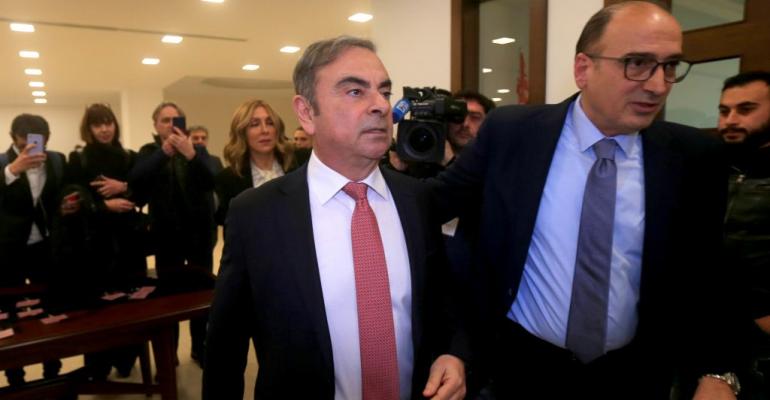 Getty Images
Carlos Ghosn (left) arrives in Beirut to address journalists on Jan. 8, 2020, after he fled Japan, where he was to face trial on charges of financial misconduct.
Industry News

Ghosn says three automakers – Toyota, Volkswagen and the Renault-Nissan-Mitsubishi Alliance – were poised on the starting block for industry leadership. “We now have only two, and I don't think the Alliance is going to make it again (to the top level), particularly with the kind of mindset and leadership they have.”

First installment of a three-part series from our Carlos Ghosn interview.

Carlos Ghosn’s legacy at Nissan will forever be mired in controversy because of the way it ended: Beginning with his being pulled from his plane and arrested upon arriving in Tokyo in November 2018, to his daring year-end escape the following year when he determined he couldn’t get a fair trial in Japan and probably would spend most of the rest of his life in a Japanese prison.

We probably will never know the whole truth about his arrest and why a small faction inside the automaker turned to the Tokyo prosecutor’s office to resolve essentially a boardroom dispute over Ghosn’s compensation – or what happened during his 130 days of incarceration at the notorious Tokyo Detention House where he was subjected to extended interrogations without his lawyer present and without being informed of the charges, both violations of Japanese law.

The prosecutors intended to break him, to get him to confess to a series of alleged financial crimes. But the authorities did not treat all Nissan board members equally, targeting two foreigners and no Japanese: Ghosn and American Greg Kelly, a Ghosn ally currently standing trial in Japan for allegedly being Ghosn’s accomplice. There always will be questions about the ultimate judgment had he remained in Japan to be tried.

Ghosn, a French, Brazilian and Lebanese national who came to Japan in 1999 to restructure and revive Nissan, has maintained his innocence from the outset. Newly disclosed documents from the Kelly trial, which Nissan and the prosecutors have had in their possession since the day of Ghosn’s arrest when Nissan lawyers raided Ghosn’s office in Beirut and took his computer, support his claims.

“There were proposals,” he tells Wards. “This was a package for after retirement that was not decided and not defined. It would have gone to the board after my retirement and be proposed by the representative directors to keep (me) totally tied to the company to use (my) concerns for the long term and prevent (me) from working for other organizations. There was lots of brainstorming. But nothing was done in the end.”

According to the original charging documents, the package reportedly totaled ¥9.3 billion, which, based on average annual exchange rates, comes to $94 million. It is a lot of money until one considers it was compensation Ghosn had agreed to forfeit in 2010 when he took a pay cut to help Nissan rebound from the business downturn and hyper-strong yen that followed the 2008 bankruptcy of Lehman Brothers Holdings.

Yes, he was partly motivated by new disclosure guidelines regarding executive compensation and groused about being underpaid, but he says the Japanese public “wouldn’t understand” his ¥1.8 billion salary package ($16.4 million at the current exchange).

“I thought the Japanese public wouldn’t understand my compensation,” he explains, “and internally I needed everybody to be motivated and aligned on our recovery. So, I decided voluntarily and without pressure to reduce my compensation. And then let’s see what happens.”

While a small faction in Nissan’s management group enlisted prosecutors to help them remove Ghosn over a future ¥9.3 billion payday, they also succeeded in triggering a nearly $8 billion loss in market capitalization, the slide beginning the day after his arrest.

But Ghosn, now 68 and living in Lebanon, which has no extradition treaty with Japan, believes the biggest loss is being borne by the “Alliance” of Nissan, Renault and Mitsubishi that form one of the world’s largest automotive groups. 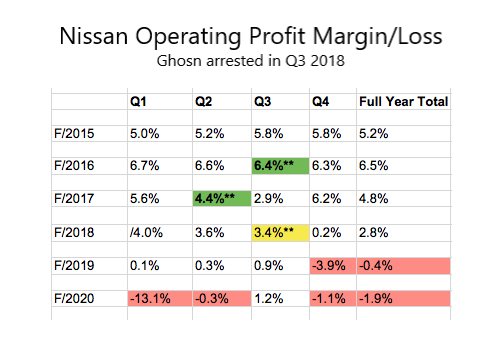 “The responsibility of this group of people inside Nissan (who engineered a boardroom coup), the prosecutor of Tokyo and the government of Japan for the demise of Nissan is huge. And it is not only Nissan,” he says. “Look at Mitsubishi. Mitsubishi was in the middle of a recovery in 2017 and 2018. Look what happened to them in 2020. And look at what happened to Renault.”

Ghosn contrasts the Alliance’s finances with those of Toyota and Volkswagen Group, which respectively reported profits of ¥2.2 trillion ($20.5 billion) and €10.6 billion ($12.9 billion). Toyota’s operating profit margin stood at a respectable 8%. Volkswagen’s, although down from 2019, was 4.8%.

The future of Nissan and the Alliance?

“Three years ago,” Ghosn says, “we had three companies on the starting block for industry leadership. We had Toyota, Volkswagen and the Alliance. We now have only two, and I don't think the Alliance is going to make it again (to the top level), particularly with the kind of mindset and leadership they have.

“Obviously people inside the Alliance talk to me. I know what’s going on. They tell me what’s not happening that used to happen, that there is no more vision, there is no vision on technology and products, that they’re focused on the short term.”

When Ghosn arrived at Nissan in June 1999, first as chief operating officer, then 12 months later CEO, Nissan was on track to report a ¥684 billion ($6.3 billion) loss that year. The Japanese fiscal year begins in April.

Five years later, Nissan was on track to realizing the largest profit in its then-71-year history, ¥512 billion ($4.7 billion), on record sales. It would do even better in fiscal 2005. And its debt had been cut to almost zero.

Similarly, when Ghosn turned management over to Hiroto Saikawa in October 2016 – Saikawa initially sharing CEO duties, then becoming the sole CEO the following April as Ghosn assumed the positions of chairman of Nissan and Mitsubishi – Nissan was reporting 6% operating profit margins, not as high as the pre-“Lehman shock” period, but solid.

Margins steadily declined over the subsequent 24 months, from October 2016, and in the first business quarter after Ghosn’s arrest, January-March 2019, crashed to 0.2%.

“Nissan is effectively back where it was when Carlos Ghosn arrived in 1999 to restructure and revitalize the organization,” says Koji Endo, veteran auto analyst at SBI Securities. 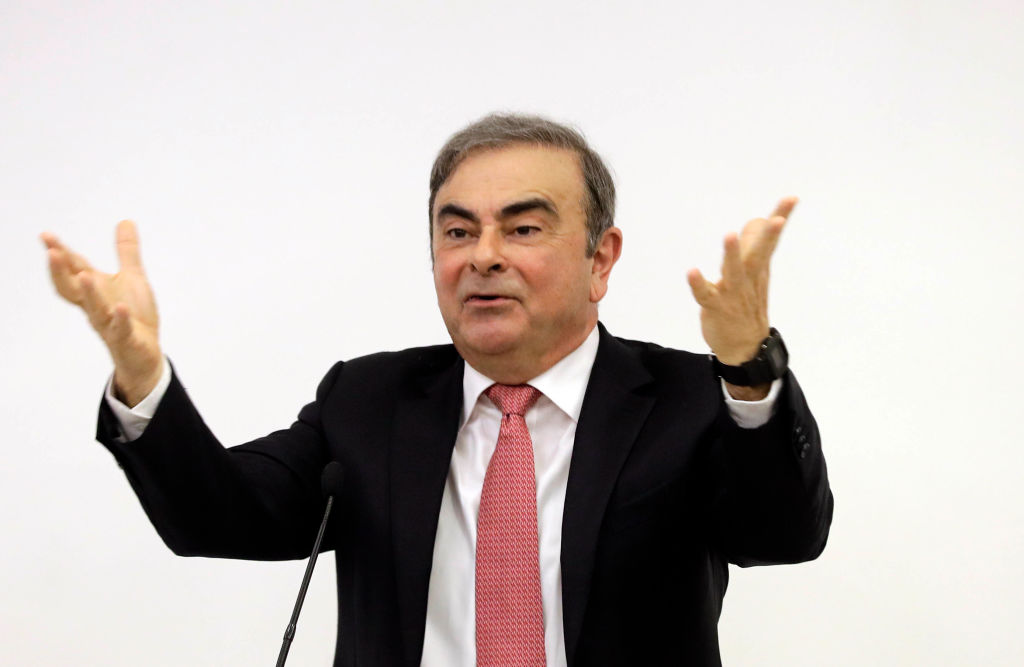 In fact, Nissan is planning to lay off more than 10% of its global work force, reduce production capacity and shrink its model lineup 20%, and shutter at least two plants, in Spain and Indonesia. Its combined net losses over the past two years are a staggering ¥1.1 trillion ($10.1 billion). And as a brand, it has fallen out of the top 10 in global battery-electric vehicle sales.

The main difference between 1999 and today, according to one observer, is that the automaker doesn’t have Carlos Ghosn to lead the restructuring.

Does Ghosn think at some point people will look at the big picture of his accomplishments and history eventually will look kindly upon him?

“Look at the results,” he says. “We're businesspeople. How can you say that I was not a good leader after you have looked at 18 years of results at Nissan? And how can you say that the guys (currently) running the company are doing it well when you look at the results for the last two to three years? It’s a disaster, not only in Nissan, but also Renault and Mitsubishi.”

Nissan declined to be interviewed for this report.