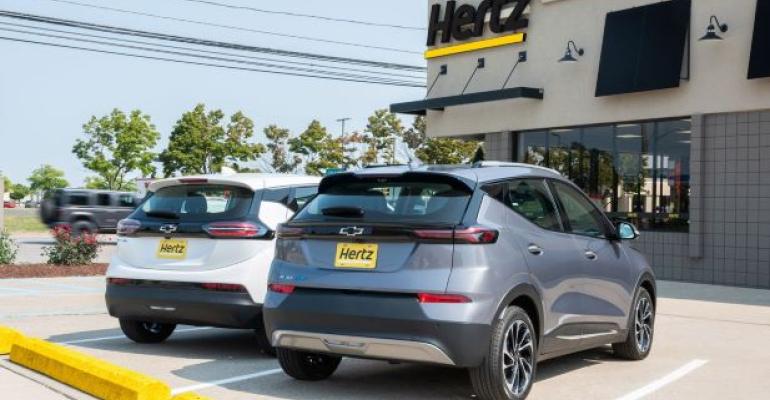 The Hertz contracts represent the largest purchase of BEVs by a fleet customer to date, according to a joint announcement by the companies.

General Motors’ plans for putting more drivers in battery-electric vehicles get a boost as rental-car giant Hertz says it plans to order up to 175,000 Chevrolet, Buick, GMC, Cadillac and BrightDrop BEVs over the next five years.

The Hertz contracts represent the largest purchase of BEVs by a fleet customer to date, according to a joint announcement by the companies.

It also is the broadest deal of its kind, they say, spanning a range of vehicle categories and price points – from compact and midsize SUVs to pickups, luxury vehicles and more.

“Our work with Hertz is a huge step forward for emissions reduction and EV adoption that will help create thousands of new EV customers for GM,” Barra says. “With the vehicle choice, technology and driving range we’re delivering, I’m confident that each rental experience will further increase purchase consideration for our products and drive growth for our company.”

Over the term of the contracts, Hertz estimates its customers could travel more than 8 billion miles (12.9 billion km) in the BEVs it is buying from GM, saving 3.5 million metric tons of carbon-dioxide-equivalent emissions compared to similar gasoline-powered vehicles traveling such a distance.

“It’s exciting that two iconic American companies that have shaped the evolution of transportation for more than a century are coming together to redefine the future of mobility in the 21st century,” Hertz CEO Stephen Scherr says.

“We are thrilled to partner with GM on this initiative, which will dramatically expand our EV offerings to Hertz customers, including leisure and business travelers, rideshare drivers and corporates,” he says.

Hertz plans to create the largest BEV rental fleet in North America, with tens of thousands of vehicles available for rent at 500 Hertz locations across 38 states. The company’s current goal is for one-quarter of its fleet to be electric by the end of 2024.

GM deliveries to Hertz will increase as the automaker rapidly expands BEV production between 2023 and 2025, driven by the opening of Ultium Cells battery-cell plants in Ohio, Tennessee and Michigan.

GM is spending $35 billion to introduce 30 BEV models by 2025. It expects vehicles such as the battery-electric Chevrolet Silverado, Chevrolet Blazer and Chevrolet Equinox to reach showrooms in 2024. The automaker’s goal is to have an all-electric-powered vehicle lineup by 2035.

GM’s plans include a $491 million investment in its Marion, IN, metal-stamping operations to prepare for production of steel and aluminum stamped parts for future products, including BEVs, built at multiple GM assembly plants. The project includes building a 6,000-sq.-ft. (557-sq.-m) addition. Construction at the Marion plant will begin later this year.