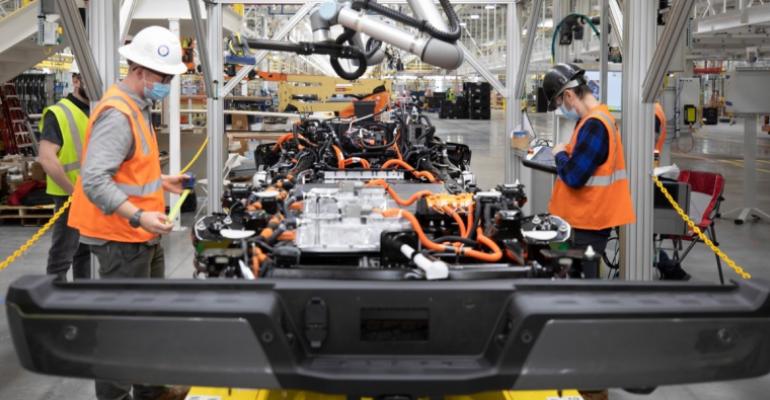 Ford Investing in EV Training for Workers at New Plants

Ford says it is setting up a pilot program in Texas, one of the largest markets for the company’s iconic pickup trucks, to train technicians to service battery-electric vehicles such the new F-150 Lightning.

As part of its multibillion-dollar investment in electric vehicles, Ford is preparing to train technicians both for dealers and for the new factories it plans to build in Tennessee and Kentucky.

Ford says it is setting up a pilot program in Texas, one of the largest markets for the company’s iconic pickup trucks, to train technicians to service battery-electric vehicles such the new F-150 Lightning.

The automaker will invest $90 million in Texas and $525 million in total across the U.S. during the next five years “to transform America’s auto technician industry” as it ramps up the company’s push toward electrification.

The money will go toward job training and career readiness initiatives for the current and next generation of technicians who will support Ford’s growing portfolio of connected electric vehicles. Electrified vehicles, including BEVs and hybrids, accounted for 7% of the company’s sales in August.

Ford and South Korea battery maker SK Innovation are investing a combined $11.4 billion in new factories in Tennessee and Kentucky. Blue Oval City outside Memphis will produce a next-generation, all-electric F-150 and as well as a separate plant for manufacturing batteries and a recycling center. In Kentucky, Ford and SK are teaming up to build two battery plants in the BlueOval/SK Battery Park.

Lisa Drake, Ford’s chief operating officer, says the three plants will have the capacity to build batteries for more than 1 million BEVs by the time they are fully operational in 2026. One-third of the F-150 pickups Ford sells will be battery-electrics by 2030, Drake (pictured, below left) predicts. 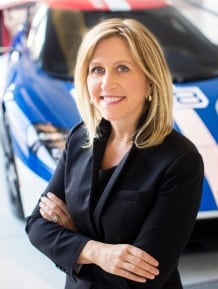 For BlueOval City the State of Tennessee is preparing to deliver control of a 6 sq.-m. (3,800-acre) site that is three times the size of the Ford’s fabled, century-old Rouge complex in Dearborn, MI.

Ford officials say job training and education is a major part of the incentive package the state is preparing to deliver to the automaker for locating Blue Oval City in West Tennessee.

As part of the package, Tennessee Gov. Bill Lee, appearing with Ford Executive Chairman Bill Ford and Ford CEO Jim Farley, says the state will build a training center on the Blue Oval site to provide the 6,000 employees Ford and SK Innovation plan to hire with the high-tech skills they will need to operate the new factories.

Tennessee, under prodding from Volkswagen, which operates a manufacturing complex at the opposite end of the state in Chattanooga, is using a German model for providing technical training, state officials acknowledge.

Volkswagen brought the German apprenticeship with it when the Chattanooga plant opened in 2010.

With the recent introduction of the ID.4 BEV, the Volkswagen Academy at the Chattanooga plant altered its training program to include new courses on EV technology – from working with high-voltage batteries to performing advanced welding work, the German automaker says.