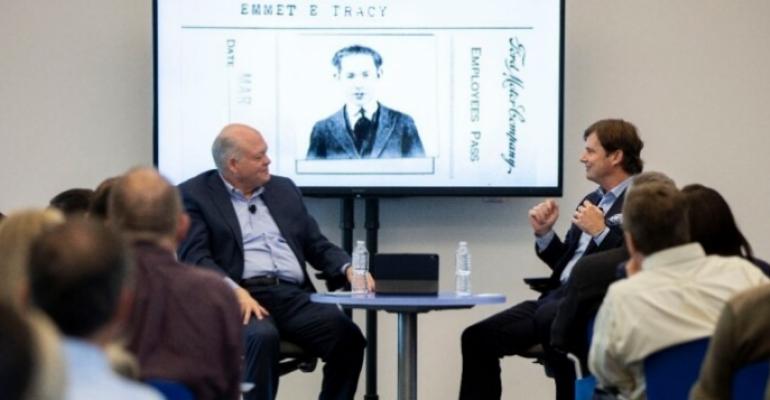 Jim Farley becomes president and CEO of Ford Motor Co. effective Oct. 1, succeeding Jim Hackett, who will retire from the company after a three-year run as president and CEO that was marked by speeding up Ford’s eventual transition to electric and autonomous vehicles, but increasing concern about a lagging stock price.

“We’re now a more curious and less insular culture, thanks to Jim Hackett,” Farley says in a hastily convened conference call on Aug. 4 that began just 20 minutes after Ford disclosed the news that Hackett, 65, would retire. Hackett will continue serving as a special advisor to Ford through March 2021.

Ford Executive Chairman Bill Ford also praises Hackett’s tenure in the call, and says he expects a smooth transition. “From where I sit, I wouldn’t expect any big surprises.” He says the topic of a search for an outside candidate for Hackett’s job came up, but the company “did not do a deep dive externally” before selecting Farley.

The 58-year-old Farley emphasizes he expects to continue pushing the growth areas he has been promoting since his latest promotion, to COO, in February.

“We are so motivated to reshape Ford,” Farley says. “I am humbled to be selected to lead Ford Motor Co.”

Farley joined Ford in 2007 as global head of Marketing and Sales and went on to lead Lincoln, Ford South America, Ford of Europe and all Ford global markets in successive roles.