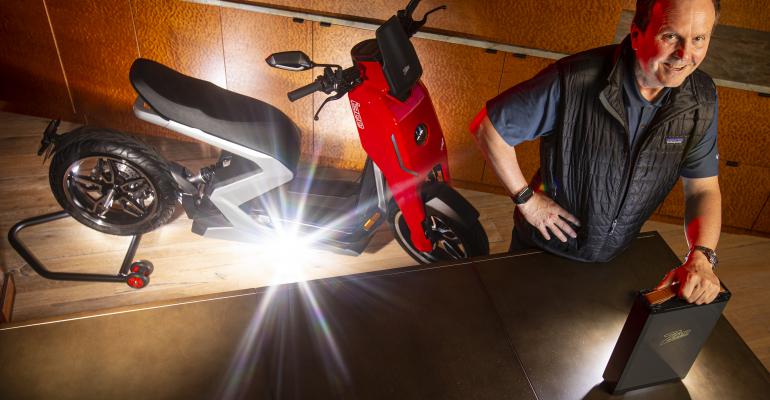 The former GM executive has a full plate advising electrification companies, the latest of which is a departure for a self-professed “4-wheel guy.”

Since retiring from General Motors in 2012, where he oversaw the launch of the Chevy Volt plug-in hybrid as vehicle line director, he spent time as CEO of Fisker Automotive and now is on the board of one of the most promising battery-electric-vehicle startups, Lucid Motors.

Posawatz also is advising a slew of other EV-related ventures such as solar-canopy firm Beam Global and charging station provider SemaConnect.

“Now I do fun stuff,” Posawatz tells WardsAuto of his many commitments during a chat on Monday in downtown Traverse City.

If that weren’t enough, he’s added yet another company to the list of those he’s affiliated with, U.K. urban-mobility company Zapp, now launching an e-bike in Paris but setting its sights on the U.S.

“As part of my many advisory gigs and assignments, I try to find out really cool new mobility solutions. I’m a 4-wheel guy, but I do think there’s some interesting other options,” Posawatz says of why he’s hooked up with Zapp.

Founded in 2017 by Swin Chatsuwan, Zapp specializes in the powered-by-2-wheels (P2W) sector, an estimated $109 billion market, and into which it’s launching a new electric scooter/motorbike, the i300 and i300 Carbon.

Slotting between last-mile scooters like Lime and Bird and step-over electric motorcycles, the i300 series is billed as having the convenience of a scooter-like form with the performance of a high-end super bike/motorcycle.

“Great pains have been taken by the team that are motorcycle zealots,” Posawatz says of the i300, which has a Z-shaped exoskeleton made of advanced alloys and aluminum creating a lightweight, but stiff and nimble structure.

Says Posawatz: “If you get eased out from a vehicle (in congested traffic) you just accelerate past it. It will be faster than most every car, particularly in a city.”

Two, 0.72-kWh lithium-ion battery packs power the i300, each slightly larger than an iPad and weighing 12 lbs. (5 kg), a tiny fraction of the half-ton 66-kWh Li-ion battery pack in the Chevy Bolt BEV.

The packs are removable and together provide about 40 miles (64 km) of range. Zapp envisions users (likely singletons, although the bike seats two provided an optional third pack is not purchased) removing the batteries and plugging them in inside their apartment or office. The packs charge on a standard 120V outlet and charge from 20% to 80% full in under an hour.

While the biggest markets for P2Ws by far are Asia and Europe, where tens of millions of similar mobility devices already are on the road, albeit internal-combustion-engine powered, there is opportunity in the U.S.

Posawatz points out 40 miles of range is enough to go from the southernmost point of Manhattan to the northernmost and then some, and it’s questionable how many urban commuters want to go back to mass transit post-COVID – not to mention deal with the traffic congestion and parking fees of an automobile.

“This is not something you’re going to use to commute from the suburbs,” he notes. “That’s not to say you couldn’t, but this is targeted much more differently. We think there’s a lot of people living and working in cities that would choose this over the alternatives of paying for parking for their car, riding buses or subways, getting an Uber or taxi, etc. – sitting in traffic forever. We think this is a really interesting solution and … many (Americans) will respond to it.”