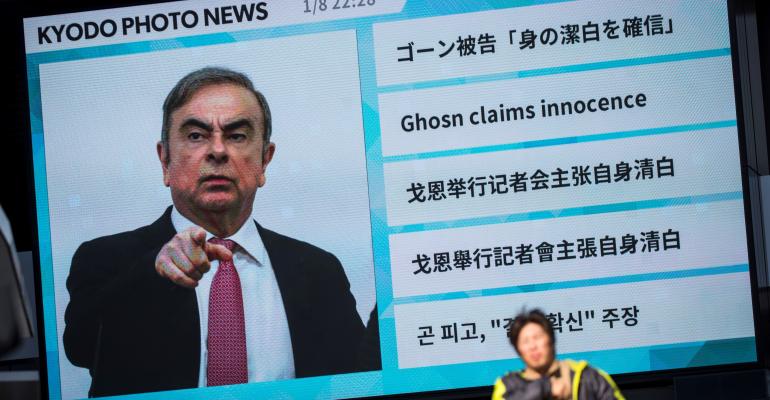 New material uncovered four years after his ouster as CEO at Nissan backs Ghosn’s claim that a post-retirement payment scheme had the support of top management and wouldn’t take effect without board approval.

The fourth anniversary of the sensational arrest of Carlos Ghosn and Greg Kelly, the former No.1 and No.3 executives at Nissan, came and went last month with almost no media attention.

Ghosn, an industry legend for his role in saving the Japanese automaker from bankruptcy 19 years earlier, then building what came to be known as the Renault-Nissan-Mitsubishi Motors Alliance into a top global player, was arrested shortly after his arrival at a Tokyo airport on Nov. 19, 2018. Thirteen months later he would make a dramatic escape to his native Lebanon, where he lives today in exile, a wanted man.

Kelly, an American who was lured back to Japan on false pretenses shortly before the Thanksgiving holiday in 2018, would spend the next three and a half years there where he stood trial and, finally, with the support of the White House and State Department, was able to leave last March. His verdict – not guilty on seven out of eight counts – is being appealed.

Ghosn’s case is more complicated because he was CEO at the time of the alleged crime of concealing eight years of future income – from March 2011, of ¥9.3 billion ($94 million). Unfortunately for him, the buck stops with the CEO.

Nevertheless, in March 2011, when Nissan’s secretariat began tracking “lost income” for Ghosn, the newly disclosed document kept secret from the public by Nissan management, shows Ghosn acted on the advice of his two most senior Japanese advisors, Toshiyuki Shiga and Itaru Koeda, not Kelly.

Shiga at the time was chief operating officer. Koeda was a former co-chairman. Both advised Ghosn there was “no legal problem” with the secretariat keeping a running tally of his income shortfall – Ghosn had taken a 50% pay cut the previous year and was trying to find a way to reclaim those lost wages. Importantly, they also told him he wouldn’t have to disclose the secretariat’s record until his retirement and only if the board hired him as an advisor and approved a post-retirement advisory contract.

Kelly wasn’t involved with these discussions. In fact, Kelly had advised Ghosn he couldn’t reclaim lost income. Initially, he turned to Nissan North America’s general counsel, Scott Becker, who wrote several legal opinions and then collaborated with Hiroto Saikawa, who would become Ghosn’s successor as CEO.

As noted above, Saikawa signed four proposals – two in 2011 and one each in 2013 and 2015, the latter two signed with Kelly, all written by lawyers, all offering Ghosn future advisory/consulting work and all including wording to prevent him from working for a competitor. There was not a single mention of the secretariat’s keeping a running tally.

GM and Ford had both offered Ghosn jobs, eliciting concerns that he might jump ship.

Although we haven’t seen the original Shiga-Koeda documents, the report by Nissan’s internal investigation headed by Murray and titled “Kali 10 Compensation Investigation Report,” confirms their existence. Buried in the findings, as noted above, are the following passages:

“Internal documents confirm that there was a discussion between Toshiaki Ohnuma (general manager of the secretariat), Shiga and Koeda in March 2011 concerning payment of the Haircut (salary shortfall) to Ghosn.

Note the words: "without disclosure."

This was a key element in the charges against Ghosn and Kelly – that they made false statements in Nissan’s annual securities reports by not disclosing, thus underreporting part of Ghosn’s future income. Except, they didn’t indict the two senior Japanese who told him it was legal.

“On March 18, 2011, Ohnuma prepared a memorandum for Shiga and Koeda to present to Ghosn based on option (c), and on March 23, 2011, Koeda instructed Ohnuma to revise the memorandum (and) proposed to pay the Haircut as an advisor or consultant fee after Ghosn's retirement…

Ghosn has always asserted that “board approval” was necessary. This document supports that contention.

So where does that leave Nissan and Renault four years after an anti-Ghosn faction inside Nissan, operating in secret from the board, removed him from management?

The automakers have seen their global market shares decline, in Nissan’s case by two percentage points. Although they are both profitable again, margins are substantially lower than they were during most of the Ghosn years and most global OEMs today.

Combined they have lost $33 billion in market capitalization. Counting Mitsubishi, which joined the Alliance in 2016, the total comes to $36 billion.

Meanwhile, the purge that followed Ghosn’s ouster, coupled with a restructuring of Nissan’s board, bringing in a majority of directors with little or no automotive experience, has left the automaker with a weak management bench.

The biggest losses: José Muñoz, who left Nissan to join Hyundai as COO, and Christian Meunier, brand CEO at Jeep.

The Alliance is unraveling in plain sight. Renault is looking for new partners, having recently signed a “framework" agreement with China's Geely to focus on conventional and hybrid cars.

The automaker needs cash to finance its battery-electric-vehicle business and have a chance to compete in its main market, Europe. Nissan no longer is considered a good fit, having fallen out of the top 15 in BEV sales.

Much of the recent reporting in Europe centers on the possibility of Renault unloading a chunk of its 42% stake in Nissan, probably taking it down to 15%.

And then, whether the Alliance will continue.