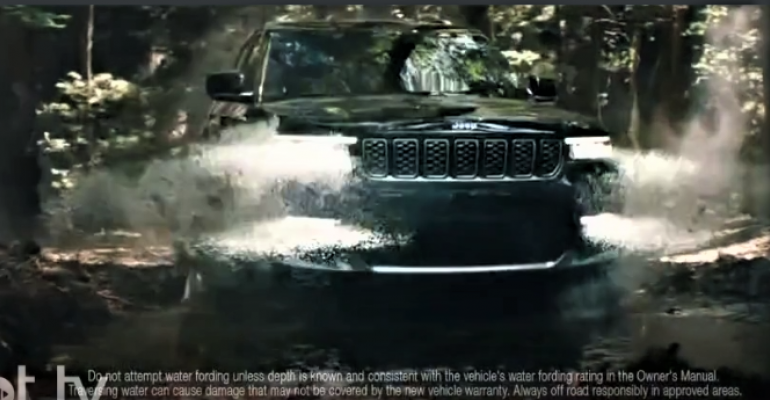 Leading the pack for the week of Aug. 30 was Jeep’s “Wildly Civilized” spot, which ranked No.1 for the third week in a row and was backed again by the highest estimated spend among national automotive TV ads.

College football programming was the favored advertising vehicle for four of the five brands on iSpot.tv’s latest ranking of the most-viewed automotive commercials – the ads generating the highest number of impressions across national broadcast and cable TV airings.

Leading the pack for the week of Aug. 30 was Jeep’s “Wildly Civilized” spot, which ranked No.1 for the third week in a row and was backed again by the highest estimated spend among national automotive TV ads.

Jeep spent over $2.5 million, according to iSpot estimates, mostly on NBC and college football, both of which drove the most impressions. According to Ace Metrix Creative Assessment survey data, 27% of viewers ranked the visuals as the single best thing about the ad. The product itself ranked second at 19%.

Nissan’s “60 Years in 30 Seconds” also retained its position from the previous week, at No. 2, with college football delivering the most impressions. Captain Marvel actress Brie Larson stars in the ad, which topped Ace Metrix survey data rankings in the categories of Attention, Likeability and Desire. The ad scored above the auto industry norm in these categories by 9.6%, 10.1% and 12.5%, respectively.

Next up were two newcomers for the week: Toyota’s “Sneak Out” and Cadillac’s “Lighting the Way.” Both brands spent most of their ad budgets on college football, and in both cases college football delivered the impressions.

Viewers of the Toyota ad virtually tied in what they thought was the single best thing about the spot (which focuses on parents following their son, who sneaks out of the house for tacos with friends). The Toyota brand itself led with 17% of the responses, while the product (a pair of Toyota hybrid 4-doors) ranked just behind at 16%.

Cadillac, meanwhile, put its efforts behind its Lyriq battery-electric CUV, using the song “Lighting the Way” by DJ Shadow and Run the Jewels that has become a staple for the campaign.

Lincoln Motor Company’s “Summer Is a State of Mind” Nautilus spot fell to fifth for the week and was the only spot among the top five that didn’t rely on collegiate football for exposure. Instead, the company stuck with its Fox News approach for both spending and impressions. The spot scored highest among Ace Metrix survey viewers in terms of watchability, at 7% above the auto industry norm.

Lincoln Motor Company: Summer Is a State of Mind