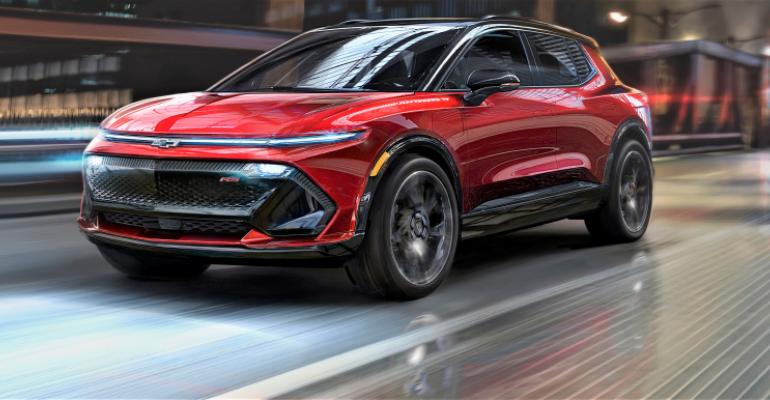 The all-electric versions of the popular crossovers will go on sale next year, with the Equinox starting around $30,000. CEO Mary Barra also provides updates on Ultra Cruise and says 50% of GMs plants in the U.S. will be dedicated to building EVs by 2030.

General Motors and Cruise, its automated-vehicle subsidiary, could be ready to offer personal autonomous vehicles to customers as soon as the middle of the decade, says GM CEO Mary Barra.

In addition to personal autonomous vehicles, GM and Cruise aim to deliver robotaxis while simultaneously boosting sales of battery-electric vehicles, says Barra in an elaborate virtual presentation during  CES 2022 in Las Vegas.

GM made news this week not only with details about the ʼ24 Chevrolet Silverado EV but also offering a glimpse of the battery-electric versions of the Chevrolet Equinox and Blazer CUVs. The automaker also unveiled a new initiative to expand delivery of electric vans to Federal Express and Walmart.

Barra emphasizes GM and Cruise are working to create economies of scale that lower costs and increase quality of Cruise’s rideshare and delivery networks while bringing the positive impacts of autonomous vehicles to a larger audience.

Cruise’s premier consumer-facing feature, Super Cruise, remains on track to be available on 22 models, including the Silverado EV, across GM brands by 2023, Barra says. Ultra Cruise, which will enable door-to-door hands-free driving, enters production in 2023 on the Cadillac Celestiq ultra-luxury sedan based on GM’s Ultium battery architecture.

Barra says GM will be the first company to use Qualcomm Technologies’ Snapdragon Ride platform for advanced driver-assistance technology, defined by software developed in-house by GM.

Co-developed by GM and Qualcomm for Ultra Cruise, the new technology will have the processing capability of several hundred personal computers but is about the size of two laptops stacked on top of each other.

These two new concepts build on the PersonalSpace VTOL (vertical take-off and landing) aircraft and the SocialSpace personal autonomous vehicle introduced at CES last year. Together the four illustrate a potential future for multimodal luxury travel when GM’s Ultium EV and Ultifi software platforms are fused with the autonomous driving technology, Barra says.

GM’s comprehensive plan to reach leadership in BEV market share in the U.S. will include a Chevrolet Equinox BEV with an estimated starting price around $30,000 in the U.S. as well as a larger Chevrolet Blazer BEV. Both vehicles will be available in 2023.

The three products will place Chevrolet BEVs in the industry’s two largest segments and one of the fastest growing segments in the U.S., Barra says.

GM continues working to build a BEV movement beyond its retail business through the BrightDrop commercial-vehicle ecosystem, the Chevrolet Silverado EV Work Truck and component sales for commercial and recreational vehicles.

The effort includes the refinement of an electric dolly that helps move packages from the truck to the doorstep of the recipient.

In addition, FedEx is working on a plan to add up to 20,000 more in the years to follow, subject to further negotiations and execution of a definitive purchase agreement. FedEx unveiled plans to expand its testing of BrightDrop’s EP1 electrified containers to 10 markets beginning in 2022.

Barra says 50% of GMs plants in the U.S. will be dedicated to building BEVs by 2030. It is all part of GM’s ongoing transformation from an automotive company to a platform for innovation and tech solutions.