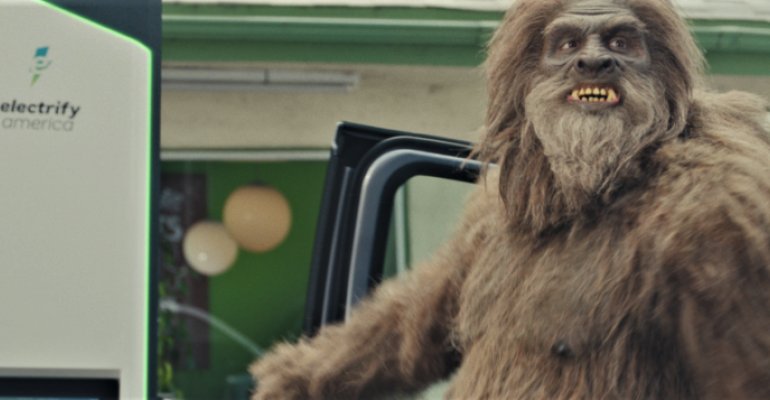 In the “Don’t Believe The Myths” campaign, “mythical” characters including the Tooth Fairy, Sasquatch, a Unicorn and Martians appear in vignettes in which a voiceover tries to explode the “myths” preventing consumers from buying BEVs.

The debate and discussion over adoption of battery-electric vehicles can be as contentious as red and-blue politics itself. Setting aside political tribalism, whether to buy a BEV generally comes down to sticker price and “range anxiety”– the fear of running out of power with no handy recharging option.

Into this debate Veloz, a nonprofit EV advocacy group that supports a public education campaign called www.electricforall.org, is launching a group of video ads that will get $4.25 million in backing for the next 15 months, primarily on digital and social media channels.

The theme of the ads is “Don’t Believe The Myths” and centers on “mythical” characters including the Tooth Fairy, Sasquatch, a Unicorn and Martians appearing in vignettes in which a voiceover tries to explode the “myths” preventing consumers from buying BEVs.

Here’s a rundown of what’s in store:

The headwinds this effort is facing aren’t quite as stiff as they once were, as automakers are touting their BEVs at every turn, and gas prices remain well above $3 a gallon and above $4 a gallon in several states. Knowledge of and curiosity about BEVs, which now have much longer driving ranges than they used to, is climbing. Still, more than a quarter of Americans said they would not buy an electric vehicle, according to a Consumer Reports survey released earlier this year.

Price, range and access to charging stations are the main obstacles to purchase. But Consumer Reports says it identified a new issue that electricforall.org is trying to address.: a lack of education around battery-electric cars, trucks and SUVs.

The only issue with these ads and myth-busting is that some of the myths are only half-myths:

The conversion to BEVs from internal-combustion-engine vehicles should be a lock because of federal and state regulations. It’s all about timing. If new products satisfy consumer needs and wants, forecasts are that 20% of new vehicle sales will be BEVs in 2030. That would be about 3.5 million-3.7 million BEVs per year based on this year’s sales.

The federal government is spending $7.5 billion on a network of fast chargers no further apart on national highways and rural zones than 50 miles (80 km). Even that bill nods to the maintenance issues by stating that states must guarantee that one on four chargers will always be working at these stations.

In discussing the federal government’s spending on new fast chargers, Transportation Secretary Pete Buttigieg said last week at the North American International Auto Show, “Clearly the trajectory here has to be toward a very high standard of reliability.”

BEV Rage is a Problem

Why the maintenance issues? Sometimes it is software glitches. But there also is violence involved, with anti-BEV people inflicting damage on screens and connectors. It is similar to numerous incidents of people who do not like battery-powered scooters flinging them into rivers in cities including Detroit, Paris and Portland, OR.

“Consumer interest in EVs is at an all-time high,” says Josh Boone, Veloz executive director. “Survey after survey shows that buyers are on the cusp of making the switch and automakers are leaping to ready their EV products. That’s why we’re focused on consumer education."