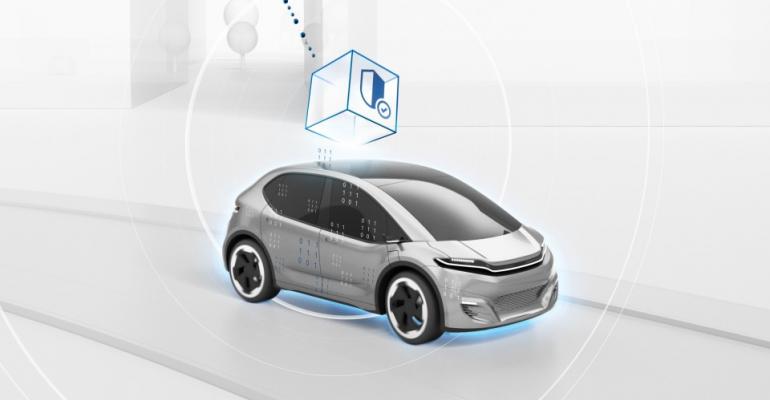 Artificial intelligence will form the backbone of how Bosch’s future products work and are made, a top executive says.

Tier 1 giant Bosch uses the CES 2022 stage to emphasize its evolution to a software-driven company, touting a strong focus on artificial-intelligence-driven technology and its annual investment of $4.5 billion in overall software competence.

In 2021, the supplier announced it would begin offering its software, middleware, cloud services and development tools to other companies through its nearly two-decades-old ETAS subsidiary. By the middle of this year, it expects 2,300 experts from various development areas within Bosch and ETAS to be brought together into a single operation.

That move followed an earlier effort to launch a new Cross-Domain Computing Solutions division (known inside the company as XC) to develop application-specific software and hardware for a range of operations expected to proliferate in coming software-defined vehicles that will feature new electronic architectures and high-powered onboard computers.

The XC division houses 17,000 employees worldwide and is chartered with addressing a $24 billion market Bosch estimates will grow 15% annually between now and 2030. XC will engineer such advanced driver-assistance systems as self-parking and lane-keeping as well as develop the computers and control units that operate those systems.

The supplier says since mid-2020 it has won orders for 3 billion vehicle computers. It also says it has generated more than $10 billion in revenue on advanced driver-assistance technology.

These enormous cultural and organizational shifts mean “we’ll be able to provide solutions to manufacturers and other suppliers more quickly, securely and efficiently in the future,” Tanja Ruckert, chief digital officer, says during a CES 2022 media backgrounder conducted over the internet. Bosch had intended to make its presentation in person at CES in Las Vegas but pulled back due to concerns over COVID.

The internal reorganizations complement a partnership formed in February with Microsoft to develop software that will allow vehicles to connect seamlessly with the cloud, making it easier to update and add new features.

Backing up that investment in software-based technology is internal research, dubbed the Bosch Tech Compass, that the supplier is releasing for the first time at CES 2022. The survey data shows 72% of consumers have a positive view of the impact of digital technology, indicating they believe it is increasing comfort and safety and making work easier.

“They’re optimistic about its potential too,” Ruckert says. “Seventy-six percent of people globally are convinced that technology holds the key to combatting climate change.”

Artificial intelligence will form the backbone of how Bosch’s future products work and are made. The supplier already is developing AI systems at seven locations in the U.S., Germany, India, Israel, and China, overseeing 200-plus projects that so far have generated $350 million in revenue, Ruckert says.

“By 2025, every Bosch product will either be equipped with AI or manufactured with the help of AI,” she adds.

The Bosch Tech Compass survey shows consumers in China and India are most bullish about the positive impact AI can make. But in the U.S., the U.K. and Germany, AI doesn’t rise to be among the top three technologies consumers believe will make a particularly positive contribution to society, suggesting more work is needed to convince people in those markets of AI’s benefits.

To that end, Mike Mansuetti, president of Bosch in North America, says the software-driven technology push will be made with an eye toward cultivating solid relationships with its customers, citing Bosch Tech Compass data indicating four out of five respondents believe the ability to build consumer trust in AI and other digital technology will be essential to a company’s success.

“Trust must be established, and not taken for granted,” he says, noting 83% of those surveyed also believe technology should be focused on solving broader societal challenges, not simply meeting an individual’s needs.

“Above all, what emerges from the Bosch Tech Compass is that people are more aware than ever of both the potential and the pitfalls offered by technology, and that they want those who create it as well as those who legislate its use – in other words, companies and policymakers – to take responsibility for steering its development in the right direction,” adds Ruckert.

To address that, Bosch has published an AI code of ethics for its developers to follow and is leading a Digital Trust Forum consortium that is establishing similar industry standards. Products that meet DTF requirements will carry a Digital Trust Seal, similar to energy-efficiency seals placed on home appliances, the Bosch executives say.

“AI is still in an early phase,” Ruckert says. “If we really want to scale…then people have to have trust in it. That’s why I believe regulation is important. But we have to be careful that we are not doing any overregulation. We have to be careful and find the right balance (between) driving innovation and not (falling) behind (other) countries with less regulations.”

Perhaps somewhat related to trust in digital technology, consumers taking the Bosch survey were asked which way they would prefer to travel in the future, by human-controlled car or by beaming (a la "Star Trek"). Sixty-seven percent of Chinese respondents said by car, compared with just 33% of Americans.

The Bosch executives also tout the company’s stepped-up efforts around sustainability, another key issue identified by its consumer survey.

The supplier says it is the first global industrial enterprise to be carbon neutral and it now is working to reduce emissions generated along the entire supply chain during each product’s development and lifecycle 15% by 2030. That will cut emissions by 67 million metric tons, a figure said to be a 20-fold improvement over the company’s 2018 baseline.