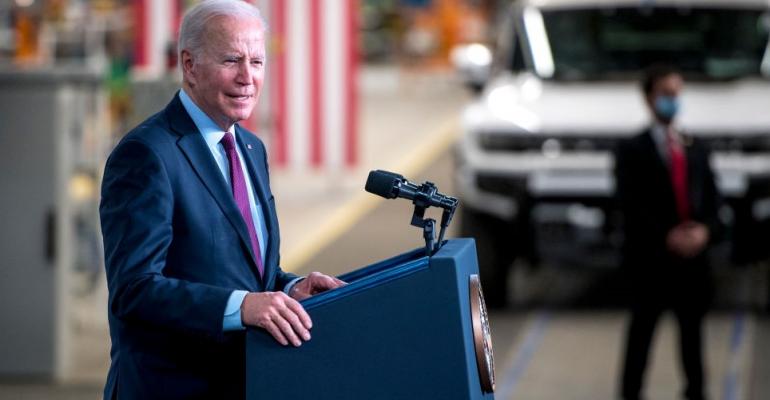 The GMC Hummer BEV, along with the battery-electric Ford F-150 Lightning and Jeep Wrangler 4Xe plug-in hybrid built by union labor, are proof that America has what it takes to compete successfully in the 21st century, President Joe Biden says.

President Joe Biden helps General Motors officially dedicate Factory Zero in Detroit, which expects to start shipping the battery-electric GMC Hummer pickup to dealers before the end of the year.

Biden, recalling how he got to drive vehicles from Manheim Auctions to the Delaware dealership managed by his father, says: “Look, I got a chance to drive pretty incredible machines back then.  I thought – but I never could have imagined – vehicles like the ones that I just took for a spin: the first-ever all-electric Hummer, which I first got to check out back in August when GM brought one to the White House.”

The Hummer pickup (pictured below) and SUV, along with the battery-electric Ford F-150 Lightning and Jeep Wrangler 4Xe plug-in hybrid built by union labor, are proof that America has what it takes to compete successfully in the 21st century, Biden says.

“With this (recently passed) infrastructure law, along with my Build Back Better plan, we’re going to kickstart new batteries, materials and parts production and recycling; boosting the manufacturing of clean vehicles with new loans and new tax credits; creating new purchase incentives for consumers to buy American-made, union-made clean vehicles,” according to Biden, who took a spin in a Hummer before addressing a crowd of GM employees, UAW officials and political figures.

GM says the dedication of Factory Zero represents a major milestone in its commitment to an all-electric future, having spent $2.2 billion to renovate the aging factory to build all-electric trucks and SUVs. Besides the GMC Hummer pickup and SUV, Factory Zero will be home to the Chevrolet Silverado BEV and Cruise Origin autonomous shuttle, among other yet-to-be-announced BEVs, according to GM officials.

Mary Barra, GM’s chairman and CEO, notes the plant was completely renovated in less than two years. “GM’s U.S. manufacturing expertise is key to achieving our all-electric future,” says Barra. “This is a monumental day for the entire GM team. We retooled Factory Zero with the best, most advanced technology in the world to build the highest quality electric vehicles for our customers.”

As part of the renovation, GM set up six separate production “modules” at the plant, which will have 2,200 employees when fully operational. Currently two of the modules are being used to build pre-production models.

However, no rollout ceremony hailing the first production model is scheduled. GM instead will build a “statistically significant” sample of pre-production vehicles that are checked for defects or quality issues, company spokesman Dan Flores says.

All of the pre-production vehicles have to pass through the “Ship to Commerce Quality Valve,” which basically is a full review by the plant management and chief engineer for the vehicle.

In the case of a brand-new vehicle, the Ship to Commerce Valve could also include other senior executives up to and including a review by GM President Mark Reuss and Barra, Flores says.

Once the Ship to Commerce Valve opens, units formerly designated as pre-production will be sent to dealers. “I don’t know when the valve will open, but we will begin shipping vehicles before the end of the year,” Flores says.

Dealers initially will receive Hummer pickups. Factory Zero next will begin building Cruise Origin and Silverado BEVs, followed by the Hummer SUV (pictured below) in early 2023, according to LMC Automotive, the forecasting partner of Wards Intelligence.

The shipments will mark another milestone for the plant, which opened in 1984 and had replaced an aging factory straddling Detroit and Hamtramck, MI, that served as the base of operations for the Cadillac Division.

Three years ago, the Detroit-Hamtramck or “Poletown” plant, as it was known in the neighborhood it occupies, was threatened with permanent shutdown in a corporate restructuring, drawing sharp criticism from the UAW.

Terry Dittes, the UAW vice president who led a 40-day strike against GM in 2019, recalls union negotiators came away from the table at the end of the walkout with a company commitment to renovate the plant, which will now employ double the number of workers it did when GM contemplated closing it permanently.