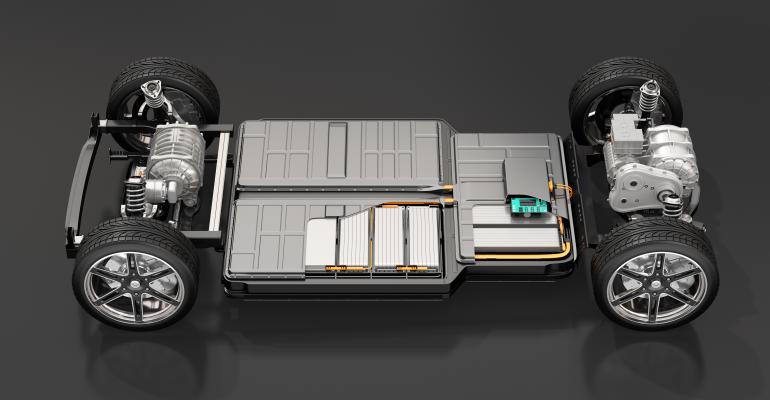 Battery packs expected to use more mixed materials – including composites – for closures by 2025.
Industry News

Industry insiders see battery packs getting lighter and playing a bigger role in the structural rigidity of the vehicle as automakers push for longer ranges, faster charging and lower costs for next-gen battery-electric vehicles on the way by the middle of the decade.

Battery-electric vehicles in 2025 will need to travel 350 miles (563 km) on a full charge and replenish spent batteries within 10-20 minutes, according to a Wards Intelligence survey of industry insiders sponsored by Teijin Automotive Technologies.

Battery packs will evolve into key structural components for BEVs by the middle of the decade, even while becoming lighter, as automakers and suppliers use a mix of materials strategically to cut weight and lower costs, the study shows.

Conducted from mid-August through early September 2021, the survey drew responses from more than 260 industry executives and engineers at automakers, Tier 1 and 2 suppliers and consultancies.

BEV demand is expected to grow sharply to an estimated 29 million sales annually worldwide by 2030 from just 4 million in 2020, according to a forecast from LMC Automotive.

The number of BEV nameplates available globally is set to climb from dozens now to hundreds by 2025, as automakers increase their model offerings amid expected post-2030 regulations ending the sale of new internal-combustion-engine vehicles in many key global markets.

For the industry to bring BEVs to market that have longer ranges and faster charge times, as well as those that are price-competitive with ICE models, next-generation battery packs will need to be lighter and more energy-dense than their predecessors, and cost less as well, say respondents to the 2021 Battery Electric Vehicle Future survey.

Among the key findings of the survey:

WardsAuto will post a more detailed look at the Wards Intelligence/Teijin Automotive survey in coming weeks.