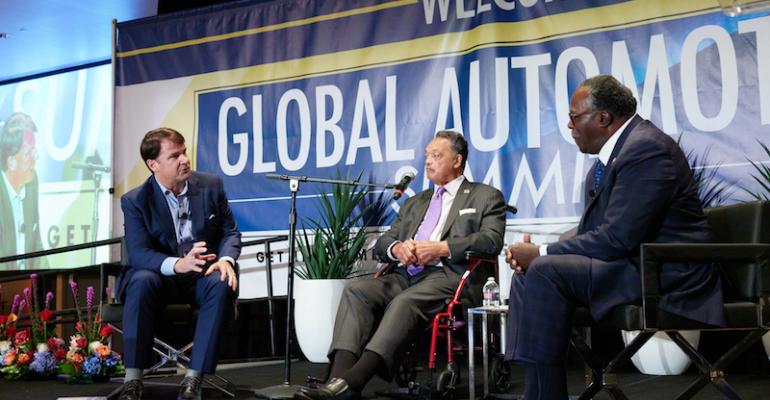 The auto industry’s efforts in the past three years to diversify its ranks and supplier base with minorities is paying off, but there’s more work to do.

DETROIT – The auto industry’s management ranks have never been viewed as the most diverse or inclusive across U.S. businesses. But there are signs that the overall picture of racial diversity is getting better.

The Rainbow PUSH/Citizenship Education Fund Automotive Project this week released its annual Automotive Diversity Scorecard, and for the first time in the initiative’s 23 years of existence, none of the companies receive a red rating. A red rating indicates “non-existent, non-disclosed or not-reported.”

The bottom line, notes Rainbow PUSH founder Rev. Jesse Jackson: All 12 companies scored by the organization have set goals of being more diverse, inclusive and equitable across genders and races, and all 12 are making progress. “And that’s a first,” Jackson says at the Global Automotive Summit here at Motor City Casino where the scores were released.

Toyota and General Motors both received green scores in four of the six areas rated – the most among the 12 automakers surveyed this year. The only yellow (cautionary) score Toyota earned was in not yet meeting goals on minority-owned dealerships. GM’s only yellow mark was on achieving targeted diversity in overall employment.

The purpose of the scorecard is to give automakers a benchmark to measure their progress, says John A Graves, chairman of the Global Automotive Summit.

“The scoring is meant to reflect the progress at each automaker, and progress is rated against the company’s stated goals,” Graves says. “The scores do not represent a competitive comparison of automakers against one another.”

The auto industry has not had issues recruiting workers of color to production facilities. But for the past quarter-century, roughly the time that the scorecard has been in existence, and before then, the industry has had a difficult time recruiting upwardly mobile, educated African-American workers and managers to their ranks. That struggle continues today as the industry migrates away from the internal-combustion engine to a battery-driven mobility industry that has traditional engineers giving way to software engineers and systems engineers.

“We struggle to get kids to come into our industry,” says Mark Stewart, Stellantis COO. And that, adds Stewart, extends disproportionately to minority populations.

Of the six categories rated by Rainbow PUSH – employment, advertising, marketing, procurement, dealers and philanthropy – marketing is the category that garnered the most yellow scores. The score indicates shortfalls in companies meeting their stated targets of spending money in media spaces owned and digested by minority populations.

The companies scoring all yellow “cautionary” scores are BMW, Mercedes-Benz and Volkswagen. It’s worth noting that nine of the 12 companies got green scores for philanthropic support of minority causes and organizations. The German automakers were the three that scored yellow, and thus have room to grow in supporting organizations that strive for equitable treatment and support of minorities.

In most cases, dollars follow the business. The leading brands based on African-American buyers are GM, Toyota, Ford, Stellantis, Honda and Hyundai so it is not surprising that those companies score best.

Automakers added 109 minority-owned dealerships in 2021, bringing the total to 1,366, the most since 2006, according to Rainbow PUSH. It was the industry's biggest one-year increase since 2012.

GM had 303 minority dealers at the end of 2021 to lead the industry. Ford added eight minority-owned dealerships from 2020 to 2021, the most by one company during that time period in the industry. The U.S. has about 18,000 new-car dealerships in total.

Ford CEO Jim Farley, who addressed the gathering, notes that during the 2008-2009 economic debacle that saw GM and Stellantis forebear Chrysler file for bankruptcy protection (while Ford did not), an effort to increase minority dealerships was defunded in a companywide belt-tightening. “We lost a lot of ground that we are still making up,”  Farley candidly says.

Farley says at one time Ford was an industry leader in African-American managers and diversity management. But he admits today there are only three African-American vice presidents among 30 at the company, and management levels below that level are deficient in diversity.

“It’s unacceptable and we are working at both improving our record as far as management, as well as doing a better job of attracting more minority customers,” he says.

There has been an undeniable spike in companies’ awareness of diversity issues since the 2020 murder of George Floyd in Minneapolis by a police officer. That event inspired demonstrations worldwide and moved many corporations to invest more money and effort in trying to attract a more diverse workforce and to support black-owned businesses and suppliers, as well as launch education initiatives aimed at lifting the career potential of minority populations.

Stellantis, for example, is working with the Detroit Public Schools and Wayne Community College, funding education ladder programs for youth from predominantly minority populations in manufacturing, technology and careers as technicians, especially in the electric mobility fields. Ford has had its Ford Motor Co. Scholarships since 1989, and the program has an excellent record boosting students of color. GM, Toyota, Hyundai and Nissan all have similar efforts.

Investment and resources spent by companies on diversity is good citizenship and there is a moral benefit to any organization. But there also are financial and performance dividends in building diversity and inclusion the right way, say experts in the field.

Consulting firm Russell Reynolds, for example, does extensive and ongoing studies and surveys of companies and business leaders in the areas of diversity and “inclusive leadership.” Only 40% of executives believe their leadership is held accountable for fostering an inclusive culture and only 35% say their leadership considers inclusive behaviors as promotion criteria, according to an RRA Diversity and Inclusion Pulse survey. The survey asked more than 1,800 leaders globally about their organizations’ diversity-and-inclusion strategies and practices.

Smart CEOs are changing the cultures inside their companies to be more accountable on diversity and inclusion metrics because they understand Generation Z employees, for example, entering the ranks won’t choose companies that do not have enlightened diversity records and practices.

And a more diverse organization is more likely to make smarter decisions for an increasingly diverse population and customer base, the Russell Reynolds survey findings point out.

By 2040, estimates the U.S. Census Bureau, whites will reach minority status. By 2050, researchers project there will no longer be a clear racial or ethnic majority in America. And immigrants and their children will account for 83%of U.S workforce growth.

“When I visit our plants, I see amazing diversity on the floor. It is a true reflection of the world,”  Farley notes. “But we have to achieve that same kind of diversity among the leadership at our organizations (plants)” and the company as a whole.”