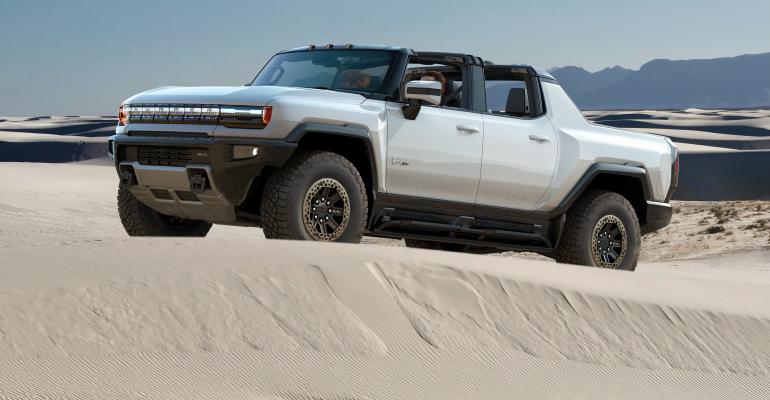 No automaker can hang back and let their competitors take the early risks without potentially falling behind in developing EVs and autonomy, says analyst Mark Wakefield of AlixPartners.

Analysts and investors worry about what analyst Mark Wakefield of AlixPartners calls a “profit desert” the auto industry has to cross – the unknown number of years  automakers will be pouring billions of dollars into electric vehicles and autonomous driving before there’s enough consumer demand to produce an adequate payoff.

“We definitely see this period is going to be a difficult period to go through, but not one anyone can wait out,” Wakefield says in a recent AlixPartners Global Automotive Outlook webinar. That is, no automaker can hang back and let their competitors take the early risks without potentially falling behind in developing electrified vehicles and autonomy.

Not surprisingly, in a separate webinar, executives for General Motors and Ford say they’re confident they have more than adequate resources to cover their investments. They maintain consumer demand will kick in fast enough and ultimately generate returns at least comparable to those of vehicles with internal-combustion engines.

If anything, the greatest risk would be getting left behind, GM Chief Financial Officer Paul Jacobson says at the Deutsche Bank Global Auto Industry Conference. His presentation follows GM’s announcement on June 16 that it plans to boost its investments in BEVs and autonomous vehicles to $35 billion through 2025, a 75% increase vs. a $20 billion forecast in March 2020.

“I would characterize these investments as low-risk. The only thing that we might get wrong is we might build them sooner than we need,” Jacobson says. “But there’s no doubt we’re going to need these on our journey as we’re going forward.”

Still, all automakers are going to have to cross that “desert” and hope consumer demand and sales volume eventually generate enough profit, says Wakefield of AlixPartners. Wakefield is the Detroit-based global co-leader of the analysis and consulting firm’s automotive and industrial practice.

According to AlixPartners, in the past 12 months total automaker investment in battery electric vehicles has “accelerated dramatically,” to $330 billion globally in the next five years. That’s a 41% increase compared with the comparable 5-year forecast a year ago, Wakefield says.

The net result is, the lack of scale for BEV platforms will be “weighing on OEM financial performance for years,” AlixPartners says.

Ford CEO Jim Farley says in a separate presentation at the Deutsche Bank conference that achieving scale as soon as possible is exactly why Ford is rolling out its first wave of mass-market BEVs in the product segments where the automaker has its biggest market share.

In an announcement timed to precede Farley’s presentation, Ford says it has 100,000 advance orders for the recently introduced F-150 Lightning and 20,000 orders for the E-Transit.

By introducing battery-electric versions of its best-selling vehicles, Ford plans to achieve scale in a couple of ways, Farley says. One is that Ford products will share content, such as batteries and other drivetrain components that are exclusive to BEVs, between product segments.

Second, Ford’s BEVs also share non-BEV components with their ICE siblings, representing up to about 50% of the total cost of the vehicles, he says.