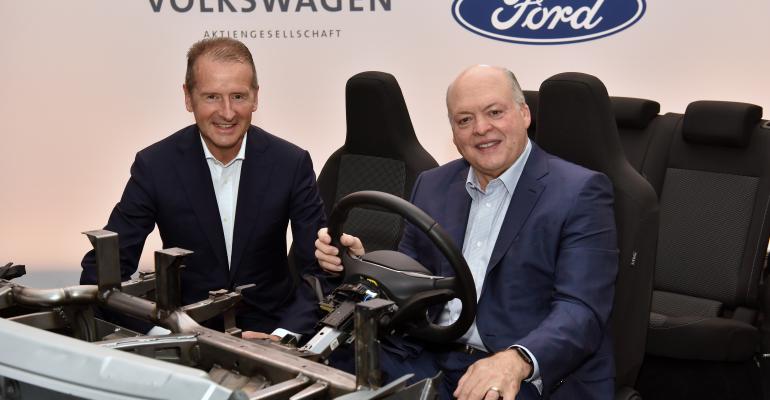 Volkswagen and Ford now are collaborating on EV and autonomous platforms.
Industry News

The Mobility Disruption Is Well Under Way

What’s so remarkable is that only a decade ago no one would have dreamed of doing any of this.

We’ve been warned the auto industry is about to go through upheaval and disruption on a scale we’ve never seen before.

GM’s CEO Mary Barra predicts the industry will go through more disruption in the next five years than we’ve seen in the past 50 years. But Barra first said that in 2015. Four years later the future is unfolding just as she predicted.

Automakers and suppliers are frantically searching for partners, spinning off old-tech operations or restructuring their companies, involving lots of layoffs. They’re all worried about the tipping point when battery-electric cars, autonomous cars and mobility services start to hurt their traditional businesses and product lines. Yet they must continue to invest heavily in their traditional businesses because that’s where they make all the profits they need to invest in the new stuff.

But when will they know when to stop investing in internal-combustion technology? When will they start making profits on BEVs, or AVs or Mobility-as-a-service (Maas)? No one knows. But they know that day is coming, so they’re not sitting around and waiting for the worst. Most of them decided they’d better start taking action now.

This is why Ford and VW just joined forces. It’s why General Motors and Honda are working together, why Mercedes and BMW are collaborating, and why FCA is keen to join the Renault-Nissan-Mitsubishi alliance. No automaker has pockets deep enough to go it alone. They need partners.

Automotive suppliers are not necessarily looking for partners, but they’re restructuring their operations at a pace we’ve never seen before.

A traditional supplier such as Delphi packaged up its new-tech operations and spun it off as a new company, Aptiv. Autoliv did the same with Veoneer. Bosch sold off its alternator and generator business, now known at SEG Automotive. Honeywell spun off its turbocharger business which is now known as Garrett Motion. Tenneco sold its powertrain business to Federal Mogul. And Continental is doing an IPO with its powertrain group.

What a head-spinning list of changes, and yet it’s not even a complete list. Moreoever, these changes are just getting going. There’s more to come. And what’s so remarkable is that only a decade ago no one would have dreamed of doing any of this.

Most of these actions took place while the industry was relatively healthy. But now the global auto industry is slowing down, and that will only increase the urgency to make changes faster. Plant closings, layoffs and bankruptcies could well become a harrowing routine.

And yet, while there is so much uncertainty about the future of the industry, there also could be unprecedented opportunity. At some point the cost of EV batteries will come down so that automakers can make solid profits selling them without government subsidies. Mobility-as-a-service could become far more profitable than selling cars to consumers. And data monetezation could bring in a trillion dollars of revenue to the industry in a little over a decade.

Or at least that’s the hope. The industry believes there’s a better future that awaits us. Now we just have to get from here to there. And we will. But getting there will be the roughest ride this industry has ever seen – and it’s already under way.