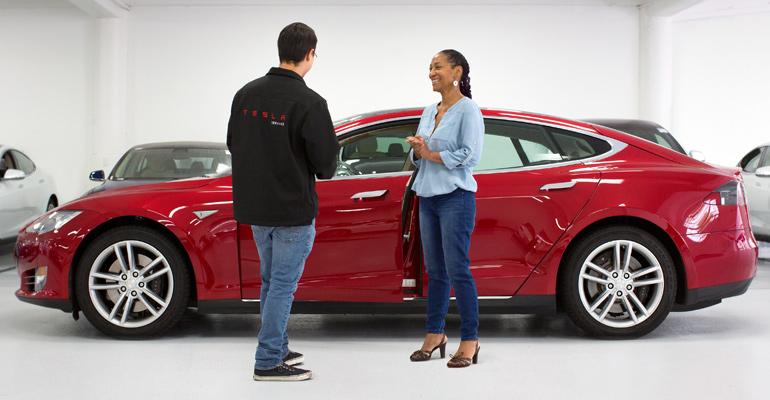 Most car buyers want to drive a car before they plunk down hard-earned money.
Industry>IdeaXChange

Tesla has saturated the markets where it can legally sell cars. It needs to increase market share in the 20 states that have banned or limited how many stores it can have.

When Tesla announced it would bypass the dealer franchise system and sell cars through company stores, it seemed like a logical decision for a Silicon Valley startup. Why not just pocket the profit the dealer gets?

But it hasn’t worked out very well. In fact, relying on company stores is holding the company back.

I live in Michigan, which banned Tesla from selling cars directly to consumers. Anyone who lives here must travel to another state where it’s legal to buy one. And Michigan is not the only one. Eleven states banned direct sales and nine greatly limit how many company stores Tesla can have, usually to five or less.

These states are making a terrible mistake. This is restraint of interstate trade and blatantly illegal. Tesla should not be forced to use the dealer franchise system just because the dealer lobby says so. That’s like telling people they can’t buy a hamburger unless it’s through a fast food franchise.

And yet Tesla made a strategic mistake by not embracing the franchise system. The automaker’s stores clearly are not getting the job done. In fact, in a supposed cost-saving move, the company now is trying to close most of its stores and force customers to buy their cars online. That may work for the early adopters who are dying to get their Tesla, but it’s not going to play in Peoria. Most car buyers want to physically see and touch and drive the car they want before they plunk down their hard-earned money.

Tesla’s strategy worked fine when it was selling two models in very low-volume. But it hit a tipping point with the Model 3. In fourth-quarter 2018, Tesla outsold every luxury brand in the U.S. market except Mercedes and BMW. And then it hit a brick wall.

First Tesla ran out of those $7,500 tax credits that go to people who buy electric cars. Then its logistics system choked. It’s now building cars in such volume that it cannot physically transport them fast enough to its customers. Tesla even started building its own car haulers to try and solve the problem. But the issue goes deeper than that.

Since it’s selling directly to consumers, Tesla cannot book cars as sold until a customer actually takes delivery. Automakers who use the franchise system book their cars as sold as soon as they roll off the assembly line because dealers already have bought them.

Tesla posted a loss for the first quarter this year and reportedly had about 8,000 cars in inventory. If they had been booked as sold that could have boosted the quarter’s revenue by about $380 million. Tesla still would have lost money, but who wouldn’t want to add hundreds of millions of dollars to their top line?

And there’s a bigger problem. Tesla has saturated the markets where it can legally sell cars. Anyone who lives in California or travels there will tell you the state is crawling with them. They’re everywhere.

That’s why Tesla desperately needs to increase its market share in the 20 states that have banned sales or limited how many stores it can have. Collectively, those states have a population of 166 million people who buy more than 8 million new cars a year. That’s a huge chunk of the market Tesla is missing.

Tesla ended the first quarter with a 1.7% U.S. market share. If it maintained that share and started selling cars in those 20 states, it potentially could boost sales by more than 130,000 vehicles a year.

No doubt embracing the franchised dealer system would be a bitter pill for Elon Musk to swallow. He wants Tesla to be a disruptive and a different kind of car company. But wouldn’t it be better to simply swallow your pride and potentially double the size of your home market?

Right now, Tesla is fervently praying sales in China and Europe will make up for the shortfall in the U.S. And maybe that will happen. In the meantime, there is a clear pathway for Tesla to sell a lot more cars. And that’s through franchised dealers.