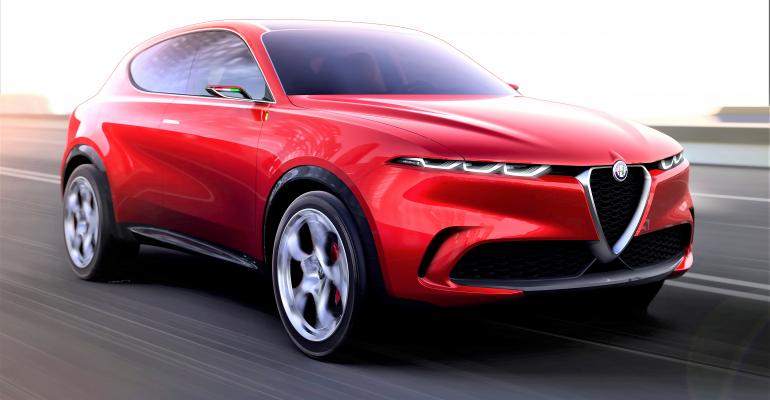 Slated to go into production by the end of 2020, the Audi Q3 and BMW X1 rival is to sit below the Stelvio luxury CUV on price and will be the first series-production Alfa Romeo with plug-in gasoline-electric hybrid technology, officials with the Italian automaker say.

GENEVA – Alfa Romeo previews a new entry-level CUV model with the unveiling of the Tonale concept.

Slated to go into production by the end of 2020, the Audi Q3 and BMW X1 rival is to sit below the Stelvio luxury CUV on price and will be the first series-production Alfa Romeo to feature plug-in gasoline-electric hybrid technology, officials with the Italian automaker say.

Stylistically, the new Tonale leans heavily on the larger Stelvio. However, its appearance is enhanced with elements referencing earlier Alfa Romeo models; its 21-in. wheels are inspired by those used by the 33 Stradale, while the narrow LED headlamps reflect the styling of the SZ.

Like the Stelvio, the Tonale takes its name from a famous Italian mountain pass. One of the real surprise debuts of this year’s Geneva auto show, it forms an integral part in Alfa Romeo’s plan to increase sales to over 400,000 annually – a target long coveted by the FCA-owned company, which sold around 150,000 cars globally in 2018.

“We expect the Tonale to become our best-selling car,” says Alfa Romeo’s European brand boss Roberta Zerbi. “Combined with our other new products, we expect to have a car to suit the needs of around 80% of all European car buyers by 2024, and that should place Alfa Romeo in a much stronger position than today.”

Zerbi confirms the Tonale will go into production with few changes to the concept, beyond the addition of windshield wipers and the adoption of a 5-seat interior layout.

“This concept gives a good indication of the production model,” she says. “It is accurate in not just the proportions, but the details, including the telephone-dial wheels, the triple headlamps and the dashboard lines.”

The Tonale is to use a hybrid system that its FCA sister company Jeep will introduce to the Renegade lineup later this year. Zerbi offers no details, except to say it combines a front-mounted gasoline engine powering the front wheels and a rear-mounted electric motor that drives the rear wheels.

The Jeep Renegade’s new hybrid system will deliver up to a claimed 236 hp. Alfa Romeo won’t say whether the Tonale will receive the same output, although officials hint upper-range Quadrifoglio models are likely to eclipse that figure as part of a more sporting image for the Italian brand.

Instead of the Dynamic performance mode of previous Alfa Romeo models, the Tonale receives a Dual Power mode. It is designed to provide maximum performance from both the combustion engine and electric motor in an all-wheel-drive setup.

Alfa Romeo reveals little about the technical side of the Tonale at its unveiling in Geneva, although it is claimed to be based on the same platform as the Renegade. This suggests it is likely to offer a choice of conventional gasoline engines alongside the gasoline-electric hybrid system together with either front- or all-wheel drive. Diesel engines featuring SCR filters are likely for European markets. 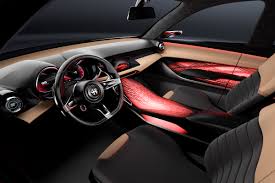 “We will not launch just another CUV. We will launch a CUV as only Alfa Romeo can.”

“We have put the driver at the center of the action, with incredible steering feel,” he says.

Inside (above, left), the Tonale concept makes extensive use of leather and Alcantara and boasts a 4-seat layout with individual seats both front and rear. A less-luxurious treatment and 5-seat layout are expected for the production version of the new CUV due out next year. The dashboard features a 12.3-in. (31-cm) digital instrument display and 10.3-in. (26-cm) central touchscreen.