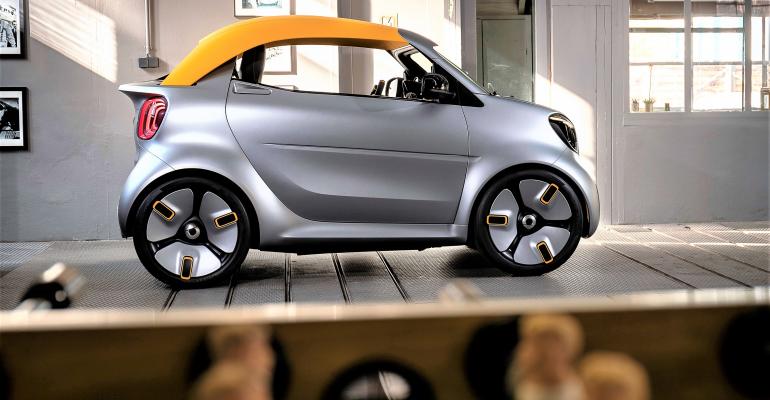 Changes over the standard Smart Fortwo cabriolet include a shallower windshield and prominent domes behind the seats for added rollover protection.

Mercedes-Benz’s Smart city car division reveals an updated speedster version of its Forease concept car dubbed the Fourease+ ahead of its public debut at the Geneva auto show.

The revised 2-seater, first unveiled in open-top guise at the 2018 Paris auto show, receives a reinforced fabric roof that fits over its cabin, protecting its occupants from the elements, together with other subtle styling revisions.

Like the original Forease, the concept is based on the Smart EQ Fortwo cabriolet and is intended to underline Smart’s “uncomplicated solution to urban mobility” with a battery-electric driveline and compact dimensions.

Changes over the standard Smart Fortwo cabriolet include a shallower windshield and prominent domes behind the seats for added rollover protection.

The new roof, described as a hard shell cover in a textile fabric, is designed to be removable. It is light, robust and yet suitable year-round, Smart says.

“The Smart Forease+ shows the spirit of the brand: individual, scaled back and sustainable. It is also a statement of urbanity typical of Smart,” says Katrin Adt, head of Smart.

The Forease+ borrows heavily from two previous open-top Smart concept cars: the Crossblade revealed in 2002 and the Forspeed shown in 2011 at Geneva.

The Crossblade boasted an even more minimalist design than the Forease+, eschewing doors, roof and windshield. It was conceived as a concept car but subsequently was placed into limited production.

The Forspeed was created to showcase Smart’s first-generation electric driveline. It featured a wind deflector in place of a windshield as well as rollover hoops integrated into its body structure behind its seats.