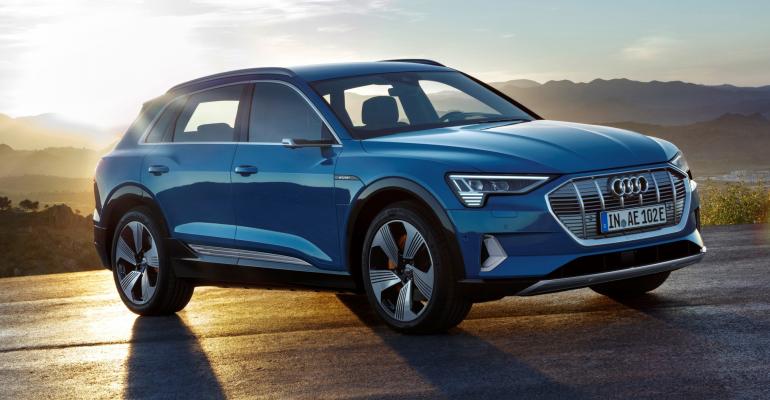 Fourth Audi e-tron Model to Be Previewed at Geneva

Audi is planning to preview its fourth electric-powered e-tron model at the 2019 Geneva auto show in early March.

The compact SUV, described as being similar in dimensions to the recently superseded first-generation Q3, is to be unveiled in lightly veiled concept-car guise prior to a planned sales launch in 2021, sources close to the German automaker confirm.

It is being billed as the most affordable of the early wave of e-tron models and is expected to become Audi’s biggest-selling electric vehicle by the middle of the next decade, with a price tag comparable with high-end versions of the new second-generation Q3.

The price-leading electric-powered Audi model, which may receive the name Q4 e-tron, is expected to draw many of its styling cues, including its front-end appearance and shoulder line, from the larger e-tron SUV.

Based on parent company Volkswagen’s MEB (Modular Electric Architecture) platform, a new structure developed expressly for EVs, the 5-seater is conceived to complement the recently introduced e-tron as well as the e-tron Sportback and e-tron GT.

Audi intends to use up to five different EV platforms.

The e-tron and e-tron Sportback are underpinned by an adapted version of Audi’s existing MLB (Modular Long Architecture) platform, while the e-tron GT is based on the so-called J1 platform initially developed by sister company Porsche for the Taycan.

Another EV platform, the premium platform electric or PPE, is being developed in an engineering joint venture between Audi and Porsche.

The ability of the MEB to house batteries completely within a flat floor structure also promises to provide the new Audi model with generous levels of interior accommodation.

Audi also is developing an all-electric version of the existing Q2, but officials at its Ingolstadt headquarters in Germany say it is planned to be sold exclusively in China. It is based on a lengthened version of the MQB (Modular Transverse Architecture) platform as used by the Volkswagen e-Golf.

Audi has announced plans to build 12 all-electric models by 2025.