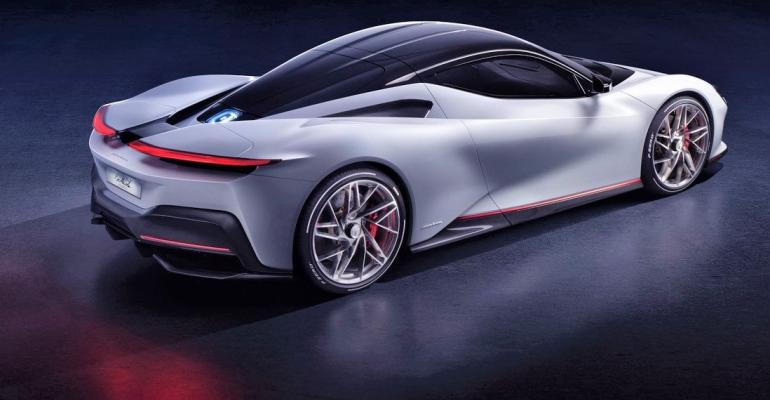 The company says the coupe, with four electric motors, will accelerate from 0-60 mph (100 km/h) in less than two seconds . Pininfarina has committed to a limited production run of 150 units, selling at some $2.3 million each, with first deliveries expected by 2020.

The Pininfarina Battista, a 1,900-hp exotic electric vehicle with a carbon-fiber body and a motor at each wheel, debuts at this week's Geneva auto show.

The two-seat coupe is the first luxury vehicle from Munich, Germany-based Automobili Pininfarina, which was established one year ago by the Mahindra Group to challenge the established Bugatti and Pagani hypercars powered by turbocharged 12-cyl. and 16-cyl. powerplants.

As the company's first model (in a range of four already planned), the Pininfarina Battista was created to honor the founder of the world-famous coachbuilder.

Its aerodynamic, elegant bodywork was designed, engineered and built in Turin, Italy, by Pininfarina (established in 1930).

The groundbreaking hypercar offers stellar performance combined with ultra-luxury. The four electric motors produce 1,696 lb.-ft. (2,300 Nm) of torque and will accelerate from 0-60 mph (100 km/h) in less than two seconds and on to 186 mph (300 km/h) in less than 12 seconds, all with a potential zero-emissions range of more than 280 miles (450 km). The hypercar was developed in cooperation with renowned Croatia-based specialist Rimac, which supplied high-tech components.

Michael Perschke, Automobili Pininfarina CEO, says his German company is committed to a limited production run of 150 units, selling at some €2 million ($2.3 million) each, with first deliveries expected by 2020.

Bonzanigo says the look and character of the car will be finalized according to the buyer’s expectations, with a range of options: discreet and elegant, or perhaps with a stronger and more visual impact. Preliminary views in California have drawn polarized comments from potential customers. Some love the car as it is, while others want a more bullish look.