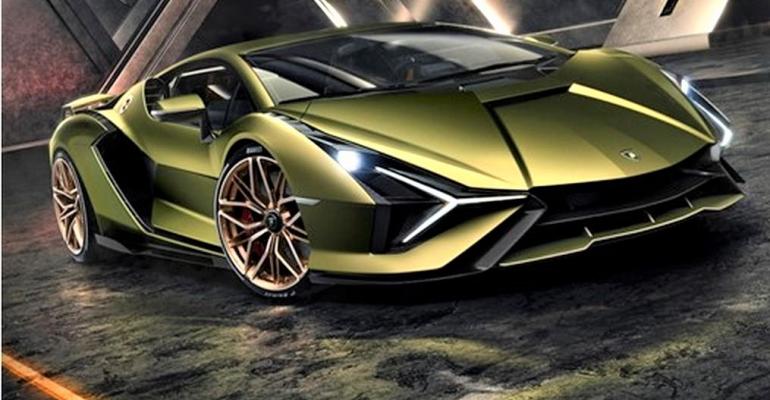 A 48V motor delivering 34 hp incorporated into the gearbox, combined with Lamborghini’s 785-hp V-12 engine, combine to give the Sian a total of 819 hp.

Lamborghini unveils the Sian, a hybrid super sports car the luxury automaker says is the fastest Lamborghini yet with a top speed of more than 217 mph (350 km/h), at the Frankfurt auto show.

A 48V motor delivering 34 hp is incorporated into the gearbox to provide immediate response and improved performance. Lamborghini says the Sian is the first low-voltage hybrid with a direct connection between the electric motor and wheels.

The motor also supports low-speed maneuvers such as reversing and parking with electric power.

Rather than a lithium-ion battery, the Sian uses a supercapacitor, a technology pioneered in the Lamborghini Aventador but enhanced to store 10 times the power. It is three times more powerful than a battery of the same weight and three times lighter than a battery producing the same power.

Located in the bulkhead between cockpit and engine, the electric system with the motor and supercapacitor weighs only 75 lbs. (34 kg). Its weight-to-power ratio of 1.0 kg/hp is better than that of the Aventador SVJ and is achieved through extensive use of lightweight materials. 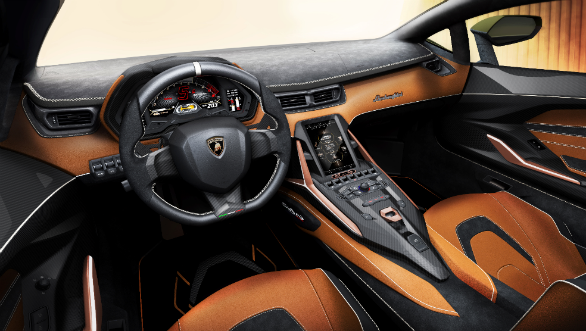 Symmetric power flow ensures the same efficiency in both charging and discharging cycles, which Lamborghini claims is the most lightweight and efficient hybrid solution.

This advanced technology combines with the 6.5L V-12, which incorporates titanium intake valves and is rated at 785 hp at 8,500 rpm, the highest-ever output from a Lamborghini power plant.

Combined with the hybrid system’s 34 hp, the Sian delivers a total of 819 hp and still produces the emotive resonance demanded from a Lamborghini engine, the automaker says.

The Sian incorporates an advanced regenerative braking system. Using the symmetric behavior of the supercapacitor, which unlike li-ion batteries can be charged and discharged with the same power, the Sian’s energy-storage system is fully charged when the vehicle brakes.

The stored energy is an instantly available power boost, allowing the driver to draw immediately on increased torque when accelerating away, up to 80 mph (130 km/h) when the motor automatically disconnects, improving maneuverability and making it more than 10% faster than a car without this system.

The system also delivers instant acceleration in low gears, with improved traction force provided by the combination of V-12 engine and hybrid system.

This makes the Sian the fastest-accelerating Lamborghini ever, achieving 0-62.5 mph (100 km/h) in less than 2.8 seconds.

Lamborghini Chairman and CEO Stefano Domenicali says the Sian represents the first step in the automaker’s route to electrification and expedites its next-generation V-12. 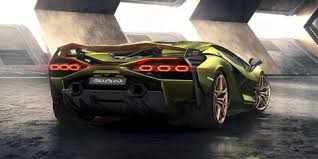 Not only does the Sian deliver a formidable hypercar design and engineering tour de force today, it augments the potential for Lamborghini as a super sports car brand for tomorrow and for decades to come, even as hybridization becomes more desirable and inevitably essential,” he says in a statement.

Chief Technical Officer Maurizio Reggiani says the company set out to create the best hybrid solution for a Lamborghini sports car to provide the first step in its electrification strategy.

“With the Sian, we are defining our route to innovation and we are setting new rules in new technologies, instead of just following existing solutions. The result is the Lamborghini Sian, which includes the world-first application of a supercapacitor for hybridization and new materials technology.”

The car is not yet available for sale, but head of design Mitja Borkert says each of the 63 Sian purchasers will style their own vehicles. “Sixty-three individuals worldwide will own not only the fastest but a unique Lamborghini,” he says.