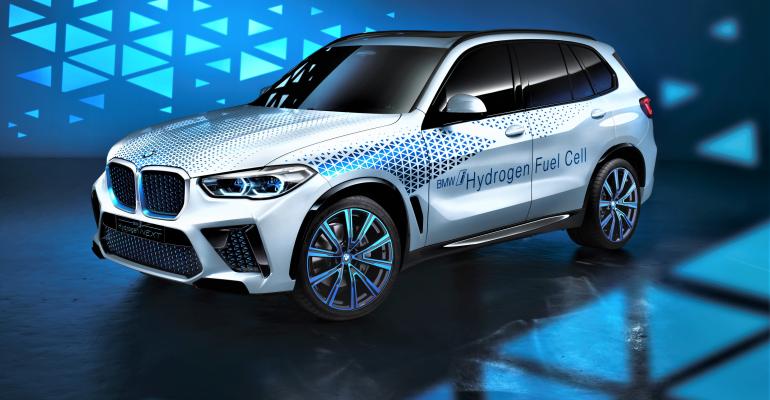 BMW Reveals i Hydrogen NEXT Concept

The production version of the i Hydrogen NEXT is planned as a precursor to a range of FCVs BMW already has under development and plans to begin offering in 2025 at the earliest.

BMW confirms plans to begin offering a hydrogen fuel-cell-powered version of the X5 with the unveiling of a new concept at the 2019 Frankfurt auto show.

Called the i Hydrogen NEXT, the zero-emission SUV has been created to showcase ideas for the new X5 model, which BMW says will go into limited production in 2022 using technology being developed in a joint venture with Toyota.

The production version of the i Hydrogen NEXT is planned as a precursor to a range of FCVs BMW already has under development and plans to begin offering in 2025 at the earliest.

However, in a move that hints the plan remains fluid, the German automaker says the timing of hydrogen-powered models “very much depends on market requirements and overall conditions.”

The statement is seen as referencing the Chinese market, which initiated incentives for FCVs earlier this year as part of a broader strategy aimed at providing long-range zero-emission compatibility for larger passenger and commercial vehicles.

However, BMW officials have told Autocar the decision to introduce FCVs will be driven not only by development in China but also by dynamics in other key markets including Europe and North America.

Despite high production costs, FCVs are gaining acceptance as an alternative to battery-electric vehicles in part because they can provide refilling times similar to those of gasoline and diesel cars. They also can store hydrogen in cryogenic tanks, giving them a range comparable to that of combustion-engine models.

Water is the sole byproduct in the chemical process that allows fuel-cell vehicles to convert hydrogen and oxygen to electricity to drive an electric motor.

The i Hydrogen NEXT reveals BMW’s latest hydrogen fuel-cell technology can be integrated into existing models without significant styling changes. Bodywork modifications to more-conventional combustion-engine and hybrid versions of the upmarket SUV appear minimal.

No technical details of the drivetrain have been made public, though BMW confirms its R&D operation in Munich, Germany, has been testing a small fleet of 5-Series GT prototypes fitted with a fuel-cell-stack drive system under joint development with Toyota since 2015.

At a technical workshop in 2015, BMW revealed a 5-Series GT prototype using a hydrogen fuel-cell stack in combination with a two-speed transmission and rear-mounted electric motor developing up to 188 hp.

To display the packaging possibilities of its alternative drive system, BMW also constructed a prototype based on the i8 in 2015. It used a similar hydrogen fuel-cell stack in combination with a more-powerful 242-hp electric motor.

Since then, BMW is rumored to have added plug-in hybrid capability to its fuel-cell program by adding a lithium-ion battery in a process similar to that offered by Mercedes-Benz with its GLC Fuel Cell.