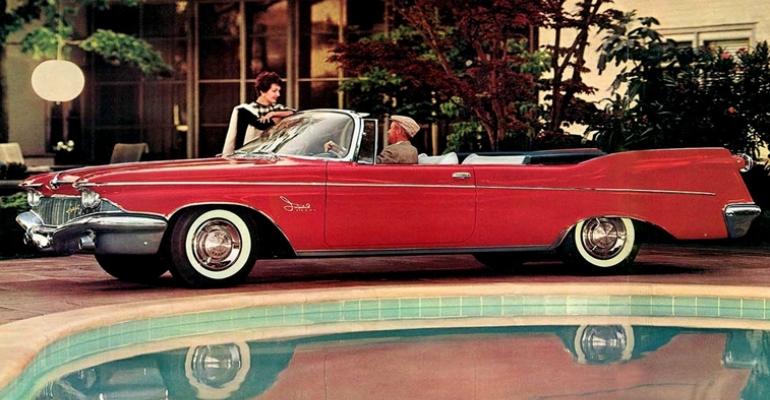 New-car demand is so strong automakers are operating assembly plants at 115% of straight-time capacity, according to Ward’s Automotive Reports. The newsletter says an average of 25,980 cars are assembled daily, or 3,330 more than the industry has the ability to complete on a single-shift basis. To accommodate the extra volume some plants are operating a second shift, while others are using daily overtime and Saturday work. However, capacity utilization varies sharply across the industry. General Motors, Ford and Chrysler combined are building at more than 120% of single-shift capacity. Independents are running at less than 90% with Kaiser-Frazer operating at only 47% and low-volume Crosley at just 15%. An exception among the independents is Studebaker. Its plants are building cars at 150% of capacity, indicating many hours of overtime are being employed to meet demand.

ridiculously small amount of money in the hands of an expert designer,” says WAR. Utilizing the same body structure as before, the redesigned hood, grille and front fenders, along with revised side trim, give the car a radical new look. “The dollar outlay could not have been much more than many other producers have spent on almost insignificant face-lifting.” Studebaker has opened the eyes of the industry as to what can be realized by simple front-end modification, WAR notes.

Chrysler is rushing ’50-model styling changes for the cars it spent more than $90 million redesigning for ’49. The revisions were ordered when “it was realized that the ’49 models were not all that was desired stylewise.” Revised roof panels, rear fenders and quarter panels and a redesigned trunk lid are among the changes. New dies have been rush-ordered with the goal of commencing output of the updated models in mid-November rather than the previously planned January-February timeframe. However, given the time needed to make the dies, the changeover likely will not be accomplished until mid-December with Plymouth leading the move.

On Labor Day, the U.S. steel industry strike reached 55 days, tying that of 1952 as the longest-running steel walkout in the post-war era. While automakers have stockpiled the types of steel used in quantity, spot shortages have developed in materials used in trim components. That could bring output of the new ’60 models to a halt sooner than had been expected. In addition, a strike that lasted into October-November could imperil the supply of steel for body panels due to lack of iron resulting from the normal winter shutdown of Great lakes shipping. If the walkout continues to Oct. 16, it would bring to 256, the number of work days in a year, the amount of time consumed by steel-industry strikes since 1945.

Chevrolet’s new Corvair compact car will debut at dealers on Oct. 2 with a base price of $1,810, excluding destination charges and federal excise tax, for the 500-Series 2-door coupe. The most expensive model at introduction will be the upscale 700-Series 4-door sedan at $1,920. Powered by a rear-mounted, air-cooled, horizontally opposed 6-cyl., the car features a “streamlined big-car silhouette, thanks to its low center of gravity, wraparound rear window and extended rear roof overhang.” The traditional front grille is replaced by a winged Corvair emblem on a concave panel. The rear deck lid features slots to aid engine cooling. A station wagon is in the offing now that engineers have relocated accessory mounts to enable an acceptable rear load-floor height. However, it is not expected to appear in the ’60 model run.

Retailer Montgomery Ward announces it is opening its largest automotive service center Sept. 17 at its store in the new Wonderland Shopping Center in Livonia, MI. The 15,150-sq.-ft. (1,408-sq.-m) facility is built to accommodate standard-size cars, domestic compacts and small import models. It employs four methods of lifting cars for service to accommodate all vehicle sizes.

Chrysler’s ’60-model Imperial features the most extensive changes since ’57, when it became a separate line. Still, it retains its characteristic “gunsight” taillamps and distinctive faux spare tire on the deck lid. However, LeBaron variants will have a smaller rear window along the lines of so-called “town cars” from earlier decades. New for all Imperials is a high-back driver seat, electroluminescent instrument lighting, improved Auto Pilot speed control, power 6-way front seats and automatic swivel seats. It will be the first ’60 model to appear from Chrysler when it bows Oct. 2.

Commenting on the design of Ford’s restyled ’60 standard-size cars and the all-new Falcon compact, WAR editors gush, “Never in all its illustrious history have Ford brands been as beautifully styled. They should register a powerful appeal to prospective buyers.” Commenting on the Falcon, the newsletter notes, “In road testing the Falcon we recorded average fuel economy of 32.9 mpg (7.2 L/100 km). It bears the earmark of a fine engineering job and should compete importantly in U.S. and overseas markets.”

In its Sept. 15 issue, Ward’s tells readers, “Ford Motor Co. has severed its association with the former GM executive who had been president for 19 months.” It is part of an executive realignment that eliminates the office of the president, while the Chairman and CEO (Henry Ford II) retains those titles. “As part of the change, three major operating groups now will each be headed by its own president reporting to the chairman, who is a grandson of the automaker’s founder.” At a press conference, the Ford chairman expressed appreciation for the work of the former president, “even though things didn’t work out as I hoped they might.”  At his own press conference, the former president (Semon E. Knudsen) said he was puzzled at being dismissed, saying he was “informed by the chairman on Sept. 2, I would be leaving.” He said he had been looking forward to a long and happy relationship with Ford.

Chrysler-Plymouth is readying a version of its Roadrunner muscle car along the lines of the recently introduced Dodge Daytona. Like the Daytona the Plymouth variant will feature a shark-nose front end and a tall rear spoiler. C-P hopes to build between 1,500 and 2,000 units before December. Dodge has “electrified” the racing world with the Daytona, WAR says, calling it “a truly impressive muscle car that was unveiled in Dallas, TX, in late August.” Aimed at winning races on the long NASCAR oval tracks, a limited number also are being marketed for street use to qualify it as “production” car. According to one reporter at the Daytona’s press preview, “it idles like a coffee can full of rocks and offers power-plus, almost a car you have to see and hear to believe.”

A number of new safety regulations are being implemented on ’70 models or under study by the Federal Highway Admin. Among the rules taking effect on Jan. 1, 1970, are a requirement of a locking steering column that immobilizes the steering, ignition and transmission, while so-called “pop-out” windshields are outlawed. Other changes for ’70 include a requirement for both side-marker lights and reflectors. Previously only one or the other was required. Glove boxes must now be equipped with a lock strong enough to keep them closed in a crash, turn signals have to be brighter and concealed headlamps must be fully uncovered within three seconds after actuation. Side-intrusion barriers, such as those already in use on most GM and several Chrysler cars, are being looked at for ’71 or later. One controversial item, airbags, is on the safety agenda for ’72, but FHWA says there is still some work to be done. A big problem is how to trigger the airbags so that they will inflate only in a collision.

On Nov. 1, some 200 Porsche-Audi dealers will open for business selling a full line of cars. That date marks the debut of Volkswagen of America’s new Porsche-Audi division. It is VWA’s first foray into the medium- and high-price sedan and sports car segments. The move is seen as a response to the planned introduction of domestic subcompacts, a segment heretofore the province of imports and dominated by the VW Type I or “Beetle.” Audi’s 100 LS and Super 90 models will sell the $2,800 to $3,500 range compared with $1,800 for the Beetle. In addition to several 911 variants, the Porsche lineup will include two new mid-engine models: the 914, powered by Volkswagen H-4, and the 914/6 with an air-cooled Porsche 6-cyl.

Association of Renault and Chrysler for Automotive Development is the name of the new joint venture that will develop and build a small Jeep SUV as its first model, beginning in 1992. The vehicle will be built and sold by Renault in Europe and by Chrysler in North America. Code named “JJ,” the new Jeep is said to be about the same size as the current Suzuki Sidekick/Geo Tracker.

Buick tells reporters at its ’90-model press preview the Tuned Port Injection variant of GM’s 3800 V-6 will be exclusive to the midsize Regal in ’90. The 3.6L TPI engine produces 170 hp and 220 lb.-ft. (299 Nm) of torque compared with 165 hp and 210 lb.-ft. (285 Nm) or torque for the 3800 SFI engine. In addition to more power, the 3800 TPI eliminates the exhaust-gas-recirculation system. Responding to criticism that the engine does not feature the overhead camshafts now in vogue among imports, division officials say, “Our customers don’t want to wait until 4,200 rpm to feel something,” adding, “If it doesn’t help you sell the car, can you justify it?” Meanwhile, the division’s exclusive cathode-ray-tube touch-screen control has been dropped from the Riviera for ’90. “Buyers had a love-hate relationship with the CRT and we finally decided it was not for the majority of our customers,” Buick’s general sales manager says.

Ford reveals it is seeking a 15% share in Jaguar, a moved greeted with hostility by the British maker of luxury sedans and sports cars. Such a move could lead to a complete takeover after the British government’s 15% ceiling on foreign ownership of Jag expires at the end of 1990. Ford of Europe officials say that if the Dearborn automaker’s “involvement” in Jaguar should increase in the future, it would maintain the company as a separate and autonomous builder of prestige cars.

A prototype of Buick’s upcoming ’92 large rear-drive sedan is being assembled for testing at GM’s Warren, MI, Tech Center. It is based on the same GM 300/350 fullsize car platform that underpins the all-new ’91 Chevy Caprice. But is several inches longer and 150 lbs. (68 kg) heavier. Although Buick plans to revive the long-dormant Roadmaster nameplate for the car, some insiders irreverently refer to it as the “Roadmonster” due to its size and “powerful” 5.7L V-8.