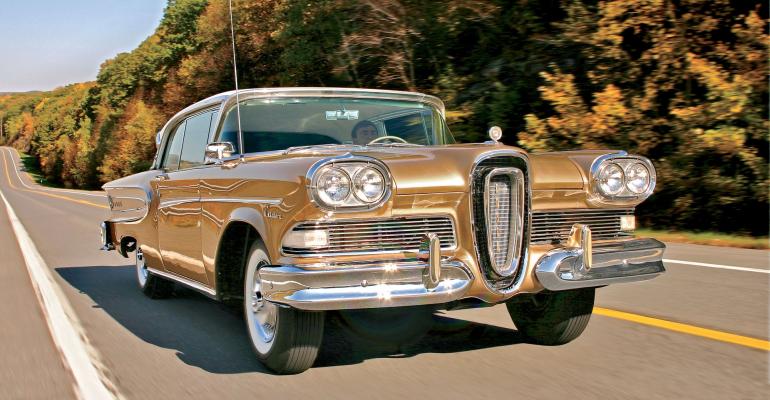 Post-war car maker North American Motors is expected to begin production of its first model, a 2-door sedan, in fourth-quarter 1948. Ward’s Automotive Reports says the car initially will utilize traditional body-on-frame construction, but later change to unitized construction. The switch may coincide with the introduction of a sport coupe and convertible. Likewise, the car initially will be powered by a 6-cyl. engine obtained from suppliers Continental, Hercules or both. That later will be replaced by an inhouse engine capable of delivering 35-40 mpg (6.7-5.9 L/100 km) fuel economy using a design called “controlled combustion.” The 100-in. (2,540-mm) wheelbase car will be assembled at a plant in Grand Prairie, TX, a former North American Aviation facility. The automaker is targeting first-year production of 40,000 units. Priced at $1,095-$1,100, excluding taxes and destination charges, the Cortez will feature a plastic interior that “can be washed just like the exterior.”

A strike at Carter Carburetor is impacting production schedules only a few short weeks after the walkout at body supplier Murry was settled. Some makers are cutting production, while others are using alternative methods to keep lines rolling. Nash-Kelvinator, for example, is shipping its upscale Ambassador to dealers minus the carburetor, although it has stockpiled enough carburetors of the type used on the smaller Nash 600 to keep shipping those models ready to run. Meanwhile, Kaiser-Frazer says it solved a mid-month sheetmetal shortage by airlifiting 47,168 lbs. (21,395 kg) of the material from Buffalo, NY, to its Willow Run, MI, plant in six flights.

Commenting on General Motors plans for restyled C-body ’48 models, WAR says, “Buick, long an industry style leader, reportedly will have new bodies that are more attractive than ever,” adding that an “infinitely variable speed transmission rather than the step-by-step type is likely to be an important new feature.” Although Cadillac will sport all-new bodies, the publication notes, “mechanical advances could be difficult to achieve in this almost perfect series of automobiles.” Meanwhile, a heavy order backlog means Pontiac will see few changes aside from those trim modifications needed to distinguish ’48s from ’47s. However, the popular Hydra-Matic automatic transmission “probably will be optional on these fine cars.”

A WAR poll of auto writers and “auto journal” editors attending the recent unveiling of the all-new Edsel reveals strong support among the automotive press for its “styling advances.”  The publication says, “one after another of these critical observers said they liked the Edsel design.” A single exception was one Chicago auto writer who felt the rear-fender sculpturing was too much like that of the ’57 Mercury. Still, “he thought the car generally was pleasingly fashioned.”

The UAW strike fund could be at a record high by the time contract bargaining opens in spring 1958, giving the union added muscle in negotiations. As of the end of August, the 1.5 million-member union had $23 million banked. The fund is expected easily to top the $25 million it contained when the last round of talks began in 1955, if the UAW moves ahead with a special strike assessment on its membership. Current Big Three contracts begin expiring in June 1958 with preliminary talks expected to start 60 days before that.

Buick’s ’58 lineup will feature a new top-of-the-line model called Limited, reviving a name last used by the division more than a decade earlier. Available in 2- and 4-door hardtop and 2-door convertible body styles, the Limited is seen as a better-appointed variant of the Roadmaster series, sporting an 8-in. (203-mm) rear-deck extension. Buick expects to build 125,000 ’58s in all series by Dec. 31, 1957, up from 106,000 of the ’57 models assembled in like-1956. Other features on ’58 Buicks include an improved triple-turbine Dynaflow automatic transmission, aluminum brake drums on most models and an optional air suspension.

While manual transmissions continued to lose ground to automatics in model year ’57, automakers don’t expect them to die off any time soon. According to a Chevrolet engineer, “While the automatic transmission has moved upward in popularity toward two-thirds of our car output, the manual shift is here to stay for years to come. Specialized demand for the manual transmission should persist for another decade, if not longer.” Only 20.7% of all ’57-model domestic-make car were built with a manual gearbox, down from 26.2% in ’56 and 32.2% in ’55. That compares with 75% in the ’49 run. Only four makes, Chevrolet, Ford, Plymouth and Rambler, account for 94% of the manual-equipped ’57 cars turned out. Most of those were in the lowest-line models such as the Chevy One Fifty, Ford Custom and Plymouth Plaza.

International Harvester’s new Travelette sports a body style unique to the pickup segment, having front and rear seats and three doors. Thus it has 6-passenger capability compared with just three passengers for rival models from GM, Ford and Chrysler. It rides on a 129-in. (3,277-mm) wheelbase in rear- or 4-wheel-drive variants. It has a 6-ft. (1,829-mm) pickup bed and can handled loads of up to 1 ton. Buyers have a choice of 141- or 154-hp I-6 engines. “Thus the discriminating buyer wanting a stylish personal car or rugged material hauler will be attracted to the Travelette,” WAR says.

Having failed to reach an accord with strike-target Ford, UAW workers walk off the job at the automaker’s U.S. plants Sept. 6. Ford, GM and Chrysler previously made contract offers amounting to a 5% wage increase, along with enhanced benefits. Among the offers details was an immediate 13-cent hourly pay hike with further gains of 2.8% annually in 1968 and 1969. It also contained a special wage hike for skilled-trades workers, as well as increased pensions and supplemental unemployment pay. Terming the package “inadequate and inequitable,” the union accused the automakers of “collusion” and of planning to lock out members after the old contracts expired. The union also said the offer did not address its key demands: a guaranteed annual wage and U.S.-Canada wage parity. Ford strike losses for the month totaled 107,000 cars and an unspecified number of trucks. At the same time the UAW also has turned down a request from American Motors to extend its contract two years beyond the mid-October expiration date due to current financial difficulties. However, the union said it might take another look at the AMC proposal once new contracts are in place at the Big Three. Meanwhile, members of the International Society of Skilled Trades, a group of workers attempting to pull away from the UAW, called strikes at GM plants in Flint and Saginaw, MI. However,  production losses were minor as most UAW members ignored the ISST picket lines.

Is Ford’s Allegro II roadster a tip-off to a new product?

That question is pondered by WAR editors after Ford officials described the new concept car as another example of the automaker’s generation-by-generation approach to the development of vehicles that ultimately contribute to production-car design. Executives cited the progression from the small Mustang I and larger Mustang II concepts to the final Mustang production variant as an example of the company’s work. Unveiled at the Oklahoma State Fair, Allegro II is a roadster variant of the Allegro fastback couple that is more than 8-ins. (203 mm) lower in overall height. Like the coupe, it features adjustable foot pedals, and the steering wheel is mounted on a cantilevered arm extending from the centrally located steering mechanism.

A 9-day strike at GM’s Lordstown, OH, metal fabricating plant that began Aug. 27 was costly for the automaker in terms of lost production. Ultimately closing 10 North American assembly plants due to lack of parts, the walkout resulted in the loss of 45,000 cars and light trucks. The bulk of the loss, 39,000 vehicles, was in September. Although the struck plant resumed operation the weekend of Sept. 5-6, it took almost a week to get all assembly sites up and running as parts filtered in. Lordstown assembly lost the most production due to the strike: 11,900 Chevrolet Cavalier and Pontiac Sunbird cars. Although it and many other idled assembly plants have the ability to make up lost production over a number of months, that is not the case at the Spring Hill, TN, Saturn facility. Already operating close to capacity, Spring Hill has little chance of recouping the 7,000 cars lost to the shutdown.

Chrysler has initiated two separate recalls for its all-new LH large cars. Although they officially go on sale in November, nearly 3,000 already have reached customers. In the largest move, the first 4,000 Chrysler Concorde, Dodge Intrepid and Eagle Vision models off the assembly line were called back to replace an improperly made washer that potentially could affect the steering system. In the second recall, 1,600 cars were to be repaired for improperly installed piston-pin clips that could cause the 3.6L V-6 to shut down. None of these cars have reached buyers and those in dealer hands will be recalled to the plant, repaired and use internally, the automaker says.

A revised version of the American Automobile Labeling Act has been inserted into a transportation spending bill expected to gain Congressional approval and be signed into law by President Gearge Bush. The bill, supported by the Big Three and the UAW, requires that all automobiles sold in the U.S. include a label listing the percentage of U.S./Canada content, the origin of the engine and transmission, the name of any foreign country supplying 15% or more of the content and the name of plant where the vehicle was assembled.  Many importers oppose the bill because the content calculations are based on the origin of the parts excluding labor. Thus domestic content of transplant-built vehicles will be lower. The legislation likely will “cause considerable consumer confusion,” says Jack Reilly, chairman of the Association of International Automobile Mfrs.

Chrysler Chairman Lee A. Iacocca confirms earlier reports the automaker plans to move its corporate headquarters from its long-time home in Highland Park, MI. It will relocate to a new building on its technical-center campus in Auburn Hills. Iacocca says the automaker’s situation has “changed drastically” since it bowed to political pressure in 1986 to keep some operations in Highland Park, a city heavily dependent on Chrysler’s tax revenue. It will take about three years to design, build and completely staff a new administration facility at Auburn Hills, the chairman says. After the move is completed, only about 500 workers will remain at the old facility, performing operations that are said to be too costly to move at the present time.