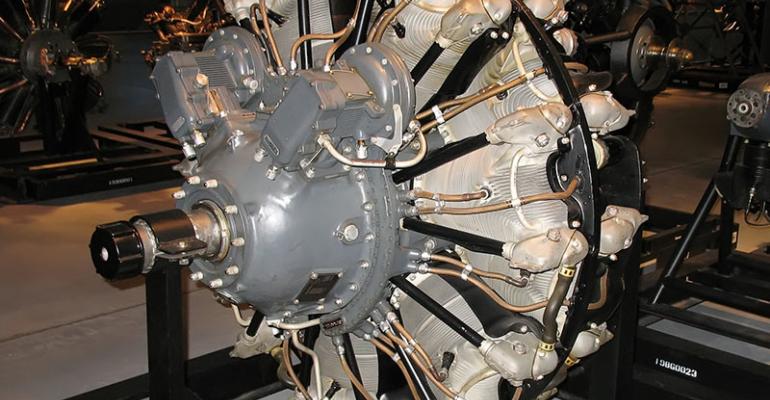 Construction of a new aircraft-engine plant will begin by the end of the month on a site adjacent to Ford’s Dearborn manufacturing complex. The $4 million plant is expected to be completed by the end of the year, after which $11 million will be spent tooling it to build Pratt and Whitney high-output engines for military aircraft. It will employ 10,000 workers, about half of them culled from the ranks of existing Ford employees.

At the same time, ground is being broken in the Detroit area for a new $20 million government ordnance plant to be operated by Chrysler. Output of Army tanks is slated to begin there in about a year with 4,500 workers. In addition, Eaton is constructing new buildings at its Cleveland, OH, and Saginaw, MI, plants for production of as yet unspecified defense products.

In a presentation at the annual convention of the American Chemical Society, General Motors researchers say the use of 100 octane gasoline and a 10:1 compression ratio could boost automotive fuel economy 45%-70% and enable the use of much smaller displacement engines compared with those currently employed. The presentation also noted that fuel economy would improve immediately “if car buyers would not make excessive performance demands.”

The redesigned ’41 Ford cars, unveiled Sept. 26, have a longer wheelbase, greater overall length and increased width. The new dimensions provide more interior space including a front seat that is 7-ins. (178-mm) wider than in ’40 models. As yet unconfirmed, Ford is expected to launch a 6-cyl. engine in some models by the end of the year. In addition, the revised ’41 Mercury line has been expanded to include a coupe and station wagon. Interiors have been upgraded and the front and rear transverse leaf springs have been revised to improve ride comfort.

Widespread strikes and growing absenteeism threaten to curtail the industry’s ambitious plans to build nearly 750,000 cars and trucks in the final four months of 1945, according to Ward’s Automotive Reports. In a front-page story in it Sept. 15 issue, WAR says, “Apparently the emotional influence behind the reluctance of workers to stay on the job, now that the war has ended, is so deep-rooted that it must be dispelled before there can be a hope of satisfactory attendance again.”

An unauthorized strike at Kelsey-Hayes already is responsible for Ford’s inability to meet its quota of 426 car assemblies daily this month. Due a lack of parts, the Dearborn automaker built only 264 cars through Sept. 11, followed by 301 units from Sept. 12 through Sept. 14. Output at other manufacturers has been likewise impacted. In addition to Kelsey-Hayes, labor troubles also have curtailed output at supplier plants operated by Spicer, Clark Equipment, Packard Electric and Bundy Tubing. The UAW-CIO is reportedly seeking across-the-board pay raises of 30%.

Suppliers have so far refused government requests to buy back surplus components purchased during the war and now stockpiled in Army and Navy warehouses. Parts makers are reportedly insisting on a complete listing of components by original part numbers and the cleaning of metal parts coated with rust inhibitors before they will consider the government’s request. Many of the parts could be used to alleviate some existing shortages, but suppliers fear they could encounter extensive costs in sorting and cleaning the components before they could be used.

Automotive newcomer Kaiser-Frazer is moving ahead with plans to introduce its all-new lineup of cars by mid-1946. Styling of the cars, including the Kaiser, in the $1000 price class, and the Frazer, retailing at about $1,500, is said to be very advanced. K-F has leased the government’s former bomber plant in Willow Run, MI, to build its cars, in addition to a plant on the West Coast that will serve as an assembly only site. Heading the company are a “successful automotive executive (Joe Frazer) and a personage (Henry J. Kaiser) who has made a reputation as a contractor, dam and ship builder, and a genius at mass production.” A public offering of 1.7 million shares of common stock reportedly is oversubscribed. That, along with a $5 million investment by Graham-Paige and Kaiser interests is said to bring total capitalization to $20 million after paying underwriting costs.

Chrysler and the UAW-CIO have inked a new 3-year contract that generally follows the pattern laid out in the Ford and GM agreements. Covering 139,000 workers, the Chrysler pact includes supplemental unemployment benefits for all plant employees, SUB pay for office workers (unique to Chrysler), higher pension benefits and modest pay increases. Also included are a boost in the annual improvement factor, higher night-shift pay, improved COLA and a full union shop. The agreement also gives the UAW the right to strike over production standards.

At the same time, American Motors, following an 8-hour strike, is the first of the independents to sign a new labor agreement. The AMC settlement includes most of the provisions of the Big Three pacts, but gives the No.4 producer a year’s reprieve in meeting the call for a guaranteed annual wage.

Also new is push-button activation of the optional automatic transmission that prevents the car from starting in any gear except neutral and will not allow the transmission to be shifted into reverse at speeds above 10 mph (16 km/h). An under-dash Highway Hi-Fi record player is available at extra cost.

It is powered by a 425-cid (7.0L) V-8 engine producing 385 hp via its new Quadrajet 4-bbl. carburetor. The engine is mounted longitudinally, slightly offset to the passenger side of the car, with the 3-speed automatic transmission mounted just to the left of the engine. A newly developed drive chain transfers power from the engine-mounted torque converter to the input shaft of the transmission. The front-drive setup gives a completely flat floor for increased center-passenger legroom.

​Olds officials forecast first-year sales of 60,000-plus units, but building more than 65,000 units in a single calendar year would require adding a second shift. Production began Aug. 16 and is currently scheduled at 4,500 units monthly.

Based on WAR’s survey of production in 16 leading countries, world car output in January-May is up 8.4%, to 8,252400 units from 7,614,900 in like-1964. However, the newsletter says most of that increase is due to rising production in the U.S. and Canada. If output from those countries is excluded, the net worldwide gain is a mere 5,000 units. Accordingly, the U.S. accounts for 61.6% of the cars built worldwide in the first five months of the year, compared with 48.0% a year earlier. West Germany ranks second, with a 14.4% share as against 14.9%, and the U.K. is third, at 9.2% vs. 11.0%. Canada ranks sixth, right behind France and Italy and ahead of Japan. “What gains, if any, Russia is making in automobile production still is a big U.S.S.R. secret,” WAR says.

AMC officials, speaking at the automaker’s ’66-model press preview, say they are satisfied with how sales of the midsize Marlin sporty car are progressing. Since its mid-March intro, Marlin deliveries have averaged “a very satisfactory” 1,000 units monthly and no major changes are planned for ’66. Like other midsize AMC models, Marlins equipped with a 6-cyl. engine and manual transmission will feature a clutch that is self-adjusting over its entire service life. The new clutch design is the only one offered in the U.S., according to AMC.

Dodge soon will introduce its midsize sporty car dubbed Charger. It is based on the intermediate Coronet body but features a long fastback roofline and short trunk lid. Although many of the body panels are shared with the Coronet, Charger will accommodate only four passengers in individual bucket seats. A 273-cid (4.5L) V-8 reportedly will be standard equipment, with options including a 383-cid (6.3L) V-8 and a 426-cid (7.0L) Hemi engine.

The ’91 Pontiac lineup will have no turbocharged engines for the first time in 11 years.

Unveiled for the automotive press in mid-September, the division’s ’91 lineup has a new 3.4L, 24-valve, double-overhead-cam V-6 engine (the largest domestic multi-valve engine) replacing the 3.1L V-6 turbo in the high-performance Grand Prix GTP, while a naturally aspirated version of the “3.1” replaces the turbo I-4 previously used in the Sunbird GT. Pontiac General Manager John Middlebrook says the division is able to trim the GTP’s price by $3,000, in part because of the new engine. Other sources say Pontiac was concerned about the long-term durability of turbocharged engines. The multi-valve 3.4L V-6 also will be shared with certain Chevy Lumina and Olds Cutlass Supreme variants.

WAR says it has learned from “well-placed” sources in Turin, Italy, a Chrysler-Fiat deal is already done and will be announced within weeks. Reportedly, the two automakers have agreed at least to a joint venture involving the production and marketing of the American automaker’s SUVs in Europe and joint development of Fiat cars to be built and sold by Chrysler in North America. Chrysler will only confirm that “talks continue.”

If, as expected, clean air regulations now being reviewed by the California Air Resources Board are put into effect, automakers will be required to build and sell zero-emissions electric vehicles by the end of the decade. The regulations also are expected to curtail sales of diesel-powered light vehicles in the state, due to tougher NOx standards. GM has promised to meet the regulations with a production version of its Impact electric car, while Chrysler is developing a battery-powered variant of its minivans. Francois Castaing, Chrysler engineering vice president says, “Electric vehicles are not a very effective way to move people around since the range is so limited.” But he says Chrysler is going to be there, “hopefully.”

Despite the need to meet the 27.5-mph (8.6 L/100km) federal fuel economy mandate, Ford plans to continue selling its Crown Victoria, Mercury Marquis and Lincoln Town Car large rear-drive sedans by reclassifying them as “imports.” To do that, production of major subassemblies will moved to Mexico and shipped to Ford of Canada’s St. Thomas, ON, Canada, final assembly plant. Michelin tires also will be sourced from outside the U.S. and Canada. Already being phased in, the changes will become fully effective with the redesigned ’92 models. At that point the lower fuel economy of the large cars will be tabulated with that of South Korea-built Ford Festiva and the Mercury Capri, built in Australia.