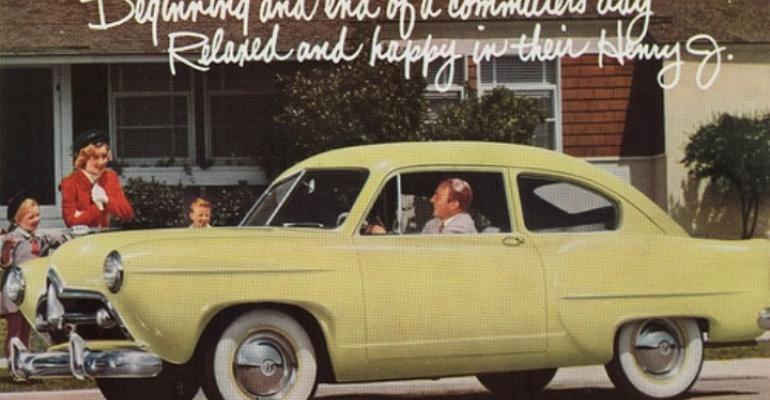 A tour of Oldsmobile’s Lansing, MI, engine plants reveals the extent of modern tooling used to manufacture the division’s new Rocket V-8 engine, Ward’s Automotive Reports notes in its Oct. 3, 1949, issue. Although the “old” facility used to make the division’s I-6 is not out of date its manufacturing processes are accomplished the “hard” way when compared with the V-8 plant. In making the Rocket engine “manual operations, and consequently human errors, are kept to a minimum.” Automation guides the manufacture of the engine block from rough casting to finished product, each step being held to “almost unbelievable dimensional tolerances.” Because of that “it may well be that the V-8 is little if any more costly to build than the “six.” Industry engine producers, including other General Motors divisions, could profit considerably from close study of the Rocket’s metal working machinery, WAR says.

If the steelworkers’ strike continues through October, output by independent truck makers may be curtailed sooner than had been anticipated despite steel stockpiles. The problem lies with suppliers that have labor contracts with the United Steelworkers union that begin expiring Oct. 15. Strikes are expected if new contracts are not in place when the old agreements end. A major stumbling block both in the steel industry and in UAW-Chrysler talks are pension demands. The recent UAW-Ford contract includes company-funded pensions. After initially refusing to consider pensions, Chrysler was set to offer a plan that required worker contributions. But that now is considered a non-starter from the UAW’s viewpoint. At the same time, workers at Chrysler body supplier Briggs have voted to strike in support of pensions.

Widespread complaints about exhaust fumes accumulating in car and truck bodies will be heard as long as manufacturers continue their malpractice of locating heater air intakes low at the front the vehicles, Ward’s says. The danger is greatest when vehicles are lined up bumper-to-bumper in congested traffic and at bridge, ferry and tunnel approaches.  Heaters then suck in poisonous carbon monoxide from the tailpipe of the vehicle ahead and carry it into the interior. Having the air intake in the form of an air scoop in the cowl area, as in Studebaker and Nash designs, would eliminate the danger and probably benefit sales of makes now using the inferior type system, the publication notes. 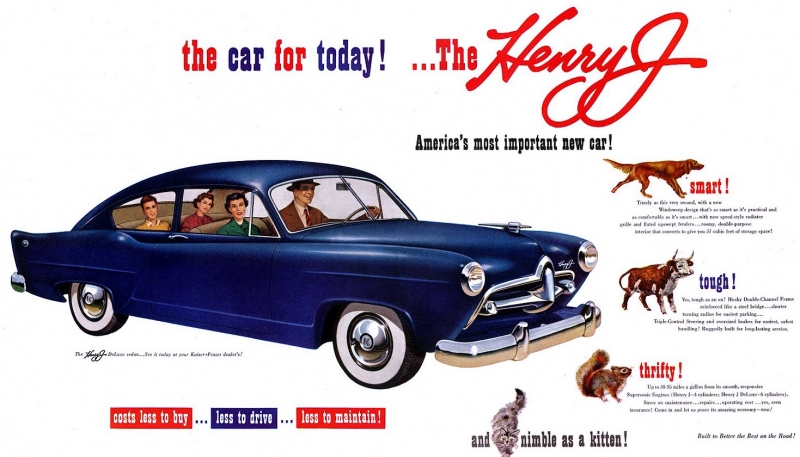 Engineers and planners at Kaiser-Frazer are said to be busy mapping out all-new models for ’51, now that the federal government’s Reconstruction Finance Corp. has loaned the automaker $34.4 million. Also in the works is a facelift for the ’50 models along with development of a “stripped down” light car in the lowest price class. In addition, K-F is reportedly making plans for a small assembly plant in Portland, OR, its first outside the Detroit area.

In the field of automatic transmissions, Ford reveals it is working with Borg-Warner to perfect a torque-converter type it expects to offer for $150. WAR says it is “somewhat similar to Buick’s Dynaflow in that the hydraulic torque converter becomes a fluid coupling after initial acceleration.” This “obviously” is less expensive than the clutch-type that results in a direct mechanical connection to the engine, as used in Packard’s Ultramatic. The latter is “decidedly more efficient in that it avoids the ‘slip-loss’ of the fluid coupling, but even held to what some say is  a profitless level, Ultramatic costs $225 vs. Dynaflow’s $212.” Chevrolet’s upcoming automatic is said to be a “junior” Dynaflow that will sell for $100, not counting an extra charge for a more powerful engine to be used with it. Meanwhile, buyers of Chrysler, DeSoto and Dodge cars apparently like the less sophisticated semi-automatic transmission option on those models. In the ’49 model run 97.3% of Chrysler and 98.6% of DeSoto buyers opted for the device. Although just 20% of Dodge cars were so equipped, that was due to lack of transmission manufacturing capacity rather than lack of interest. September 1959 (58 Years Ago): Pontiac Air-Cooled Engine; Valiant Alloy Slant Six; September Car Sales Off

In a Special Bulletin dated Oct. 12, WAR tells readers that contrary to earlier reports it now appears Pontiac’s new compact car for ’61 will use an enlarged version of the Corvair’s air-cooled “pancake” 6-cyl. engine. And like the Corvair, the Pontiac’s engine will be rear-mounted. At the same time, Buick and Olds are moving ahead with medium-price compacts featuring an aluminum-block V-8. However, unlike earlier reports, the V-8 will use conventional aluminum alloy with cast-iron cylinder liners rather than high-silicon aluminum. The latter material poses cylinder-wall lubrication problems, engineers say.

Insiders say Chrysler is working on an all-aluminum version of the new 170-cid (2.8L) I-6 powering the all- new ’60 Valiant small car. Like GM’s lightweight V-8, the alloy Slant Six will use iron cylinder liners. However, even the iron-block Valiant engine sports a number of advanced features, including a ram-induction intake manifold. The engine’s 30-degree slant provides room for the long ram-induction intake runners that help bring about a 10% improvement in power at the rear wheels, better fuel economy and faster acceleration at highway speeds. In addition, a larger 225-cid (3.7L) variant replaces the venerable PowerFlo flat-head I-6 in ’60 standard-size Dodges and Plymouths.

Except for recession-year 1958, September’s domestic-make new-car average daily selling rate was the lowest since 1951. The lengthy steel strike and resulting unemployment receive much of the blame, but lower inventory by overly cautious dealers also is faulted, as is advance publicity about a raft of all-new ’60 models soon to debut at prices largely unchanged from ’59.

“Chrysler’s head stylist is worthy of an award equivalent to moviedom’s Oscar for the Valiant’s fresh and exquisite design,” according to WAR. In addition, “Chrysler engineers should receive a Society of Automotive Engineers conferment for the many technical advances incorporated in the corporation’s ’60 cars.”

In other news, Ward’s says Ford Galaxie is the industry’s single largest-selling trim series in 1959 through September, outselling rival Chevy Impala by 16,000 units, while the Ford Custom 300 narrowly missed 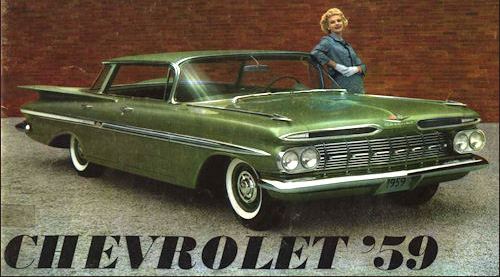 stealing second place from Impala; Mercury’s upcoming Comet compact will use the basic Falcon body shell but on a longer wheelbase with extended rear quarters to increase luggage space. Canted rear fins give it a unique look; likewise, Dodge is said be to readying a compact car for ’61 using the Valiant body with new front and rear styling; GM says research shows women cast the final vote in 75% of new-car purchases, even though they hold only 33% of all driver licenses.

GM’s much-talked about XP-887 subcompact car now is expected to bow in fall 1970 as a ’71 model. Earlier reports indicated it would bow in the spring, but with revamping of the Lordstown, OH, assembly plant running behind schedule a fall unveiling now is more likely. According to the newsletter, people who have seen the new car give it rave reviews for interior roominess, the “zestful” performance of its 2.3L aluminum 4-cyl. engine and the development work levied on its suspension. Ford also is slating a fall debut for its Phoenix subcompact that is said to be somewhat small than the Chevrolet car. Meanwhile, AMC will be the first domestic automaker entering the subcompact foray with its Gremlin. Output is set to begin with 700 units in December. First-year production is scheduled at 21,000 cars. 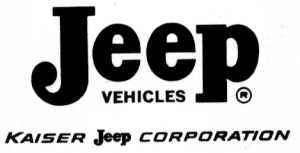 AMC announces it has reached an “agreement in principle” to purchase Kaiser Jeep. The agreement inked Oct. 20, provides for payment by AMC of $10 million cash, 5.5 million shares of capital stock and some $10 million in negotiable notes. The deal is contingent on the results of an audit of Jeep’s books as well as board and shareholder approval.

GM is implementing a rationalization program for building its various truck lines. When fully implemented, GMC will build only medium- and heavy-duty trucks at plants it operates, including the recently introduced Class 8 models that make Chevrolet a full-line truck maker for the first time. All light-truck output will be handled by assembly plants operated by Chevy and General Motors Assembly Div. Timing of the changeover hinges on completion of GMAD’s new Lordstown light-truck plant.

Highlighting Datsun’s ’70-model lineup is a new 2-passenger, hatchback sports car called the 240-Z. Available in early January, the Z-car is powered by a 2.4L OHC I-6 and carries a P.O.E. list price of $3,500. The Datsun 2000 convertible sports car again will be offered in ’70 with no price increase.

The second reincarnation of Chrysler’s Imperial in nine years is set for the ’90 model run. The latest $25,495 iteration is based on the front-drive Y body shared with the Chrysler Fifth Avenue. It is a long-wheelbase version of the Chrysler New Yorker/Dodge Diplomat C-body. Imperial differs from the Fifth Ave. in having unique front and rear styling and a more-formal roofline. It will begin appearing in dealer showrooms in November after output starts with 1,700 units in October. Chrysler plans to build 13,000 ’90-model Imperials. The nameplate was last seen in ’81-’83 when it appeared as a 2-door luxury sedan based on the Chrysler-Cordoba/Dodge Mirada J-body. With controversial bustle-back styling and troublesome electronic fuel injection, just 12,385 were sold.

Ford is halting sales of its German-built Scorpio and dissolving the 4-year-old Merkur (German for Mercury) franchise carried by select Lincoln-Mercury dealers. It was Ford’s attempt to break into specialty segments of the U.S. luxury car market that began in ’85, with the sporty Merkur XR4Ti 2-door hatchback (dropped a year ago), but failed to attain forecast volumes.

A number of automaker linkups are under discussion in Europe. Among them, Ford says it stands ready to acquire 100% of Jaguar when the British government lifts restrictions on foreign ownership; At the same time Jaguar is in talks about GM acquiring a minority stake in the luxury-car maker; Renault and Volvo are exploring a merger of their firms that would create the world’s fourth-largest car maker and its largest truck builder; Ford also is bargaining for a 50% interest in Saab-Scania’s car-building operations; In Italy Fiat is discussing a merger of heavy-truck operations with those of Daimler-Benz; Honda says it is ready to acquire a 20% stake in Britain’s Rover Group, with which it has been collaborating for nearly a decade, but has ruled out a complete takeover.

Automakers tell WAR they were shocked at the Canadian federal Environment Minister’s proposal to adopt California’s upcoming strict emissions rules for all 10 provinces. The car manufacturers note the proposal would require all new cars sold in Canada to meet the regulations starting in ’94, when California regulators are allowing them to phase in changes over five years beginning in ’93. Even similar U.S. congressional subcommittee proposals don’t call for full compliance until ’98. Automakers say rules written to address air-quality issues unique to California may not be desirable for all areas of North America.